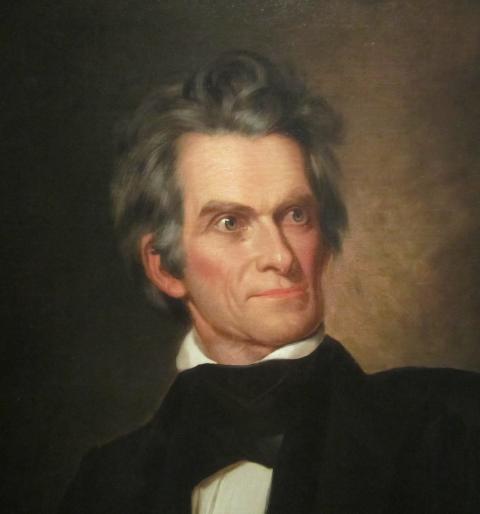 Calhoun is considered to be the last of the founding fathers. From 1810 to his death in 1850 he served as a member of Congress, secretary of war, vice president under presidents John Quincy Adams and Andrew Jackson, U.S. Senator from South Carolina, and secretary of state under President John Tyler.

Calhoun’s posthumously published essay, "A Disquisition on Government," summarized his thoughts on politics and government and is a true masterpiece in political economy. It also has ominous implications for America in light of the recent election.

Calhoun hailed the right of suffrage as "the indispensable and primary principle in the foundation of a constitutional government," but warned that in order for suffrage to serve this purpose the public must be sufficiently enlightened to understand their own rights under the Constitution and "the interests of the community," and "to appreciate the motives and conduct of those appointed to make and execute the laws." On these grounds the American public is failing miserably.

Knowledge of most parts of the U.S. Constitution is almost nonexistent in American society, which has allowed a full-scale assault on individual liberty by government; the statist, lapdog media; the state-funded universities; and the cultural elites.

The government schools not only fail to teach about the Constitution; they undermine it by brainwashing children with politically-correct, statist propaganda. Consequently, an incredible number of Americans remain unbelievably naive about the "motives and conduct of those appointed to make and execute the laws." The fact that the television show "The West Wing," which portrays the executive branch of government as comprised of a benevolent, even saintly, band of do-gooders motivated only by "the public interest," speaks volumes about the childish mentality of many Americans when it comes to government. As Joseph Schumpeter observed in 1950, the average citizen "expends less disciplined effort on mastering a political problem than he expends on a game of bridge."

Our governmental rulers understand this, which is why they bury us in an avalanche of lies and propaganda about their motives and programs. As Gore adviser Paul Begala recently stated in frustration: "All this insistence on truthfulness on the part of both candidates [Gore and Bush] is getting out of control."

Public ignorance, combined with a massive governmental propaganda machine, renders the right of suffrage almost useless in safeguarding liberty and assuring that government benefits primarily the ruled and not the rulers. Even worse, Calhoun wrote, is the tendency of democratic governments to divide the population into two groups: taxpayers and tax consumers, with the latter group employing the apparatus of the state top plunder the former group.

"When once formed, the community will be divided into two great parties -- a major and minor -- between which there will be incessant struggles on the one side to retain, and on the other to obtain the majority . . . " Consequently, "some portion of the community must pay in taxes more than it receives back in disbursements; while another receives in disbursements more than it pays in taxes." The community is thus divided into "two great classes; one consisting of those who . . . pay the taxes...and the other, of those who are the recipients of their proceeds..."

This is exactly what the USA Today county-by-county electoral map, and other post-election data, show. Gore’s core support was in the inner cities, dominated by welfare recipients (including "affirmative action" welfare); the state capitols, around which reside thousands of state and local government bureaucrats dependent partly on federal largesse; the statist intellectual class which resides largely on the east coast, especially in New England; the leftist cultural elite on the California coast (the rest of California was solidly Republican); hordes of welfare-seeking immigrants, many of whom are illegal, along the Texas border; and the environmental zealots of the Pacific Northwest and elsewhere. Families earning more than $50,000 annually strongly supported George W. Bush, whereas those earning under $30,000 were strong supporters of Gore.

Government has grown so unimpeded that the U.S. is on the precipice of being divided almost equally between the taxpaying and tax-consuming classes. As Calhoun warned, this could lead to "one class or portion of the community [being] elevated to wealth and power, and the other depressed to abject poverty and dependence, simply by the fiscal action of the government." This, too, seems to have come true in some regards. Richard Vedder and Lowell Galloway have shown that wages tend to be 25-40 percent higher in and around state capitols than in other areas of the country, a measure of the extent to which the governing class plunders the governed. And the tax burden makes it increasingly difficult for lower middle-class families to ascend the economic ladder.

The power to tax in a democracy, warned Calhoun, will inevitably be used "for the purpose of aggrandizing and building up one portion of the community at the expense of another," which will "give rise to . . . violent conflicts and struggles" between the two competing parties." There hasn’t been any violence in Florida as of this writing, although the Gore campaign has been doing its best to start a race war there with Jesse Jackson organizing mobs of blacks and telling them that racist Republicans have conspired to "disenfranchise" them. Riots are now apparently an "acceptable" electoral tactic (and have been since the 1960s).

Calhoun was also prescient in foreseeing that the enemies of liberty would say anything -- anything -- to dilute the power of the Constitution. It is "a great mistake," Calhoun wrote, to suppose that a mere written Constitution would be sufficient to protect individual liberties because the party in power will always "have no need of [constitutional] restrictions" on governmental powers.

Naive defenders of the Constitution will initially believe that it can be protected by "an appeal to reason, truth, justice, or the obligations imposed by the Constitution," whereas power-hungry statists will wage a perpetual political war against the Constitution with "cunning, falsehood, deception, slander, fraud, and gross appeals to the appetites of the lowest and most worthless portions of the community" until "the restrictions would be ultimately annulled, and the government be converted into one of unlimited powers." Does anyone deny that this is essentially the situation that U.S. citizens now find themselves in?

Calhoun’s suggested antidote to the evil of unlimited government was what he called the "concurrent majority." Under this system any community of citizens, including a state or some other group, would be given the right to veto federal legislation that it believed was unconstitutional and destructive of its constitutional rights. Calhoun believed that the concurrent majority would stop political plunder in its tracks and limit government to its constitutional functions.

The concurrent majority is a form of nullification, which existed in the U.S. until 1861 and was championed by Thomas Jefferson and James Madison in the Virginia and Kentucky Resolutions.

We had better begin seriously considering nullification, peaceful secession, and every other means possible of checking the ability of the federal government to loot the taxpaying population. For if the Left succeeds in achieving open borders, combined with a growing welfare state, then every penny of every American’s wealth and income will be up for grabs to be distributed not only to other Americans, but to welfare leaches from all corners of the globe.