GET NEWS AND ARTICLES IN YOUR INBOXPrint
A
A
Home | Mises Library | Bank Crisis! 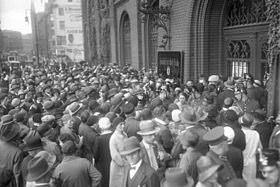 [This article is featured in chapter 78 of Making Economic Sense by Murray Rothbard and originally appeared in the March, 1991 edition of The Free Market.]

There has been a veritable revolution in the attitude of the nation's economists, as well as the public, toward our banking system. Ever — since 1933, it was a stern dogma a virtual article of faith — among economic textbook authors, financial writers, and all establishment economists from Keynesians to Friedmanites, that our commercial banking system was super-safe. Because of the wise establishment of the Federal Deposit Insurance Corporation in 1933, that dread scourge--the bank run — was a thing of the reactionary past. Depositors are now safe because the FDIC "insures," that is, guarantees, all bank deposits. Those of us who kept warning that the banking system was inherently unsound and even insolvent were considered nuts and crackpots, not in tune with the new dispensation.

But since the collapse of the S&Ls, a catastrophe destined to cost the taxpayers between a half-trillion and a trillion-and-a-half dollars, this Pollyanna attitude has changed. It is true that by liquidating the Federal Savings and Loan Insurance Corporation into the FDIC, the Establishment has fallen back on the FDIC, its last line of defense, but the old assurance is gone. All the pundits and moguls are clearly whistling past the graveyard.

In 1985, however, the bank-run — supposedly consigned to bad memories and old movies on television — was back in force, replete with all the old phenomena: night-long lines waiting for the bank to open, mendacious assurances by the bank's directors that the bank was safe and everyone should go home, insistence by the public on getting their money out of the bank, and subsequent rapid collapse. As in 1932–33, the governors of the respective states closed down the banks to prevent them from having to pay their sworn debts.

The bank runs began with S&Ls in Ohio and then Maryland that were insured by private insurers. Runs returned again this January among Rhode Island credit unions that were "insured" by private firms. And a few days later, the Bank of New England, after announcing severe losses that rendered it insolvent, experienced massive bank runs up to billions of dollars, during which period Chairman Lawrence K. Fish rushed around to different branches falsely assuring customers that their money was safe. Finally, to save the bank the FDIC took it over and is in the highly expensive process of bailing it out.

A fascinating phenomenon appeared in these modern as well as the older bank runs: when one "unsound" bank was subjected to a fatal run, this had a domino effect on all the other banks in the area, so that they were brought low and annihilated by bank runs. As a befuddled Paul Samuelson, Mr. Establisment Economics, admitted to the Wall Street Journal after this recent bout, "I didn't think I'd live to see again the day when there are actually bank runs. And when good banks have runs on them because some unlucky and bad banks fail. … [W]e're back in a time warp."

A time warp indeed: just as the fall of Communism in Eastern Europe has put us back to 1945 or even 1914, banks are once again at risk.

What is the reason for this crisis? We all know that the real estate collapse is bringing down the value of bank assets. But there is no "run" on real estate. Values simply fall, which is hardly the same thing as everyone failing and going insolvent. Even if bank loans are faulty and asset values come down, there is no need on that ground for all banks in a region to fail.

Put more pointedly, why does this domino process affect only banks, and not real estate, publishing, oil, or any other industry that may get into trouble? Why are what Samuelson and other economists call "good" banks so all-fired vulnerable, and then in what sense are they really "good"?

The answer is that the "bad" banks are vulnerable to the familiar charges: they made reckless loans, or they overinvested in Brazilian bonds, or their managers were crooks. In any case, their poor loans put their assets into shaky shape or made them actually insolvent. The "good" banks committed none of these sins; their loans were sensible. And yet, they too, can fall to a run almost as readily as the bad banks. Clearly, the "good" banks are in reality only slightly less unsound than the bad ones.

There therefore must be something about all banks--commercial, savings, S&L, and credit union--which make them inherently unsound. And that something is very simple although almost never mentioned: fractional-reserve banking. All these forms of banks issue deposits that are contractually redeemable at par upon the demand of the depositor. Only if all the deposits were backed 100% by cash at all times (or, what is the equivalent nowadays, by a demand deposit of the bank at the Fed which is redeemable in cash on demand) can the banks fulfill these contractual obligations.

Instead of this sound, noninflationary policy of 100% reserves, all of these banks are both allowed and encouraged by government policy to keep reserves that are only a fraction of their deposits, ranging from 10% for commercial banks to only a couple of percent for the other banking forms. This means that commercial banks inflate the money supply tenfold over their reserves a policy that results in our system of permanent inflation, periodic boom-bust cycles, and bank runs when the public begins to realize the inherent insolvency of the entire banking system.

That is why, unlike any other industry, the continued existence of the banking system rests so heavily on "public confidence," and why the Establishment feels it has to issue statements that it would have to admit privately were bald lies. It is also why economists and financial writers from all parts of the ideological spectrum rushed to say that the FDIC "had to" bail out all the depositors of the Bank of New England, not just those who were "insured" up to $100,000 per deposit account. The FDIC had to perform this bailout, everyone said, because "otherwise the financial system would collapse." That is, everyone would find out that the entire fractional-reserve system is held together by lies and smoke and mirrors, that is, by an Establishment con.

Once the public found out that their money is not in the banks, and that the FDIC has no money either, the banking system would quickly collapse. Indeed, even financial writers are worried since the FDIC has less than 0.7% of deposits they "insure," estimated soon be down to only 0.2% of deposits. Amusingly enough, the "safe" level is held to be 1.5%! The banking system, in short, is a house of cards, the FDIC as well as the banks themselves.

Many free-market advocates wonder: why is it that I am a champion of free markets, privatization, and deregulation everywhere else, but not in the banking system? The answer should now be clear: Banking is not a legitimate industry, providing legitimate service, so long as it continues to be a system of fractional-reserve banking: that is, the fraudulent making of contracts that it is impossible to honor.

Private deposit insurance — the proposal of the "free-banking" advocates — is patently absurd. Private deposit insurance agencies are the first to collapse, since everyone knows they haven't got the money. Besides, the "free bankers" don't answer the question why, if banking is as legitimate as every other industry, it needs this sort of "insurance"? What other industry tries to insure itself?

The only reason the FDIC is still standing while the FSLIC and private insurance companies have collapsed, is because the people believe that, even though it technically doesn't have the money, if push came to shove, the Federal Reserve would simply print the cash and give it to the FDIC. The FDIC in turn would give it to the banks, not even burdening the taxpayer as the government has done in the recent bailouts. After all, isn't the FDIC backed by "full faith and credit" of the federal government, whatever that may mean?

Yes, the FDIC could, in the last analysis, print all the cash and give it to the banks, under cover of some emergency decree or statute. But … there's a hitch. If it does so, this means that all the trillion or so dollars of bank deposits would be turned into cash. The problem, however, is that if the cash is redeposited in the banks, their reserves would increase by that hypothetical trillion, and the banks could then multiply new money immediately by ten-to-twenty trillion, depending upon their reserve requirements. And that, of course, would be unbelievably inflationary, and would hurl us immediately into 1923 German-style hyper-inflation. And that is why no one in the Establishment wants to discuss this ultimate fail-safe solution. It is also why it would be far better to suffer a one-shot deflationary contraction of the fraudulent fractional-reserve banking system, and go back to a sound system of 100% reserves.