Austrian Economics and Interventionism in Japan 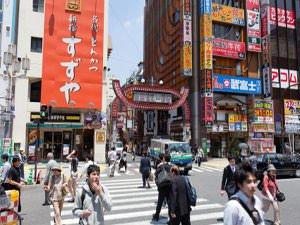 Marc Abela talks with us about the state of Austrian economics and the freedom philosophy in Japan. Abela, a Canadian by birth, has lived in Japan for almost 20 years and has organized the Mises Meeting in recent years, at which Japanese scholars in the Austrian tradition gather to discuss their scholarship. He also organized the recent birthday celebration for Toshio Murata, who introduced Austrian economics to Japan. Abela was one of the founders of the Tokyo Tea Party and continues to be involved with Japanese for Tax Reform and other free-market groups in Japan.

Mises Institute: What is the state of free-market thinking in Japan?

Marc Abela: Professor Hiroyuki Okon, an Austrian School economist here in Japan, once described Japan as a “desert of liberty” and I am forced to admit that is what Japan is today.

Japan suffers the universal results of high taxation and the wide variety of social problems that follow. One of the more recent developments is “tomobataraki,” or the dual income family. No longer is one income enough to make ends meet and so both parents must enter the workforce.

Following in the footsteps of Thatcher, Reagan, and Gorbachev, Prime Minister Yasuhiro Nakasone, in the 1980s, attempted to privatize some heavily nationalized industries, such as Japan Airlines, Japan Railways, Nippon Telegraph and Telephone, Japan Tobacco and Salt Corp. In the early 2000s, Prime Minister Junichiro Koizumi tried, with limited success, to privatize the bloated “National Post Office,” which also behaves like a semi-nationalized “bank” here in Japan. The Western concepts of “liberty” and “freedom,” however, remain unpopular here and the work of both Nakasone and Koizumi are only seen today at best as the acts of drunken doctors who left unnecessary scars on a patient with a common cold.

MI: What effect has the “Lost 20 Years” had in Japan on thinking about the economy?

MA: Japanese people are more and more noticing society is drifting away from sanity, and young people, thanks to the internet and all the new media, are seeking out new ideas. Unfortunately, they have no intellectual and significant sources in which to turn for an honest and reasonable answer in their own language. Also, the simple idea that taxation is at the root of most of the social ills they are now experiencing is viewed as too simplistic an answer for many here to embrace. This is no surprise because children are taught from kindergarten on to memorize and repeat the three supreme tenets of Japan: kyoiku, kinro, and nouzei (education, labor, and taxes).

Japan is celebrating its 2,673th birthday this year. It has a rich history, but one that is dominated by heavenly emperors and autocratic taxing warlords. So the last 20 years with its social and economic woes is more the result of 2,000-plus years of state-managed education and a militaristic mindset, than to just economic mistakes.

Young people today are clearly searching for an answer, but no Japanese source is helping them understand from where the problems stem. And before they are old enough to understand things for themselves, they may wake up already hired and working in some government position.

MI: Although it’s a highly-regulated economy, we are told that Japan enjoys one of the world’s highest standards of living.

MA: The lie is very pervasive today across the globe about how many countries succeed in being “very prosperous together with a very big government and a highly-taxed and regulated economy.” As is the case with Canada and Sweden, Japan has succeeded in achieving a relatively decent economy despite the very invasive and massive burden imposed by the taxing authorities. Taxes are very high at all levels in Japan. The rate is 50 percent for inheritance and death taxes; corporate taxes hit 40 percent very rapidly for almost all businesses; any decent individual income will put you in the 40 percent bracket; and then you have municipal taxes, prefectural taxes, property, vehicle, liquor, tobacco, gasoline, and others taxes. The list is nearly endless. Numerous and cumbersome government regulations prevent new entries to industry and being able to compete with the archaic corporate mammoths known as “zaibatsu” (Mitsubishi, Mitsui, Sumitomo, Yasuda, and a few others) who control and own most of the industries, and make changes at a glacial pace. In fact, since government regulations are so exceedingly high, it can be argued that most businesses and most industries are defacto “nationalized” and behave like state-owned enterprises.

As is the case in many countries, the numbers provided by the government to the public about the economy are false, and figures such as the GDP, the CPI, and the unemployment measurements are all incorrect or fabricated in order to mask the damage and to pretend things are going well when in fact most Japanese in the private sector are working inhuman hours. This results in a lot of very overworked people, record-breaking debts every year, and record numbers of suicides. On the other hand, those working in the public sector are doing much better, and the public sector enjoys fewer work hours, higher pay, and generous holidays.

MI: We’ve recently heard that Mises’s student, Toshio Murata, is still speaking on Austrian economics in Japan. What has his role been in introducing the Austrian School there?

MA: Ludwig von Mises received one single Japanese student while he was teaching in New York in the 1950s and this student, Toshio Murata, has become a shining beacon of courage and a lighthouse of liberty since his return to Japan. Murata-sensei took on the courageous task of translating Human Action into Japanese. In fact, to make the book more accessible to Japanese students and to allow them to communicate easily with foreigners, Murata-sensei ensured that each page of the English version would correspond to the identical page number in the first edition of the Japanese version. In other words, if a Japanese student had a question about something on page 613 of the book, all he had to say was “page 613” and any English speaker would immediately know what the Japanese student was referring to.

Murata-sensei also went on to become the dean of the Yokohama College of Commerce and spent much time promoting the work of Mises and other like-minded intellectuals. But throughout his life he unfortunately faced great resistance (at times directly from his own students) and had to endure much adversity, which obviously limited his reach. Today however (at the age of 90) he still gives yearly lectures where he talks to us about his years with Mises, about his vivid memories of living as a student surrounded by great minds such as Henry Hazlitt and Bettina Greaves, and how it felt to be a Japanese student in the post-WW2 period in New York. Although he had been hand-picked by Mises for a fellowship, some American students back then apparently argued openly against him being granted funds from an “American scholarship” since he was a “Japanese national.”

MI: Although free-market beliefs are not widespread, there does appear to be at least some interest, as we’ve seen new translations coming out of there in recent years.

MA: The Internet revolution and all the new social media, Facebook, YouTube, and Wikipedia, along with the Japanese counterparts, Mixi and 2channel, have allowed for completely new and fresh discussions to be nourished and grow, even if they are anonymous most of the time. As a result of Murata and the Internet, young people in Japan are discovering the work of the Austrian School, largely through the expansive Mises Institute website. Also, thanks in large part to Amazon, an increasing number of Japanese translations are being made available, among them books by Hoppe, Rothbard, Mises, Rockwell, and others.

Marc Abela is the organizer of the Mises Meetings in Japan