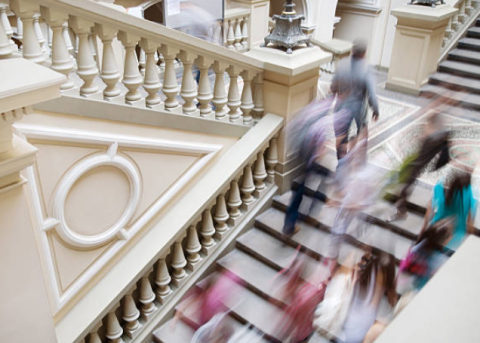 [This article is featured in chapter 79 of Making Economic Sense by Murray Rothbard and originally appeared in the September, 1985 edition of The Free Market]

It was a scene familiar to any nostalgia buff: all-night lines waiting for the banks (first in Ohio, then in Maryland) to open; pompous but mendacious assurances by the bankers that all is well and that the people should go home; a stubborn insistence by depositors to get their money out; and the consequent closing of the banks by government, while at the same time the banks were permitted to stay in existence and collect the debts due them by their borrowers.

In other words, instead of government protecting private property and enforcing voluntary contracts, it deliberately violated the property of the depositors by barring them from retrieving their own money from the banks.

All this was, of course, a replay of the early 1930s: the last era of massive runs on banks. On the surface the weakness was the fact that the failed banks were insured by private or state deposit insurance agencies, whereas the banks that easily withstood the storm were insured by the federal government (FDIC for commercial banks; FSLIC for savings and loan banks).

But why? What is the magic elixir possessed by the federal government that neither private firms nor states can muster? The defenders of the private insurance agencies noted that they were technically in better financial shape than FSLIC or FDIC, since they had greater reserves per deposit dollar insured. How is it that private firms, so far superior to government in all other operations, should be so defective in this one area? Is there something unique about money that requires federal control?

The answer to this puzzle lies in the anguished statements of the savings and loan banks in Ohio and in Maryland, after the first of their number went under because of spectacularly unsound loans. "What a pity," they in effect complained, "that the failure of this one unsound bank should drag the sound banks down with them!"

But in what sense is a bank "sound" when one whisper of doom, one faltering of public confidence, should quickly bring the bank down? In what other industry does a mere rumor or hint of doubt swiftly bring down a mighty and seemingly solid firm? What is there about banking that public confidence should play such a decisive and overwhelmingly important role?

The answer lies in the nature of our banking system, in the fact that both commercial banks and thrift banks (mutual-savings and savings-and-loan) have been systematically engaging in fractional-reserve banking: that is, they have far less cash on hand than there are demand claims to cash outstanding. For commercial banks, the reserve fraction is now about 10 percent; for the thrifts it is far less.

This means that the depositor who thinks he has $10,000 in a bank is misled; in a proportionate sense, there is only, say, $1,000 or less there. And yet, both the checking depositor and the savings depositor think that they can withdraw their money at any time on demand. Obviously, such a system, which is considered fraud when practiced by other businesses, rests on a confidence trick: that is, it can only work so long as the bulk of depositors do not catch on to the scare and try to get their money out. The confidence is essential, and also misguided. That is why once the public catches on, and bank runs begin, they are irresistible and cannot be stopped.

What, then, is the magic potion of the federal government? Why does everyone trust the FDIC and FSLIC even though their reserve ratios are lower than private agencies, and though they too have only a very small fraction of total insured deposits in cash to stem any bank run? The answer is really quite simple: because everyone realizes, and realizes correctly, that only the federal government--and not the states or private firms--can print legal tender dollars. Everyone knows that, in case of a bank run, the U.S. Treasury would simply order the Fed to print enough cash to bail out any depositors who want it. The Fed has the unlimited power to print dollars, and it is this unlimited power to inflate that stands behind the current fractional reserve banking system.

Yes, the FDIC and FSLIC "work," but only because the unlimited monopoly power to print money can "work" to bail out any firm or person on earth. For it was precisely bank runs, as severe as they were that, before 1933, kept the banking system under check, and prevented any substantial amount of inflation.

But now bank runs--at least for the overwhelming majority of banks under federal deposit insurance--are over, and we have  been paying and will continue to pay the horrendous price of saving the banks: chronic and unlimited inflation.

Putting an end to inflation requires not only the abolition of the Fed but also the abolition of the FDIC and FSLIC. At long last, banks would be treated like any firm in any other industry. In short, if they can't meet their contractual obligations they will be required to go under and liquidate. It would be instructive to see how many banks would survive if the massive governmental props were finally taken away.