GET NEWS AND ARTICLES IN YOUR INBOXPrint
A
A
Home | Wire | Why Aren't You Reading Jesús Huerta de Soto?

[Editors note: The new fourth edition of Money, Bank Credit, and Economic Cycles is now available at the Mises Bookstore.]

Jesús Huerta de Soto is probably the most important Austro-libertarian thinker you're not reading, but there's an easy solution. His incredible banking treatise, titled Money, Bank Credit, and Economic Cycles, is free online both in English and the original Spanish.

It's a worthwhile read, if not always an easy one. But real knowledge and wisdom are never easily obtained, and Huerta de Soto here gives us a granular account of everything we need to know about how modern banking works: the history and legal principles; the mechanics of deposit contracts; the role of interest rates; fractional reserve and credit expansion; business cycles and malinvestment; and updated critiques of Keynes, monetarism, and free banking.

As such, it's the most important comprehensive Austrian book on money in many decades and deserves a wide audience.

As does the author himself.​ Huerta de Soto, professor of applied economics at King Juan Carlos University in Madrid and hardworking scion of his family's life insurance business, surely ranks among the great  Austrians working today. His aforementioned work on money and banking represents only a portion of his academic output, which also includes important work on Hayek, legal theory and contract, the role of insurance in the economy (hint: it doesn't increase the money supply), and the history of the Spanish Scholastics. Somehow he manages to combine economist, writer, professor, insurance CEO, and mentor to younger academics into one prolific career. And he studiously — laboriously — updates Money, Bank Credit, and Economic Cycles constantly, already bringing us to the third English edition and multiple Spanish editions. 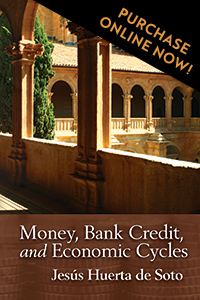 Do yourself a favor and become better acquainted with this man and his work. It will be well worth your time.

Applying a businessman's touch, Huerta de Soto called the 2008 financial and monetary crisis with compelling accuracy in the first (1998, Spanish) edition of his treatise. Writing a decade later, in the teeth of that unfolding crises, Huerta de Soto reminds us of his earlier predictions: everything then happening to Bear Stearns, AIG, Fannie Mae & Freddie Mac, and Lehman Brothers, not to mention Europe's sovereign debt crises, was all entirely predictable, and in fact inevitable. It all lay at the feet of the Federal Reserve Bank, European Central Bank, Bank of England, Bank of Japan, and other profligate bad actors.

Only readers of Professor Huerta de Soto (and of fellow travelers like Dr. Mark Thornton, who called the housing bubble) were braced for the gut punch that was the Crash of 2008.

For this reason alone we should listen to him over the vast majority of monetary economists, who utterly failed even to see the connection between central bank loosening, low interest rates, malinvestment, and bubbles.

We also recommend his sociological treatment titled The Austrian School: Market Order and Entrepreneurial Creativity, published free online by the Institute of Economic Affairs. This is as good a primer on Austrian thought as you'll find anywhere, short, sweet, and succinct at 113 pages.

Huerta de Soto routes us through the key causal-realist principles, always comparing and contrasting those principles with the neoclassical treatment. He anchors acting man, the entrepreneur with finite knowledge and capital, at the forefront of economic analysis — an individual nowhere found in the floating, non-temporal treatment of homogenous capital in macroeconomics. And he gives us superb brief snapshots of Carl Menger, Eugen von Böhm-Bawerk, Ludwig von Mises, and F.A. Hayek, along with summaries of their major contributions. He concludes with a discussion of the Austrian resurgence of the 1970s, led by Murray Rothbard and Israel Kirzner, while parrying some of the chief empiricist criticisms of Austrian theory and method.

But along with contrasts he also gives us blistering critiques of the supposedly dominant neoclassical paradigm, particularly with respect to the relatively static construct of equilibrium:

It is not surprising that present-day economics, dominated by the mathematical formalism of equilibrium theorists of both perspectives, is deemed to be going through a major crisis. This crisis springs mainly from the following causes: first, theorists’ central preoccupation with states of equilibrium, which have nothing to do with reality but are the only states which can be analysed via mathematical methods; second, the total disregard for the role of dynamic market processes and real-world competition, or the study of these from an unfortunate angle; third, the insufficient attention to the role played in the market by subjective information, knowledge and learning processes; and fourth, the indiscriminate use of macroeconomic aggregates and the concomitant neglect of the study of coordination between the plans of the individual agents who participate in the market. All of these factors explain the lack of understanding in economic science today concerning the weightiest problems of real economic life in our time and, thus, they also account for the state of crisis and increasing loss of prestige in which, by and large, we now find our discipline. The above factors all share a common source: the lack of realism in assumptions, and the attempt to apply a methodology characteristic of the natural sciences to the sciences of human action, a field entirely foreign to it. It is precisely the discipline’s current state of crisis which also explains the strong resurgence, beginning in 1974, of the Austrian school of economics, the members of which have been able to present an alternative paradigm which is far more realistic, coherent and fruitful, with a view to rebuilding our science.

This is vintage Huerta de Soto, identifying not only the mainstream failure to recognize the dynamic elements of an economy but also pointing out the deficiencies of mathematical and statistical aggregates to teach us much of anything. We should recall, as Huerta de Soto reminds us, that "mainstream" economists not only failed to get 2008 right, they blew the whole 20th century by failing to predict the collapse of the former Soviet Union. They neither foresaw the collapse of the USSR's planned economy nor understood the fundamental, inherent problems in the world's dominant anti-market economic system of the last hundred years. The impossibility of socialism, both in terms of market information and property rights, was entirely dismissed by the Keynesian establishment.

But Mises and Hayek were right; Marx and Keynes were wrong. Jesús Huerta de Soto is a worthy heir to the former and a capable slayer of the latter, or at least their acolytes still plaguing us with their demand-side fetishes.