GET NEWS AND ARTICLES IN YOUR INBOXPrint
A
A
Home | Mises Library | Money, Bank Credit, and Economic Cycles 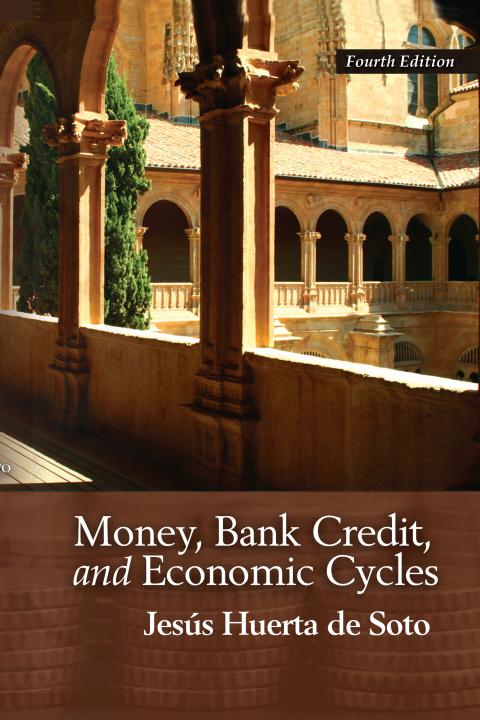 This book is a masterpiece that utterly demolishes the case for fiat currency and central banking, and shows that these institutions have compromised economic stability and freedom, and, moreover, are intolerable in a free society.

From the "Preface to the Fourth English Edition"

Since the appearance of the third edition seven years ago, economic events have unfolded entirely in line with the analysis contained in this book.

This new edition has been thoroughly revised and includes, among other minor modifications and additions, references to the most relevant literature published on the subject since the previous English edition appeared in 2012. In this respect, we should note the growing number of economists, even in the "neoclassical mainstream," who are ultimately recognizing the full theoretical validity of the Austrian approach as an explanatary paradigm for the economic and financial crisis which began to grip the world in 2008 and the consequences of which are still far from being definitely overcome.

It gives me great pleasure to note that the Austrian analysis is awakening greater interest worldwide. The book's success is due...to the undeniable fact that the noble Austrian approach has managed to answer the theoretical, historical, and ethical conundrums we face.

Can the market fully manage the money and banking sector?

Jesús Huerta de Soto, professor of economics at the Universidad Rey Juan Carlos, Madrid, has made history with this mammoth and exciting treatise. He integrates sweeping history and rigorous theory to make the good-as-gold case that the institutions of money and banking can be part of the free market — without a central bank, without bailouts, without inflation, without business cycles, and without the economic instability that has characterized the age of government control.

Such a book as this comes along only once every several generations: a complete comprehensive treatise on economic theory. It is sweeping, revolutionary, and devastating — not only the most extended elucidation of Austrian business cycle theory to ever appear in print but also a decisive vindication of the Misesian-Rothbardian perspective on money, banking, and the law.

Jörg Guido Hülsmann has said that this is the most significant work on money and banking to appear since 1912, when Mises's own book was published and changed the way all economists thought about the subject.

Those are the main points but, in fact, this only scratches the surface. Indeed, it would be difficult to overestimate the importance of this book. Huerta de Soto provides also a defense of the Austrian perspective on business cycles against every other theory, defends the 100% reserve perspective from the point of view of Roman and British law, takes on the most important objections to full reserve theory, and presents a full policy program for radical reform.

Huerta de Soto has set new scholarly standards with this detailed discussion of monetary reform from an Austro-libertarian point of view. Huerta de Soto’s solid elaboration of his arguments along these lines makes his treatise a model illustration of the Austrian approach to the study of the relationship between law and economics.

Peter Seewald has published an extensive biography of Pope Emeritus Benedict XVI, which will be of special interest...

The State: The Deadliest Virus

The deadliest virus consists of the deification of human reason and the systematic use of coercion, which the state...