New York Fed President Dudley recently commented that “real consumer spending growth appears to have moderated somewhat from the relatively robust pace of the second half of 2015.” While this may suggest headwinds from cyclical economic conditions, there are emerging signs that ultra-accommodative policy also acts as a constraint on consumer spending via income effects. Instead of inducing savers to spend and borrow, rapid asset price appreciation as a result of monetary easing have outpaced wage growth, and pass-through services inflation subsequently reduced discretionary income and forced already-levered consumers to save instead of spend. This unintended consequence worked against accommodative policy’s desired substitution effects and suggests further easing would likely yield diminishing results if asset price appreciation continues to outpace real income growth. 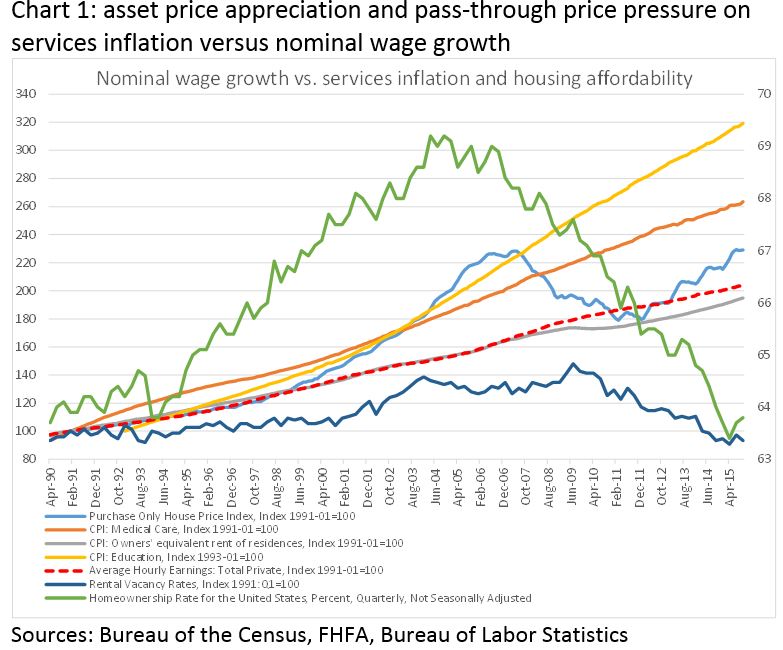 In response with rising commercial real estate prices (Chart 2), businesses also pass on higher operating costs in the form of services inflation. Year-over-year personal consumption expenditure — services (chain-type price index) has been well-anchored in the 2% range (2.13% in Feb 2016) since 4Q 2011. 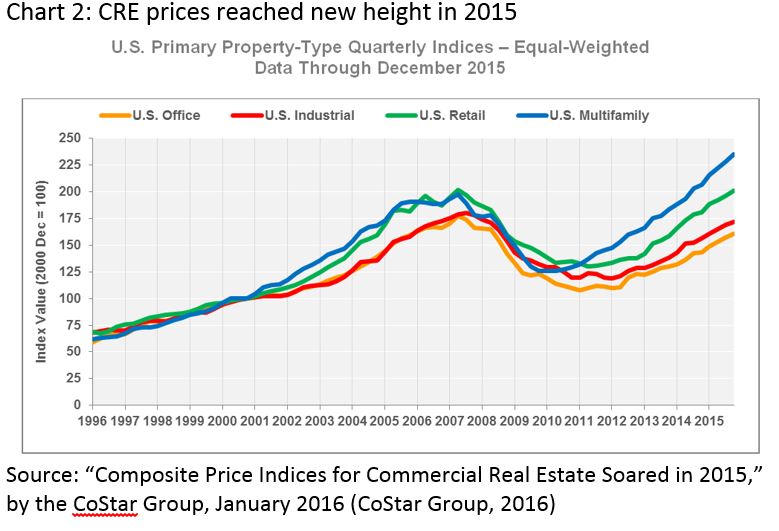 Another factor constraining consumer spending is the well-publicized effect of student debt burden. This supports a view that household spending may be at a lower potential than during prior cycles, thus magnifying the costs of higher services inflation as a result of asset price appreciation.

Accommodative monetary policy encourages consumers to spend and borrow rather than hoarding cash. However, cash-strapped consumers already facing the pressure of debt burden would likely do neither.

Federal Reserve’s recent Report on the Economic Well-Being of U.S. Households highlighted signs that some consumers are already stretching their spending power to meet existing obligations. 47% of respondents reported that a $400 emergency expense would be “more challenging to handle” (unable to use cash or a credit card that they pay off at the end of the mouth). Results from middle-income household with $40,000 to $100,000 annual income were similarly downbeat, where 44% of respondents indicated difficulties (Chart 3).

Chart 3: Percent of respondents who would completely pay an emergency expense that costs $400 using cash or a credit card that they pay off at the end of the month (by race/ethnicity and household income)

Chart 4: During the past 12 months, was there a time when you needed any of the following, but didn’t get it because you couldn’t afford it?

A survey on health-care expenses was also discouraging. 31% of respondents reported going without some type of medical care in the preceding 12 months due to inability to afford the cost. 45% of those surveyed under a household income of $40,000 reported similar decisions to defer treatment.

In the section “spending relative to income,” Fed researchers reported that one-in-five respondents with spending exceeded their income (leveraged spending). These are signs that consumers were taking advantage of lower rates, but the spending does not appear to be sustainable without corresponding rise in real wage growth.

Another factor constraining discretionary spending is rising renter cost burden. The Harvard Joint Center for Housing Studies projected a “fairly bleak picture of severe renter burden across the U.S. for the coming decade.” The report acknowledged falling incomes among renters and the persisting gap between renter income and renter housing costs (Chart 6), as well as severely burdened renter households (housing costs of more than 50% of household income) reaching 11.8 million in 2015 (Chart 7), or about one in four renters.

Chart 5: In the past 12 months, would you say that your household’s total spending was more, less, or the same as your income? (by household income) 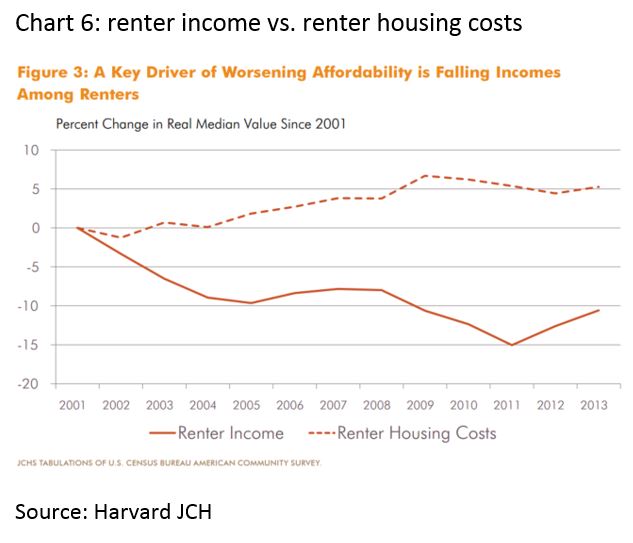 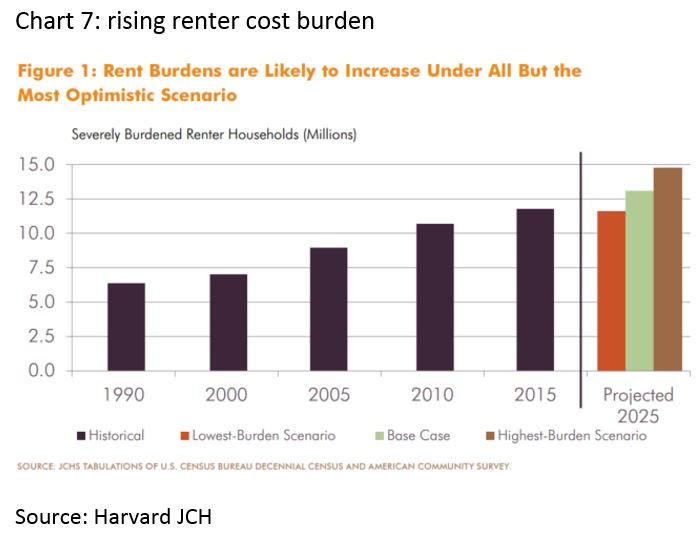 Financial market participants play an essential role in the transmission of Federal Reserve’s monetary policy by affecting financial conditions — the following components are part of the GS Financial Conditions Index:

The Federal Reserve only has effective control of the very front-end of the Treasury curve via conventional monetary policy. Nevertheless, unconventional policies such as QE, as well as forward guidance on SOMA principal reinvestments also allow the central bank to affect longer-term funding costs via the expectations and “recruitment channel.” Under this mechanism, asset prices take little time to react to changing policy stances, while impacts on income growth and economic conditions would often take longer to manifest.

Such lag between asset price appreciation and changing economic conditions carries a hidden cost — if asset price inflation becomes well entrenched ahead of broad-based economic growth, those without assets would be penalized just to maintain their life-style, and the reduction in their discretionary spending would serve as a disinflationary drag to Federal Reserve’s effort to reflate the economy.

Inefficiencies within the monetary policy transmission mechanism have resulted in income effects becoming greater than the substitution effects. Under this scenario, ultra-accommodative policy may induce further saving by asset-less consumers to further weigh on aggregate demand. Additionally, policymakers should exercise caution if increasingly aggressive and unconventional reflationary policies do not yield intended results.

Victor Xing is founder and investment analyst at Kekselias, Inc. and formerly a fixed-income trading analyst for the Capital Group Companies.

Victor Xing is founder and investment analyst at Kekselias, Inc. and formerly a fixed-income trading...