GET NEWS AND ARTICLES IN YOUR INBOXPrint
A
A
Home | Wire | True Money Supply: August Money Supply Growth Remains Way Down from 2012 Levels

The "true money supply" measure is a measure of the money supply pioneered by Murray Rothbard and Joseph Salerno and is designed to provide a better measure than M2. The Mises Institute now offers monthly updates on the TMS metric and its growth. See here for July's update. During August 2015 (the most recent data available), the TMS increased 8.5 percent over the TMS during August 2014. August's growth rate was the highest rate of growth in three months and the second-highest rate of growth since August 2013. Only May 2015 showed a higher rate of growth over the past two years. The first graph shows the growth rate for the TMS since 2001: 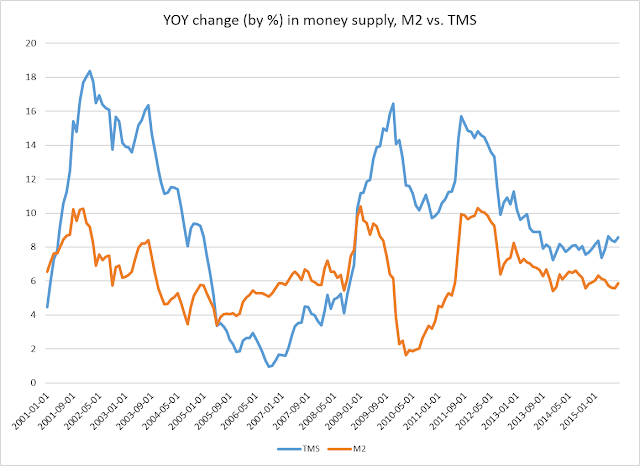 We see that the growth rates in recent months have stabilized after a period of significant decline. During 2014, several commentators noted the decline in TMS growth and suggested that economic slowing may be on the horizon, as economic downturns often correspond to declines in TMS growth. Since 2014, however, TMS growth has stabilized, and this suggests that an obvious economic bust is still not likely in the short term.

Since 2009, the TMS has been growing faster than M2, and during August M2 grew 5.8 percent (a five-month high) compared to 8.5 percent for TMS. Both M2 and TMS growth rates have been flat since early 2014.

If we look more closely at the components of the TMS and M2 we can guess some reasons for this divergence.

One of the reasons that M2 growth is being held down, for example, is because M2 includes small time deposits while TMS excludes it. Small time deposits in August declined YOY by 16.4 percent, which was the largest drop since July of 2013: 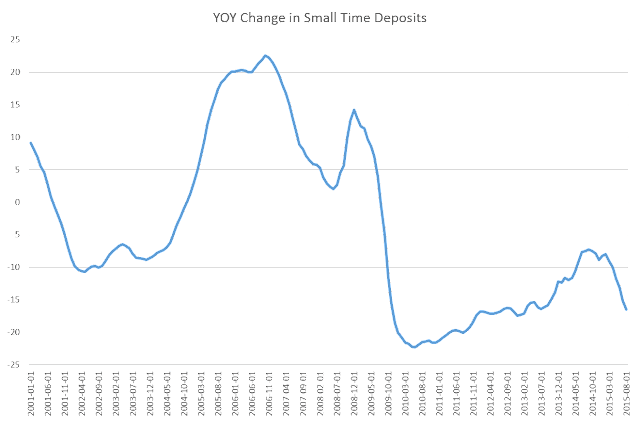 The overall effect of including small time deposits in M2 right now is that it brings down the growth rate in M2.

Another difference between TMS and M2 is that Treasury deposits with the Fed are included in TMS but not in M2. Treasury deposits increased 165 percent during August 2015, which was the second-largest YOY increase since the aftermath of the financial crisis in 2009.  Overall, in recent months, Treasury deposit growth is at the highest we've seen in years: 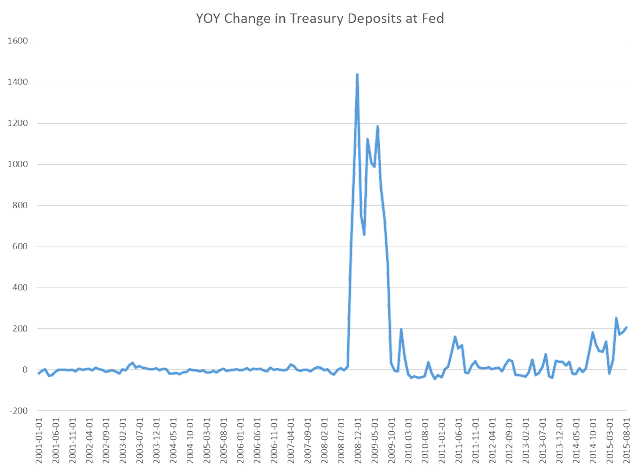 So, in part, TMS is growing more quickly than M2 because TMS excludes the shrinking supply of small time deposits while including the soaring growth in Treasury deposits.

If we look at the money supply measures themselves (as opposed to YOY growth rates) we can see that M2 has only grown 1 percent over the past six months. TMS has grown by more than twice as much, however, (2.6 percent) during the same period: 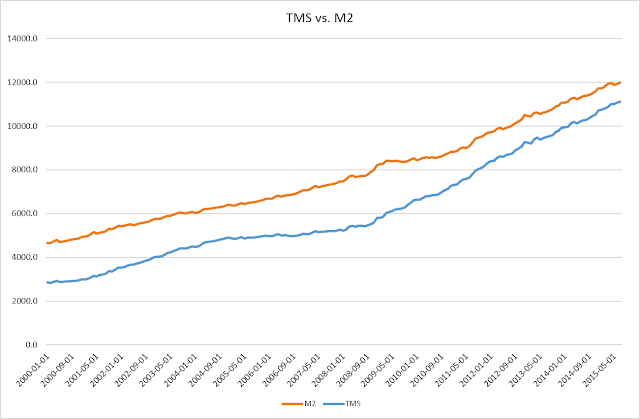 One might interpret the trends in deposits as showing unease with the economy: the private sector appears to be thinking that it needs ready-to-spend cash handy while the Treasury is increasing deposits, perhaps in anticipation of a need for more fiscal "stimulus" (as happened from 2008-2009).

As we can guess from the Fed's refusal to raise the target rate, the comfort level with the current state of the economy is not exactly robust.

Also worrisome for the Fed is surely that fact that two years after the TMS and M2 began to really slow, CPI growth fell to approximately zero. (One could make a case that the CPI growth follows TMS with a lag time of perhaps 2-3 years.) There is no doubt that there is significant price inflation in many types of assets — including real estate — right now, but other prices are dropping fast due to weak demand, and this includes oil which has recently experienced some of the biggest year-over-year declines seen in more than 25 years.