GET NEWS AND ARTICLES IN YOUR INBOXPrint
A
A
Home | Wire | Ruled by DC: Get the Feds Out of Western Lands

Ruled by DC: Get the Feds Out of Western Lands

In the final days of his administration, President Obama has decided that with the stroke of pen, he shall further consolidate direct federal control over lands within Western states. Specifically, Obama created the Bear Ears National Monument and the Gold Butte National Monument in Utah and Nevada, respectively. The Obama Administration claims that Obama's unilateral edict was necessary because Congress had not passed any legislation on the matter.

Indeed, the Obama-appointed Interior Secretary stated that "protecting the area using legislation would have been preferable" but that in the absence of legislation, it was necessary to simply declare the lands to be National Monuments.

In other words, the democratic, constitutional process of Congressional lawmaking was inconvenient for the President. So, he decided to rule by proclamation instead, giving the Governor of Utah barely an hour's notice before the proclamation was made public.

It's Not About Conservation — It's About Federal Control

Now, we should first note that the overwhelming majority of lands newly designated as National Monument lands were already federal lands to begin with, and have been controlled largely by the US Bureau of Land Management and the Forest Service.

Moreover, it is not the case that opponents to the new designation are mostly people who want to privatize the land or make it easier to mine or develop the land. In fact, many opponents of the designation oppose it because they fear Monument status will lead to greater development of the area as a tourist mecca.

In other cases, members of Indian tribes object to making sacred lands part of a federally-controlled National Monument area.

And, of course, throughout Western states, public lands continue to be a lucrative source of tourist dollars and eco-tourism. The old caricature of pro-conservationist leftists and strip-mining conservatives has long been just that: a caricature.

The reality is that nowadays many private firms and local governments depend on public lands for their livelihood and revenue, and these groups have quite a bit of influence at the state legislatures in question. Preserving natural spaces from development can mean big business and Western-state politicians know it:

It is not at all clear that markets or local governments would prefer that land be used for agricultural purposes as opposed to other purposes. For example, were Rocky Mountain National Park to become a locally-controlled park or state park, there is, realistically speaking, zero chance that it would be handed over to ranchers or miners. The park is far too valuable to the local economy as part of the recreation and tourism industries. To turn the park into range land would devastate the economies of the local communities, many of which contain wealthy and influential voters.

But, say that the park were broken up into parcels and sold to a number of private owners. (We're in the realm of pure fantasy at this point.) It would make little sense to use the land for mining or ranching even in this case. Given the infrastructure in place and the relative closeness to a major metropolitan area, the lands in and around the Park are likely far more lucrative for recreational purposes than for mining or ranching.

There is little doubt, however, that much of the controversy over the site will be framed like this: on one side are the conscientious environmentalists and others who want to preserve these pristine lands from destruction. On the other side are oil executives who want to strip-mine the land.

The real debate here, however, isn't over strip mining vs. conservation. It's about whether or not a president thousands of miles away can — with the stroke of a pen — dictate how millions of acres in a faraway state can be used, and do so over the protestations of the state legislature.

Nor can it be demonstrated that federal agencies are better custodians of lands than are states. Indeed, the federal government has routinely been more inclined to allow overgrazing on federal lands while subsidizing ranchers at taxpayer expense. It is the states that have demonstrated more prudent stewardship of resources.

Moreover, The Denver post in a 2014 editorial noted other cases in which the federal government hapless mismanaged fish and wildlife issues:

One has only to look at the great elk management debacle in Rocky Mountain National Park. When populations grew out of control in the park, federal decision-makers chose to pay significant sums to bring in contract killers to thin the herd. A proposal by Colorado wildlife managers to use well-trained hunters and donate the meat to struggling families was cast aside.

We could further examine the sad case of game fish being electrocuted and buried on the Yampa River in northwest Colorado at the insistence of the U.S. Fish and Wildlife Service to preserve the pikeminnow, while the same pikeminnows are slaughtered and dumped in Washington state to preserve the wild salmon. All of this, in a never-ending nightmare of bureaucratic red tape with no firmly stated goals or objective in sight, by design.

Perhaps the most memorable recent example of this occurred in 2013 when the federal government shut down national parks and other federal lands as part of the usual "government shutdown" ploy. The federal government dispatched federal agents armed with assault rifles who forcibly ejected visitors from the allegedly “public lands.” Meanwhile, nearby towns that rely on tourists for the local economy were powerless to open the parks themselves. State officials, who are far more sensitive to local economic needs than members of Congress or the White House, were also powerless to do anything.

These are just some of the reasons why Utahns of various interests have opposed greater federal power over lands in their states.

Federal Lands Are the Problem

This Obama Administration's move with Bear Ears is the latest "screw-you" to Utah in an ongoing effort by the State of Utah to exercise more control over federal lands. For years now, the Utah legislature and the state's delegation in Congress have been exploring ways to limit federal control over lands within the borders of Utah.

RELATED: Can the States Seize Control of Federal Lands?

What is steadfastly ignored in the debate however, is the questionable legitimacy of federal control over so many immense swaths of land.

Today, the feds control 640 million acres (not counting the far larger federally-owned areas of coastal sea floor). And in most Western states, the Federal government owns more than a third of all the land. In the case of Utah and Nevada, where the two new monuments are created, the federal government owns 65 percent and 85 percent of all land, respectively. 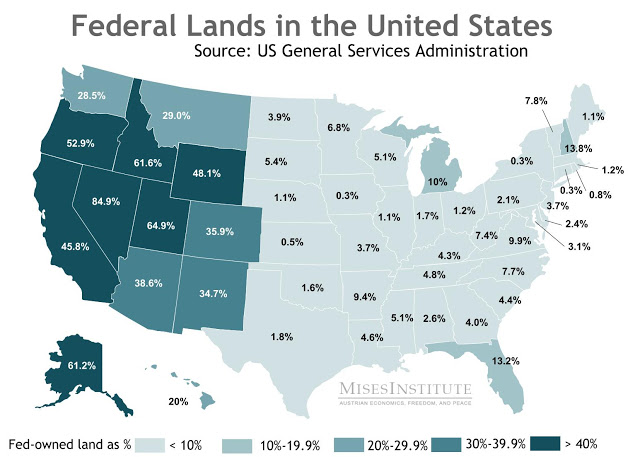 This means that these lands are ultimately controlled by politicians thousands of miles away who are not citizens of those states. In the case of Utah, for example, federal lands are controlled by executive-branch bureaucrats — few of whom are from Utah — or they are controlled by Congressional laws passed by a Congress composed of 529 non-Utahns and 6 Utahns.

The fact that lands in Utah should be largely controlled by Californians, Texans, and New Yorkers — many of whom have never even set foot in Utah — should strike reasonable people as both objectionable and bizarre.

At the same time, if those lands are truly sacred sites, as some groups contend, then those sites should be Tribal lands and neither federal or state lands. (See "Why Indian-Tribe Sovereignty Is Important.")

Other observers of the Obama Administration's many executive orders on federal lands have called for the abolition of the Antiquities Act of 1906 which empowers the president to designate federal lands as National Monuments. The Act allows presidents to act unilaterally without any consent from Congress as to how these lands might be designated. Moreover, as critics of the Act note, the Act was supposed to protect small areas of archeological or geographical interest. But, the Act has been abused in order to make many thousands of acres into areas similar to National Parks.

Repealing the acts would be a step in the right direction, but it fails to tackle the larger problem of federal lands. After all, if federal lands were not so expansive to begin with, the Antiquities Act would be far more limited in its scope. And, even if Congress were the body designating Monument status, that would only be a tiny improvement. It's true that giving a single person in the Oval office the ability to control lands in faraway states is a problem. However, giving that same control to 535 people in a building down the street form the Oval Office isn't exactly a significant improvement.