GET NEWS AND ARTICLES IN YOUR INBOXPrint
A
A
Home | Wire | Paul Krugman’s Latest Conspiracy: Trump Is A Gold Bug

Paul Krugman’s decay from Nobel Prize winning economist to partisan hack has only escalated since taking control of his Twitter account (it was previously used to simply link to his New York Times columns.) Some notable 2016 lowlights include Krugman accusing the FBI of working with Russia, one of the more impressive election night meltdowns, and his suggestion last week that Trump losing the popular vote gives him extra incentive to have his own 9/11.

This morning however, Krugman took to the President-elect’s favorite medium to make the case that Donald Trump was actually a secret “gold bug.”

As I noted last week, Trump himself has taken a number of various position on money, the Fed, and gold (giving the gold standard a literal thumbs up last year during an interview with GQ), so it was interesting to see Krugman’s case. Did he manage to confirm the fears of Tim Duoy at Bloomberg, that Trump may put Austrians in the Fed? 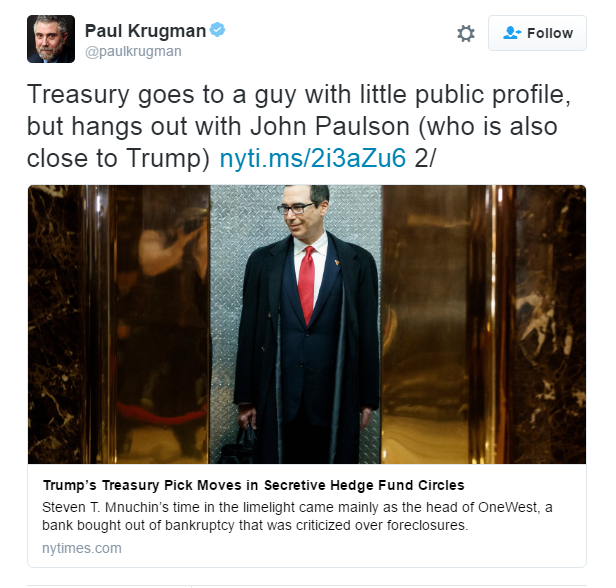 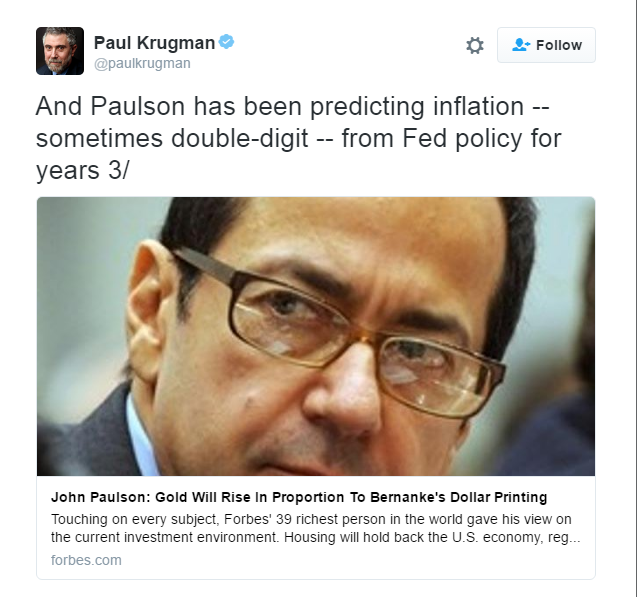 Of course Mnuchin is also friends (and former business partners) with George Soros, so the logic is a bit weak. Further, John Paulson’s notoriety stems less from owning gold and more from making billions of dollars correctly shorting the housing market the Fed inflated - as Krugman advocated.  (For any fans of The Big Short, Paulson is one of the big players left out.)

While it’s true that Paulson had some of the same inflationary concerns that many Austrians had, he also saw Bernanke’s quantitative easing having some value. So instead of being some ideologically driven investor or passionate “gold bug” – Paulson was simply making a move to protect himself against what he viewed as a threat from inflation. In fact, Paulson has decreased his exposure to gold over the years. So while it’s good that Trump and Mnuchin have a personal relationship with a man who seems to read some of the same signs Austrians do, Krugman’s analysis has more to do with petty insults than anything substantive.

Krugman then set his sights on Rep. Mick Mulvaney, who Trump announced as his choice for Director of the Office of Budget and Management.

Mulvaney’s selection was widely praised by libertarians due to a record of being a rare Republican who was willing to take on defense spending. As a member of the House Financial Services Committee, Mulaveny has shown to be a Fed critic. On multiple occasions he has criticized Janet Yellen for speaking on matters outside of monetary policy and what business the Fed has in regulating commodities. Mulvaney is also a co-sponsor of the FORM Act, an ambitious if flawed attempt at Fed reform championed by Rep. Jeb Hensarling that would limit the discretion of the Fed by forcing it to adopt a monetary policy rule.

In spite of Mulvaney’s apparent embrace of rules-based monetary policy, he has embraced some issues which are praise worthy. He has been one of the most supportive Congressmen in DC on Bitcoin, praising it as a currency “not manipulated by government.”  Last year, Mulvaney submitted questions to Yellen pressing her on what regulations the Fed may place on cryptocurrencies, as well as when the last time the Fed audited its gold holdings.

Of course instead of highlighting the pro’s and con’s of having a Fed critic at the position of Budget Director, Krugman instead opted to ridicule Mulvaney for speaking at an event hosted by the John Birch Society.

It is not a surprise that Krugman found Larry Kudlow to be the “most reasonable” “gold bug” around Trump. After all, Kudlow has supported increasing the money supply to combat deflation, was a fan of Obama’s disastrous “cash for clunkers,” and in general has fairly conventional views on the Fed.

Though it’s not a shock to see Krugman’s Twitter tirade consist mainly of insults masquerading as analysis, it is surprising the Krugman forget to mention Trump’s flirtation was another gold standard advocate – former BB&T chief John Allison who discussed the Treasury role at Trump Tower. In fact, for Austrians looking for any reasons for optimism, there are few better than the fact Allison name continues to be connected with the administration – possibly at the Fed.

Meanwhile, it is promising to see Trump surrounded by at least some people who seem to view the Fed as something less than a heroic force for good. Whether this leads to the new president fulfilling his promise to “drain the swamp” is yet to be seen. But as we wait to see what 2017 has in store for us, at least we can enjoy watching Krugman continue to destroy his reputation 140 characters at a time.

Who Owns Federal Reserve Losses and How Will They Impact Monetary Policy?

Ryan McMaken and Tho Bishop discuss how the state uses holidays as a culture war weapon.

Ryan McMaken and Tho Bishop talk about the increasing decay of federal legitimacy.