The Origins of the Crack-Baby Myth

In a 1991 interview with Randy Paige about why drugs should be legalized, Milton Friedman said that the “main thing that bothers me about crack is not [that it’s addictive], it’s the crack babies, because that’s the real tragedy.”

Paige responded by saying, “as you know, we are already experiencing epidemic proportions of that. One out of every four babies going into one hospital, I can tell you, in Maryland is addicted.”

Ever since the mid-1980s, this perception of “crack babies” was accepted nearly without question throughout the country. If a mother smoked crack while pregnant, the child would be born addicted to crack and suffering from withdrawals, would be underweight, and would likely “have an IQ of perhaps 50.”

Furthermore, as Randy Paige said, crack babies were an epidemic. They were everywhere. It was a major, nation-wide problem. Even today, the notion that babies are born underweight and addicted to crack from the mother’s personal use while pregnant persists with hardly a critical thought.

The problem is, the “crack baby” is a complete myth.

The Origins of the Idea

For most of the twentieth century, cocaine was a relatively uncommon recreational drug. The major drugs were marijuana and heroin. In the 70s, it was seen as a drug used almost exclusively by wealthy white people, and the practice of “freebasing” – a way to smoke cocaine by cooking it with ether in a highly flammable process – had a quick rise and fall in popularity. In the 1980s, cocaine started getting more attention as the quantity of Colombian cocaine being imported into the country was driving down the price, and cocaine use was beginning to be associated with more than just upper-class parties and Wall Street yuppies.

In 1985, Newsweek ran a cover story entitled “Cocaine: The Evil Empire.” This story brought the cocaine trade into the national spotlight. Not long after, the media was looking for ways to capitalize on the fears being generated against the new menace. 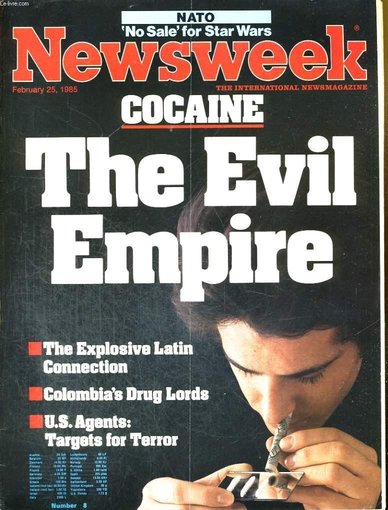 The media jumped on the only study that, at the time, been published on prenatal cocaine exposure, which was conducted by Dr. Ira Chasnoff and published in the New England Journal of Medicine. In Dr. Chasnoff’s study, there seemed to be a possible link between cocaine and the “depression of interactive behavior” in newborns. The study only had a sample size of twenty-three women, and – even as Chasnoff himself admitted – it was far from perfect. In addition to the inadequate sample-size, a great many variables were not accounted for, such as the use of other substances.

On September 11, 1985, the CBS Evening News reported on Chasnoff’s study. Susan Spencer, the reporter who picked up the story, had an image filmed of a baby shaking, which she explained was a symptom of cocaine withdrawals due to the mother using cocaine while pregnant. These types of stories started spreading around the country, and the idea of the “cocaine baby” was born.

Only two months after CBS created the image of the “cocaine baby,” the New York Times ran their first story about crack cocaine. A substance that still was yet to be widely known throughout the country, crack was cheaper and more potent than traditional cocaine, which meant that it was perfect for the kind of “yellow journalism” that has helped craft the drug war narrative for the past century. CBS decided to repackage their original “cocaine baby” story. Now, they were “crack babies.”

By 1987, both crack and crack babies were familiar concepts for every person in America. According to another Newsweek cover story entitled “The Plague Among Us,” crack cocaine was “an epidemic” that was “as pervasive and dangerous in its way as the plagues of medieval times.” And nearly every baby born underweight, unhealthy, or suffering from any kind of tremors was a “crack baby,” regardless of what substances the mother may use. With this kind of loose definition, it’s no wonder that Paige was reporting that 1-in-4 babies born was a crack baby.

Ignoring the Science to Craft a Narrative

At the Emory University Medical School, a psychologist named Claire Coles had been studying the effects of prenatal exposure to drugs on infants for several years (in fact, Dr. Coles is still conducting such research at Emory today). At the time, she had only looked at alcohol, cigarettes, and marijuana. She did not study the effects of heroin exposure, but this was only because she believed that infant heroin addiction from prenatal exposure was well settled, and she never felt a need to question the plausibility of a heroin-addicted infant.

But after the “crack baby” stories started sweeping the nation, she thought it seemed fishy. Cocaine is not addictive the way heroin is, she knew. Addicts don’t suffer from withdrawals because there is no chemical dependency established in cocaine use. Cocaine “addiction” is really just the product of psychological “reinforcement,” meaning that when you use it, it makes you want to continue to use more, but ceasing use of it does not cause withdrawals the way heroin does because withdrawals are the product of an actual chemical dependency. Furthermore, because cocaine was a stimulant, she reasoned, if there were withdrawal symptoms at all, it should manifest in a baby being abnormally sleepy. The jittery babies plastered all over the news were – if anything – heroin babies.

Coles had read Chasnoff’s study and originally thought little of it, but now she decided to read it again, and she noticed that some very important variables were not controlled for. The mothers in the study were undernourished. They had poor prenatal care. They were living in violent or abusive environments. More importantly to Coles’ own research, these mothers drank alcohol and smoked both tobacco and marijuana during their pregnancies. On what grounds could any legitimate conclusion be drawn linking the health problems of their babies to, specifically, cocaine?

Cole started incorporating cocaine into her own research. Not only is there nothing to suggest that babies inherit any kind of addiction to crack from their mother’s use, but she was unable to identify any link between cocaine or crack and a baby’s cognitive or physical health. “When you have a myth,” Cole said about the crack baby narrative, “it tends to linger for a long time.”

In a 1992 article, James Bennet and Thomas DiLorenzo published an article demonstrating that when other factors are accounted for, no statistical link between crack use and birth conditions remains. In fact, “the hysteria” about the crack babies, they note, “may convince many mothers that their children are indeed hopeless . . . [so] why bother with prenatal care?”1

When reporters would call Cole for her expert opinion on the crack baby epidemic, she would explain to them the problems with the myth. The reporters eventually stopped contacting her. Instead, they ran interviews with hospital employees, many of whom were not even part of the medical staff. The crack baby myth continued to grow, and the science contesting it was ignored.

As the Fed Powell Continues to Flail, Could an MMT Fed Chair Be Next?

Forced Vaccinations in France Bring Both Repression and Protest

Macron says vaccines are not compulsory for the general public for now, but they are essentially required for anyone who wants to live a normal life.

Salazar: The Dictator Who Refused to Die

"I doubt whether there is today in any democracy … personal liberty as well secured as it was then in Portugal.”

Getting to Galt's Gulch: Everyday Secession

For the libertarian, the way forward is not joining in left-right political boxing matches, but secession. The success of libertarianism is independence from the state’s influence.

Canada's "private" long-term care homes are anything but private. But the fact a small sliver of the marketplace is allowed to charge fees for services means activists want even more socialized medicine.