Imagine creating a graduate school in economics today, from scratch. What would it look like?

For starters, it would be online, inexpensive, fast, flexible, and taught using the great treatises. It would stress economic history. It would be rigorous. It would focus on fundamentals. And critically, it would teach real economics from an Austrian perspective. In other words, nothing like traditional brick-and-mortar programs and their dreadful textbooks!

The Mises Institute has created just this kind of program, and we’re excited to tell you about it. Will you consider supporting this new graduate degree program—a master of arts in Austrian economics—which will launch this month? You can learn everything about it at mises.org/edu and donate online.

Ludwig von Mises always hoped to create a truly Austrian graduate school of economics in the US. He hoped to build a “Liberal Institute” at the University of Chicago. He hoped that pro-capitalist think tanks might help him create a graduate program. He hoped his private seminar at NYU might plant the seeds for a full-fledged academic program at Grove City College or another American university. But his dream was never fulfilled. The “nurseries of socialism” multiplying in economics departments across the country went largely unchallenged.

Murray Rothbard, Margit von Mises, and Lew Rockwell had the same vision for the Mises Institute. The Institute has always been a haven for liberal and Austrian scholarship, an educational oasis in the desert of academia. Now we are taking the opportunity to make Mises’s vision a reality. We have built a true degree-granting graduate program based in Austrian and Misesian economics. We are challenging the statist universities and providing an alternative—with your help. Please visit mises.org/misesedu to donate today.

Here’s the big problem: economics as a profession is in bad shape. Economists don’t know their own history or foundational texts. They don’t help us understand the world better; they don’t make us wealthier or happier; and they don’t accurately predict anything despite all their models and statistics. They certainly have no time for treatises or economic theory—they’re too busy canceling each other for posting insufficiently “woke” thoughts on Twitter!

In fact, most economists just want comfortable sinecures. Their “job” is to provide a veneer of intellectual cover for state action.

One professor at SUNY Stony Brook, for example, promotes a form of alchemy dubbed “modern monetary theory.” In her telling, sovereign governments can create endless currency and endless prosperity with the printing press. Debt doesn’t matter. Capital accumulation and productivity don’t drive the economy, consumption does. And consumption requires money, so…

In a saner world, she’d be dismissed. In 2020 America, her colleagues and politicians praise her vision of a world without scarcity, where government conjures up goods and services in a command economy. Of course her idea isn’t modern—kings have used seigniorage and currency debasement for centuries. And it’s not monetary, but fiscal—Congress and the Treasury create the new money. And it’s not a theory, but rather accounting gimmickry—government debt is infinite, because “we owe it to ourselves.”

So you see the problem. We desperately need our own schools and institutions to counter the ruinous academic orthodoxy.

We  accept only the best and brightest students, so we set the price to attract quality applicants while still giving them “skin in the game.” And we have the best professors, names like Dr. Joseph Salerno, Dr. Peter Klein, Dr. Robert Murphy, Dr. Carmen Dorobăț, Dr. Jeffrey Herbener, and Dr. Sandra Klein. They hold PhDs from prestigious universities including NYU, UCLA, Columbia University, Cal-Berkeley, Rutgers University, and Virginia Tech. All are accomplished scholars who have lectured or taught at Mises Institute events, published in our journals and online publications, and released books under our imprint. Many were personal friends or protégés of Murray Rothbard.

As you can see, this is a top-notch program across the board, and this necessarily means that each student will be partially subsidized by donors like you. Think of your contribution as a scholarship, an opportunity to launch a worthy student into the world of business, academia, finance, or entrepreneurship.

Here’s a glimpse of what our graduate students will learn while obtaining their master of arts degree:

If you want to know more about the program, please visit mises.org/edu. But please take a moment today to support this graduate school by donating online at mises.org/misesedu.

The Austrian school has always dedicated itself to teaching as well as to academic scholarship. Our faculty is made up of great teachers, men and women who care about mentoring students. Unlike their peers at most universities, they don’t disdain the craft and profession of actual teaching, and they live for validation  from a small group of academics. They see economics as a vital, living discipline, a social science committed to deductive reasoning and a greater understanding of human action. Because of this, our graduate degree program is unlike any economics program in existence. Our focus is on the students themselves and whether they demonstrate a graduate-level understanding of economic theory. Our goal is to graduate students who understand economics as a science of human action—of choice, scarcity, and axiomatic truths—rather than an empirical exercise that tries to fit volitional individuals into empirical models or equations.

This year has been like no other in recent memory for America. Economic ignorance on the part of policymakers, the public, and even professional economists has never been greater. Intellectual error is compounded by outright anti-intellectualism and capitulation to mobs. It feels like civilization itself is under attack. That’s why we created this graduate degree program: to build a bulwark against the rising tide of bad economics, contempt for the rule of law, attacks on capital, and hostility to private property.

For nearly forty years, the Mises Institute has taught thousands of students from all walks of life about the Austrian school. We have held hundreds of conferences, seminars, retreats, and summer universities. Mises.org, one of the highest-traffic economics sites in the world, contains a lifetime’s worth of learning in the form of free books, articles, speeches, videos, and journals. This master of arts degree in Austrian economics represents the next evolution of the Institute, into a real alternative graduate school. It comes at a time when America and the West desperately need to learn the foundations of economics, real liberalism, law, property, and peace. We either teach and persuade, or we succumb to politics, interventionism, and war.

We need your help to make this program successful. Donors of $1,000 or more will be listed by name as founding sponsors both in our building and in program materials. Please donate online at mises.org/misesedu. The world needs real economics and real education like never before. 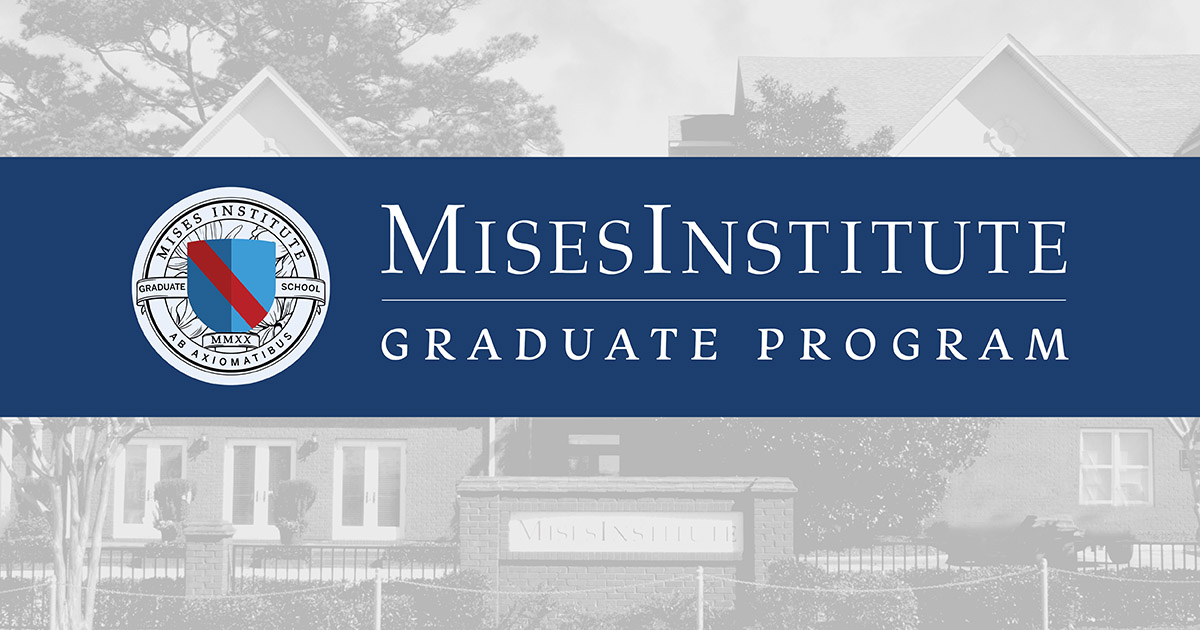 The Marxist Myth of the "Treadmill of Production"

The Marxist "treadmill of production" theory holds that markets cannot grow without creating environmental catastrophes. Here's why they're wrong.

The Unseen Consequences of the Interstate Highway System

Today, it’s easy for socialists to point to the Interstate Highway System and exclaim, "Look at what we socialists did to facilitate transportation." They're careful to always ignore the unseen downside.

Bob Murphy provides the “intelligent layperson a concise yet comprehensive overview of the theory, history, and practice of money and banking, with a focus on the United States.”

The reality is the primary quality of an entrepreneur can’t be taught: the stomach to risk everything and keep wanting more.

It is time to get back to normal life, and that starts with visible human faces.