Listen to Ryan McMaken's commentary on the Radio Rothbard podcast.

One of the reasons that Donald Trump gives for slapping new protectionist tariffs on steel and aluminum is that it will create manufacturing jobs, and by extension, greatly enhance income growth and standards of living in the United States.

Trump is capitalizing on an enduring myth of American economic history in which it is believed that declines in manufacturing jobs are necessarily accompanied by drops in standards of living as well. 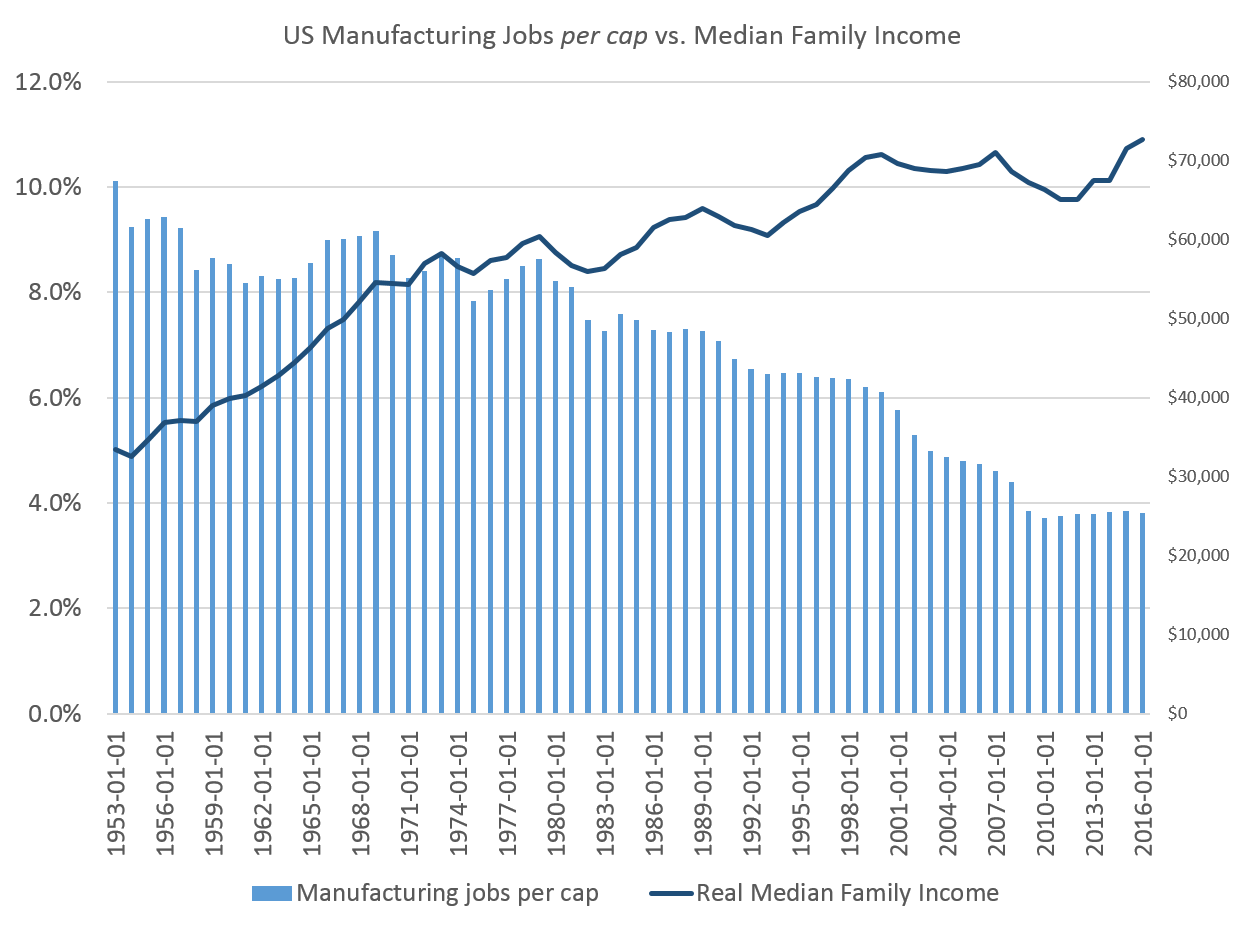 What is often forgotten, however, is that manufacturing jobs, in proportion to the population overall, dropped significantly from the end of World War II through the 1950s and 1960s. And yet, during this time, real median incomes in the United States increased.

In other words, it is not at all clear that falling manufacturing jobs lead to falling incomes or falling standards of living.

Now, pointing out some correlations — or lack thereof — in the data doesn't prove that manufacturing jobs have no connection at all to incomes and wealth. To understand that, we need good economic theory. And, on this point sound economics is clear. Higher taxes — i.e., tariffs — are not the way to economic growth, even if they "protect" manufacturing jobs. But, when these economic arguments are made, proponents of higher tariffs say "we don't need your economics because history proves that manufacturing jobs are necessary for solid economic growth!" and then look to specific examples such as the withering of the rust belt, to make their point. But, when we look at a more complete picture, it appears that history "proves" no such thing.

This should be obvious, of course, to anyone familiar with the history of agriculture in the United States. In the 18th century, nearly all Americans were involved in the production of agricultural products. By 2008, only two percent of Americans worked in the Agriculture sector, even though American agricultural output is now many times larger than what it was in the 19th century, or even during the mid 20th century. 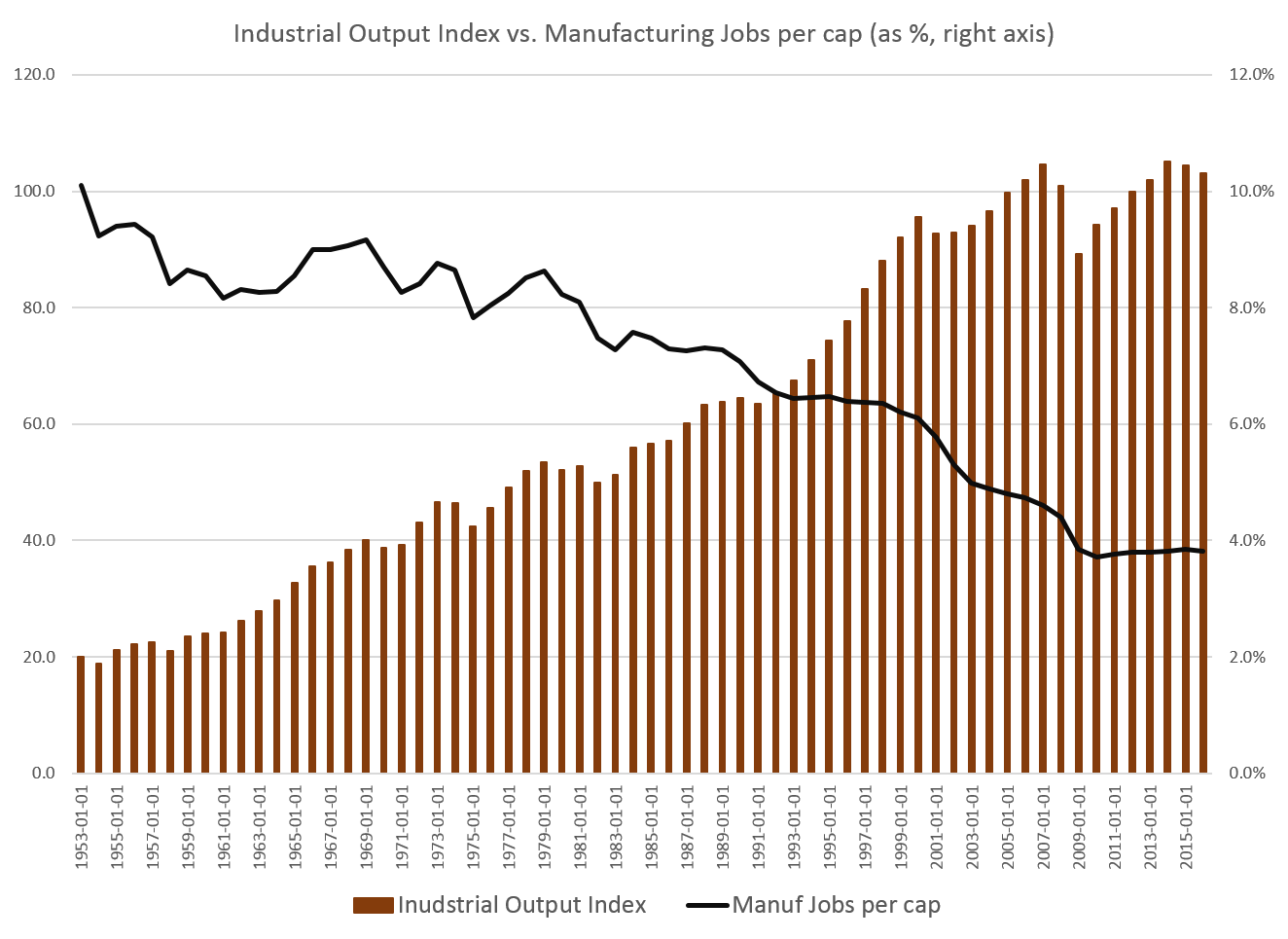 Similarly, if we look at manufacturing and industrial output, firms in the United States produce far more today than they did during the mid 20th century, which was allegedly the good ol' days of manufacturing.

Although manufacturing jobs per capita declined again and again throughout the late 1960s, the 1970s, 1980s and 1990s, we see actual manufacturing and industrial output increasing.

Indeed, the continued growth of manufacturing and industrial production — with "industrial" output including mining, and energy production — shows that the old saw of "we don't make things in America anymore" is simply a false statement.

Firms in the United States are making things, and making things of higher value, than was the case in the past. What is different is that fewer and fewer human beings are necessary to make these things.

Thanks to automation and other improvements in productivity, it now takes fewer people to make more things.

All things being equal, more output per person means more productivity, and less expensive goods. This, in turn leads to rising real incomes.

Now, as I've noted in the past at mises.org, we do start to encounter problems with real incomes in the United States after 2001. Even if we look at three different measures of median incomes, we do see that median incomes stagnated from 2001 to 2015. It's only been in the last two or three years that we've finally begun to see median incomes surpass where they reached in 2007, before the last financial crisis. It took more than eight years for incomes to recover after that last boom.

It would be supremely simplistic however, to look at this malaise in incomes since 2001 then declare that the answer must lie in ginning up manufacturing employment.

Things become especially dangerous once policymakers begin turning to government interventions to increase manufacturing employment in order to "make America great again." But that is what we're now facing from the Trump administration. The White House has legally justified the tariff increase on national security, because that's how the President can get away with imposing new taxes via executive order.

However, the administration relies on public misconceptions about the history of manufacturing jobs and incomes in order to enhance political support for the move.

In practice, however, the central premise of the Trump tariff strategy is based on increasing in the cost of doing business in the United States, while increasing the cost of living. By raising tariffs on steel and aluminum, the administration is creating new hurdles for most firms seeking to increase industrial and manufacturing output. This is true because only a tiny portion of firms and workers actually benefit from tariffs. The overwhelming majority of workers are in industries that benefit from lower-priced steel and aluminum.1 According to studies conducted in the wake of the George W. Bush administration's steel tariffs, it appears that tariff policy is more likely to hurt manufacturing than help it.

Through press releases from the White House and its friends, we will no doubt hear about the small handful of firms that benefit from tariffs. But we may not hear anything from the firms that scale back employment or output as a result of higher costs.2