Not Even the Pentagon Thinks Tariffs Are Needed for National Defense

When politicians run out of good arguments, their last refuge is often the claim that what they want is "necessary for national defense."

Given that there are no good economic arguments in favor of tariffs, it makes sense that the administration has now resorted to the political "national defense" argument instead.

So, even if the Trump administration were forced to admit that, yes, tariffs are bad for the incomes and standards of living for most Americans, they could still argue that everyone must make sacrifices for the sake of national security.

But does that argument hold any water?

In a Defense Department memo, in response to the President's tariff proposal, the Secretary of Defense states that the tariffs are not necessary:

... the US military requirements for steel and aluminum each only represent about three percent of US production. Therefore, DoD does not believe that the finds in the reports impact the ability of DoD programs to acquire the steel or aluminum necessary to meet national defense requirements

"The reports" mentioned here are Commerce Department reports pushing for the tariffs.

The Defense Department memo goes on to advocate for a far more limited tariff than what the Trump administration wants, stating "DoD continues to be concerned about the negative impact on our key allies regarding the recommended options within the reports ... targeted tariffs are more preferable than a global quota or global tariff."

The memo then concludes by noting that if the administration must have steel tariffs, it should at least wait on imposing aluminum tariffs.

Given that it is in the best interests of the Pentagon to overstate the security threats to the United States, the Department's opposition to the scope and severity of the administration's tariffs highlight just how truly unnecessary the tariffs are.

The DoD worries, as it should, that tariffs harm the American relationship with allies, and thus harm American security efforts.

Even worse, tariffs are harmful to domestic economic strength, which is the real source of both hard and soft American power internationally.

Policies that are likely to diminish American productivity and competitiveness ultimately pose a direct threat to long term security efforts.

As political scientist John Mueller has compellingly argued, it has long been the potential military production of the US, and not the current military budget or the current manufacturing output that has made other regimes fearful of conflict with the US military. That potential power is measured in current economic power and productivity. Tariffs, on the other hand, are likely to only hurt American economic production.

How Much Steel Does the US Get From China?

But even if the US, for military reasons, needed to gear up and start using steel for equipment overnight, how much of that would really depend on domestic sources?

Well, as the Pentagon itself notes, it only needs three percent of US production.

Let's ignore that number, though, and just pretend that the DoD would need foreign steel for military purposes.

How much of that would need to come from China? 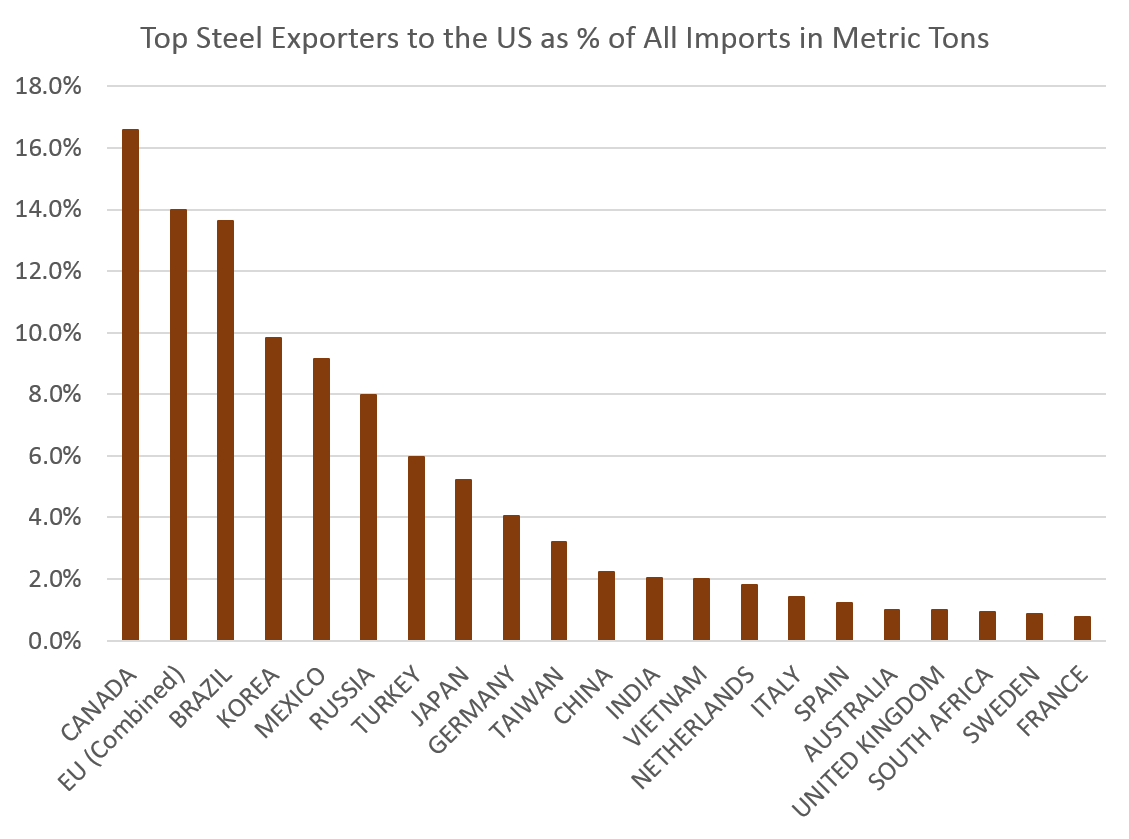 Well, as it now stands, according to the Commerce Department's own data, the US imports 2.2 percent of its steel from China.

Now, the administration has attempted to gin up this number by claiming that the Chinese are engaged in shadow imports of steel through the process of "transshipment." This happens when the Chinese export to some other country, and then that country adds value to the steel and exports the new product to the US.

The Trump Administration is implying this happens a lot, although they haven't managed to provide any actual supporting data.

Researchers outside the administration, however, have estimated that if transshipment-sourced steel is included, then total Chinese steel imports amount to about four percent.

Why is this important? Well, the whole national-defense argument behind the administration's claims is based on the idea that hostile foreign powers will cut off US access to steel. At the top of the list of these "hostile powers" of course, is China. The argument also relies on the idea that if certain hostile powers cut off access to steel, it would also be impossible to make up the difference in imports from allies.

But, as we've seen, China is a very small source of steel for the US, and out of the ten top foreign sources for US steel, eight of them are longtime US allies, including Canada, Japan, Mexico, Brazil, and Germany. Canada, which has been at peace with the US for 200 years, is by far, the largest exporter of steel to the US, making up 16.5 percent of all imports into the US. EU countries, the UK, and Australia combined offer an additional 15 percent.

And yet, the administration has seen fit to impose a massive tariff hike on all of these allies in addition to the hike imposed on China - with the exception of Canada and Mexico.

Only China is being accused of "dumping" and other unfair practices, but it's a bevy of US military allies with whom trade will suffer even more given their more prominent role in trading steel with Americans.

It's easy to see why the Department of Defense expressed caution toward the imposition of Trumps' global tariff scheme. Needlessly antagonizing allies hardly contributes to successful national defense.

And finally, there's the fact that steel tariffs are likely to actually hurt the productivity of defense contractors (and manufacturers in general) in the US.

This [aerospace] industry contributes to America’s economic and national security in part by leveraging access to a global supply chain to produce the best products at the best price for our customers in a highly competitive international market. We need global sources of aluminum and steel to remain competitive, and demand for these products is increasing. Quotas risk reducing our access to these basic materials. Tariffs do not address all the necessary market conditions, such as energy costs, for new U.S. aluminum production to remain viable.

Before issuing tariffs or quotas on aluminum and steel, Trump should consider the impacts of increased costs, decreased supply and disruption to the supply chain on a successful industry that is a key contributor to the U.S. economy. Our country’s history of imposing tariffs on raw materials like steel is not a good one. A study funded by the Consuming Industries Trade Action Coalition Foundation in 2003 found that raised prices resulting from the most recent tariffs imposed on imported steel in 2002 cost more jobs in the broader economy than existed in the steel industry at the time.

In other words, driving up the cost of steel and aluminum simply reduces the amounts of resources that are available in the US for military purposes.

But this isn't likely to change the mind of anyone in the White House. Like so many politicians before him, Trump justifies his foreign policy by invoking the most hysterical and unlikely scenarios imaginable — while pretending that there is no opportunity cost in planning for such scenarios.

The current claim is that the US must be prepared for the possibility that all foreign trading partners will cut the US off from steel — something that has about a zero percent chance of happening.

Besides, the administration obviously doesn't actually believe this is likely to happen since it has no problem with entering into enormous weapons export deals with foreign states. The Trump administration has been openly pushing for greater arms sales to foreign regimes, including the terrorist-supporting regime in Saudi Arabia. Other recipients of American military weaponry and aid include Turkey, India, Iraq, Egypt, and South Korea. The US even sends weapons to Vietnam.

The US State Department also provides billions in financing to purchase weapons to Egypt, Jordan, Iraq, and Pakistan.

So, we're supposed to function under the paranoid assumption that the whole world is likely to cut off the US from trade — while at the same time shipping weapons and aid to those same countries that we assume will conspire to crush American access to steel.

Obviously, these claims aren't especially convincing once we consider the full context.

But none of that really matters, since it's fairly clear that the real motivations behind the administration tariffs lie elsewhere . The national-defense argument is just part of a larger political strategy to throw every possible justification at the wall and see what sticks. One minute, the administration pushes tariffs because of "unfair trade." The next minute, it's to "create jobs." The next minute, it's about national defense.

In any case, it's always been clear that good economics never had anything to do with the the President's trade policies. But his unconvincing claims about military defense show that his other arguments aren't much better.