Why Median Incomes Probably Are Really Going Down

In response to last week's post on median incomes, several readers responded on Twitter with links to posts by the American Enterprise Institute think tank which explain some of the problems with using measures of household income.

At the Mises Institute, we're not exactly in the business of helping the US government defend it's own economic data, but the discussion raises some opportunities to look at the problem of relying strictly on empirical data without the backing of sound economic theory.

The issues with household median income are highlighted in more than one post by Mark Perry at the AEI site in which Perry presents several variables that may be affecting the trend in median household incomes. Overall, Perry's goal is to show that our view of the trend in incomes may be skewed by factors that don't really point toward a worsening economy.

Before we proceed, let's first note that personal median income also shows a decline over the same period as median family income and median household income: 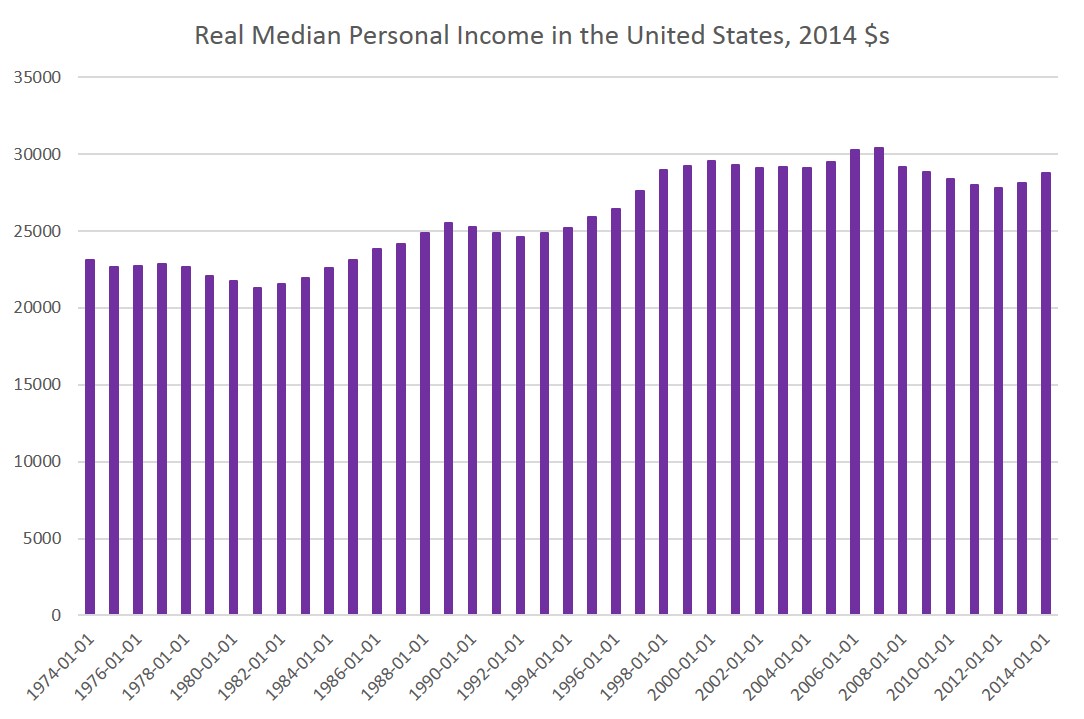 A second point to make is that the income figures collected for these statistics are not limited to wage income. The totals include income from a variety of sources including welfare, alimony, dividend income, and income from other investments. These figures do ignore non-cash income, such as food stamps and government-funded housing vouchers obtained through government programs like the Housing Choice Voucher program, better known as "Section 8."

So, the proliferation of food stamps in recent years should ideally be a factor in these numbers, although it is not. On the other hand, let's keep in mind that when we're talking about the effects of retirees on household income, we're still capturing income from investments and government programs. People don't disappear from these statistics if they leave the ranks of wage earners.

Factors that Could Contribute to Falling Incomes, But Don't Point to a Worsening Economy

Perry's most comprehensive post on this topic appears to be this piece on numerous factors that affect median household income. These factors can cause median incomes to decline, but don't necessarily suggest a stagnating or worsening economy. Specifically:

In other words, it could be that individual incomes are going up, even if household incomes are declining.

Perry is correct that all of these factors could be contributing to a decline in household median wages, and that falling household wages are not necessarily evidence of a stagnating economy. If workers are satisfied with their standard of living and their future prospects, they may elect to work fewer hours now, or to retire. This is no doubt true in at least some cases.

Other Data that Points to Economic Stagnation

On the other hand, all of these variables could also be interpreted as evidence of economic stagnation.

For example, in a stagnating economy, older workers may elect to retire early rather than continue to look for work in a lackluster economy, or they may not want to keep working for wages that may be stagnating in real terms. Or, workers may be working fewer hours because they can't find full-time work.

This is why we must look for other indicators of economic growth and productivity in order to hazard a guess about the economic realities behind some of these statistics.

This is precisely why in my post on median wages, I looked at GDP numbers, with a special focus on the GDP with government spending subtracted. In that case, we do indeed find evidence of economic stagnation, and we can note that the economy did not bounce back after the 2008 recession that way it had after previous post-war recessions.

Secondly, in my article on employment found here, we can see that involuntary part time employment is a real factor, and that there are currently six million workers who work part time "for economic reasons" which means they would rather have full-time work. With around six million involuntary part timers now, totals are still well above what they were during the last expansion, and we must go back to recessionary periods (i.e., the early 1990s and 2008) to find similar rates of involuntary part-time employment. Indeed, if we look at total unemployed plus involuntary part timers, we see that 9 percent of workers fall into this category. That's very good compared to five years ago, but we're now seven years into this expansion, and by this measure, it does not look like employment will improve in this cycle to the point where it will be comparable to the good years of the late 1990s or to the mid 2000s.

Given both weak GDP growth and historically weak job growth numbers, we have reason to suspect that the declining median income numbers are not actually masking a period of great economic prosperity.

However, we might also note that this trend itself can have a negative impact on standards of living. As many years of sociological data suggest, single-parent households are, in fact, less economically stable, and tend to be more at risk in other ways. As this Slate article notes "research suggests that the children of never-married single parents tend to do somewhat worse than children of divorced single parents." Boys of single parents, for example, are more likely to end up in jail. Having a single-parent, statistically speaking, really does make you worse off, and the rise of this phenomenon over time could contribute to a falling median income trend. In other words, it's not just statistical noise.

Why We Need Economic Theory

And this is where economic theory comes in. We can't prove causality with one of these government statistics, so we have to turn to theory.

This is why Ludwig von Mises referred to statistics and numerical analysis as "history" and not really as economics. Mises believed we can only determine causality using economics, which is a purely logical discipline based on core assumptions about human action. Quantitative analysis can help us figure out how to apply economic theory, but only good economics (in the Misesian sense) will tell us the direction of causation.

Economics, for instance, tells us that government intervention in the economy will negatively impact the economy in a variety of ways. When we look at the economy, we find record rates of tax collection, we find relentless interference in the money system through central bank intervention, and every year, the noose tightens more for small businesses and entrepreneurs in the form of more regulation.

So why should our working assumption be that things are swell and that those leftists are just trying to paint an unduly dour picture of the economy? It could be that the leftists are right about the state of median incomes in the United States, even if their proposed solutions are very wrong.