GET NEWS AND ARTICLES IN YOUR INBOXPrint
A
A
Home | Mises Library | Demagoguery vs. Data on Employment in America

Demagoguery vs. Data on Employment in America 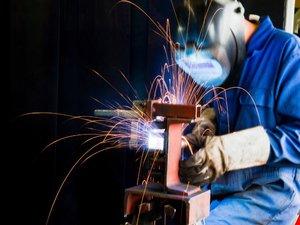 Demagogue politicians love to play on popular fears that low-wage foreigners are “stealing” good paying American jobs by way of outsourcing and globalization. The claim is made by protectionists of all political stripes, whether leftists complaining of a “rigged economy” or rightists speaking of other countries “beating us” economically.

A sound economic analysis of the claim about job losses due to international trade should address two questions: First, is it true that the US has lost jobs due to trade (or other factors)? Second, is this phenomenon good or bad overall for the US and world economies?

On the first point, it can appear as though the US has lost jobs. For example, as Figure 1 shows, manufacturing employment in the US has declined by about 2 million from pre-Great Recession levels, and is down by over 7 million, or 37 percent, from the all-time high reached in 1979.

The problem, though, is that by looking at manufacturing in terms of jobs, we’re missing the full picture of industrial production.

Nevertheless, the demagogues still argue that, even though high-paying service sector jobs have more than replaced lost factory jobs, “we don’t make things here anymore” and we should lament this. This oft-heard refrain is patently false. We don’t make certain things, such as garments, toys or electronics, because global free trade and technological advances tend to shift America’s output into those industries in which our comparative advantage is greatest. But Americans do indeed make things — quite valuable things.

This can be seen in Figure 2, which shows the US Industrial Production Index for the “de-industrialization” period. After the expected steep decline following the Great Recession of 2008–2009, US manufacturing has slowly bounced back and is now producing more products, in value-added terms, than ever before. Indeed, this index, which consists mainly of manufacturing, has grown by over 100 percent since the 1979 peak in manufacturing employment.

In other words, thanks to productivity gains, we need fewer workers to make more stuff.

From an economic perspective, nothing could be better news. US manufacturing creates 100 percent more value with 37 percent fewer workers. Creating more value with fewer workers means we’re more efficient than ever, or put another way, more productive than ever. These awesome productivity gains have many sources, especially in the form of technological advances in areas like software, robotics, and communications. Globalization and outsourcing have also played a role, as they allow American workers a greater degree of specialization in those sectors where our productivity edge is largest.

The good news gets better, though: not only have we gained jobs on net, but jobs have grown faster than the population over time. Since the 1979 peak in manufacturing employment, the US adult population grew by 53 percent, whereas employment grew by 59 percent, as shown in Figure 3. 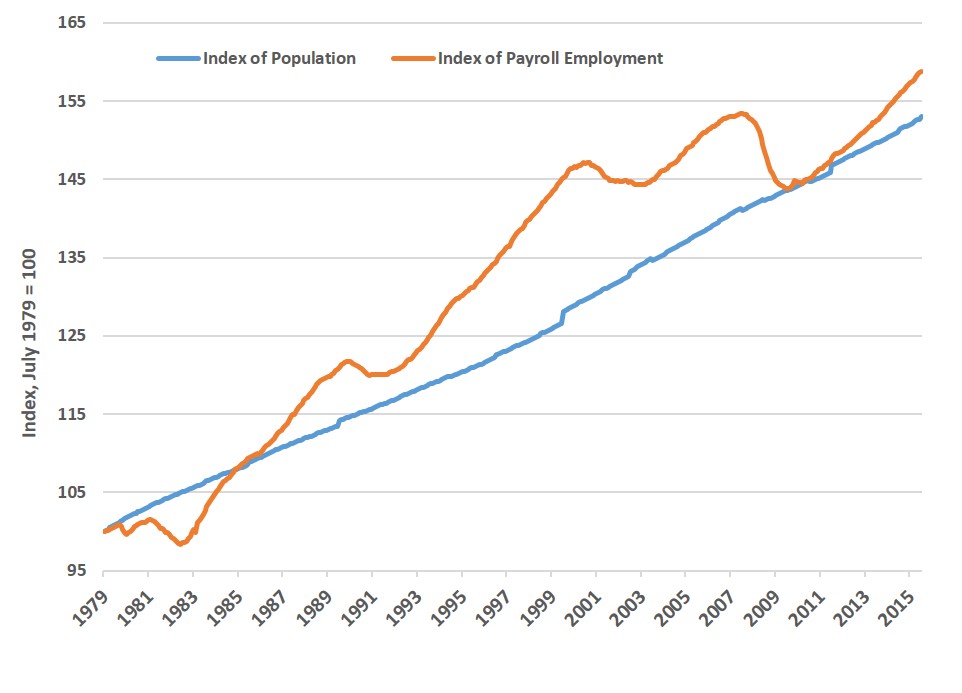 Table 1 presents Bureau of Labor Statistics data on the 15 largest sectors and sub-sectors of the US economy, which together represent over 96 percent of the total net increase in payroll employment for the post-peak manufacturing jobs era (1979 to 2016). This might come as a surprise to the anti-globalization crowd: despite the loss of 7 million manufacturing jobs (and some mining, logging, and utilities sector jobs), we’ve seen a net increase of nearly 53 million total jobs. Of these net new jobs, fully 62 percent of them feature, as of January 2016, average hourly earnings equal to or greater than current average hourly manufacturing earnings. In other words, most of the 53 million new jobs pay the same or better wages than the demagogues’ benchmark “good” manufacturing jobs. So we lost 7 million good jobs, only to gain about 32 million equal or better-paying jobs, along with about 19 million lower-paying jobs (about 38 percent of net new jobs pay less than manufacturing). 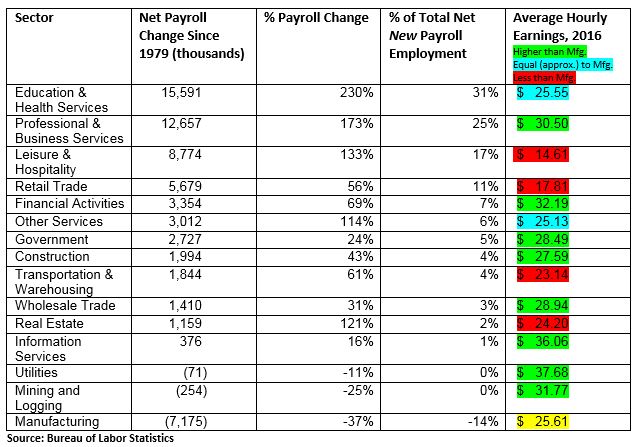 We’ve established that, despite a major decrease in employment in the manufacturing sector, we’ve gained many more jobs than we’ve lost in the past 35 years or so, and that most of these new jobs pay better to boot. Economic changes, while painful in the short run, have brought gains in output and employment not only for the US, but for the rest of the world as well. Overall, this is good news for the US and world economies.

So, as the campaign season heats up, let’s not be misled by baseless arguments about America “losing jobs” or other countries “beating us” at trade. Trade is a positive sum game, and the benefits for both the US and world economies are, shall we say, “yuge.”

Tyler Watts earned his PhD in economics at George Mason University in 2010. He currently...

Demagoguery vs. Data on Employment in America

While fewer people work in manufacturing jobs today, American workers make more stuff than ever before, thanks to...