GET NEWS AND ARTICLES IN YOUR INBOXPrint
A
A
Home | Wire | Hey Big Spender: France's Robust Military Spending

When French President Francois Hollande declared this week that France is "at war," this could only possibly have been news to people who weren't paying attention. Of course, France is at war. France has been bombing foreign targets for years, and making war in numerous locales across the globe.

One of the purposes of last week's terrorist attacks was to inflict casualties on the French population, which has been funding a massive French military apparatus for decades, albeit some French taxpayers no doubt do this against their will.

Yesterday, we took a look at France's very active role in a variety of military interventions across the globe, including the Middle East and Africa, as well as France's brutal colonial history in both regions. As Business Insider reported earlier this year, "France's Military is All Over Africa."

While military spending is certainly not a perfect metric as far as military intervention goes, it does nevertheless provide at least a partial indicator as to how active a state is. And, in the case of France, it gives us insight into France's willingness to spend a lot of money on military intervention.

Moreover, we should note that, historically, France has long been something of an outlier in Western Europe. France withdrew from being a full member of NATO in 1966, and remained partially separated for decades. The reason for French withdrawal is instructive, however. A main source of conflict between France and NATO was that France believed that NATO was not militarily aggressive enough.  France's effort to develop it's own non-NATO defense capability, including the development of its own nuclear arsenal in the 1960s, was to ensure that the French military could operate in its own colonial and post-colonial conflicts more freely. Under de Gaulle, France had attempted to draw NATO into France's colonial conflicts (on France's side, of course). de Gaulle claimed that Algeria was part of France and thus was part of NATO. Therefore, NATO must intervene to assist France in putting down Algerian independence movements. After the British and Americans refused to assist with French colonialism, de Gaulle expelled NATO troops from France and set up a more independent French military.

By the Numbers: French Military Spending

In a global context, France is a big spender. (US military spending is so immense, I've left it off the graph to allow for more detailed comparison): 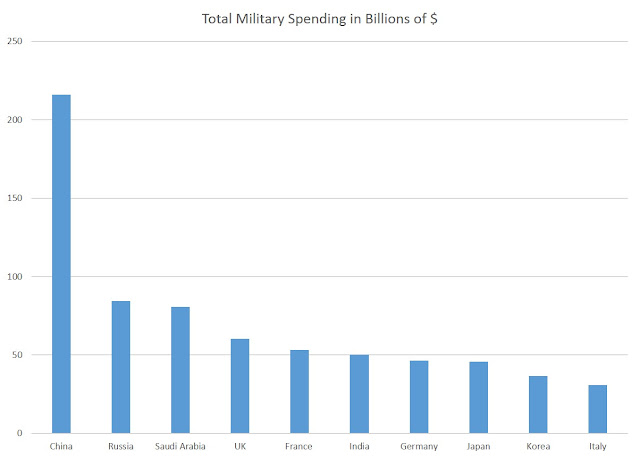 According to SIPRI, In total dollar terms, France spent 53.1 billion in 2014, which made it a peer country with the UK ($60.5 billion) and India ($50 billion.) France spends more on defense, however than South Korea (36.7 billion), which has North Korea as a neighbor.

Of course, France is a relatively small country and borders only friendly Western European countries. However, in terms of military spending as a percentage of GDP, France spends nearly as much as China: 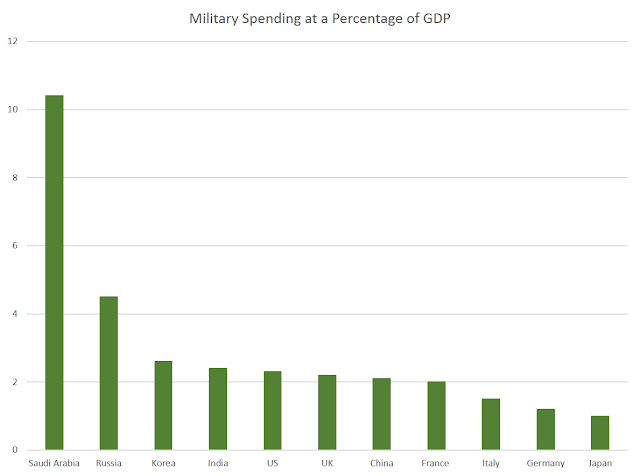 France also has the third-largest nuclear arsenal on earth. While Russia and the US both have more than 7,000 warheads and enough nuclear firepower to destroy the planet many times over, the French have 300 warheads, which makes them better armed (in nuclear terms) than China (with 260 warheads): 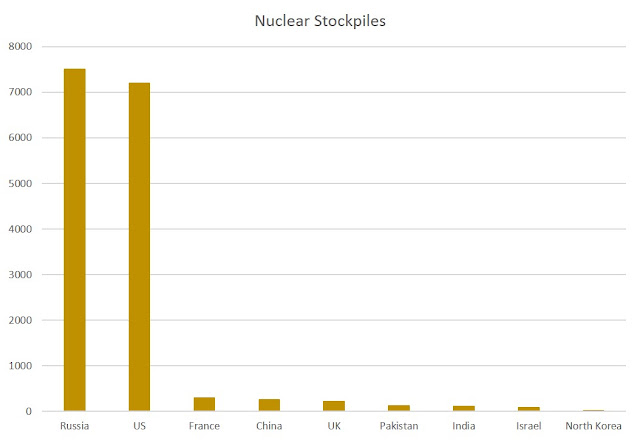 And finally, we find that military spending in Western Europe, in real terms, is today similar to late-Cold-War levels. As in the US, there was a decline in spending in the late 1990s followed by a sizable buildup from 2002 to 2008. Compared to the three largest military spenders in NATO (other than the US. Spain added for additional context): 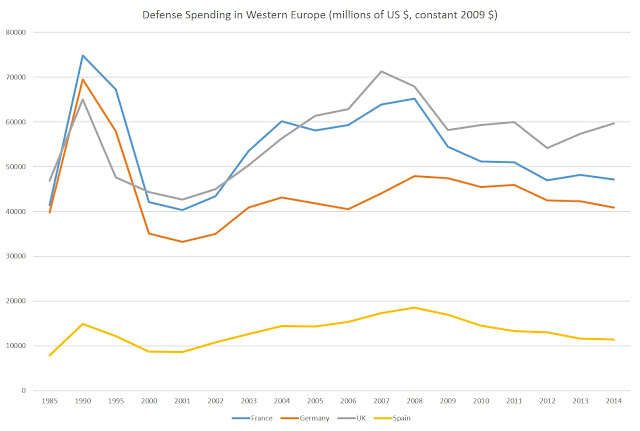 Source: NATO (Note that the first three time periods are in 5-year intervals.)

As with the US, military spending has begun to decline since the financial crises of 2008-2009, although these declines follow numerous years of building defense budgets up to 2008. Overall, French defense spending has remained in the $45 billion to $60 billion range over the past 15 years.

In fact, in terms of proportional growth, France largely follows the US over the past decade: 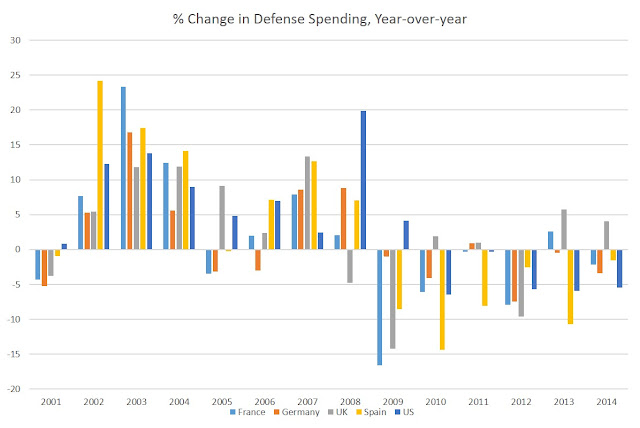 By itself, of course, military spending is not enough to demonstrate any particular type of foreign policy. After all, the United States during the Reagan years engaged in very little direct military action.  It relied more on indirect proxy wars and weapons trafficking. France, however, like the US since the 1990s, has chosen to increase its direct military intervention in a variety of conflicts.