GET NEWS AND ARTICLES IN YOUR INBOXPrint
A
A
Home | Mises Library | No, the Military Has Not Withered Away Under Obama

No, the Military Has Not Withered Away Under Obama 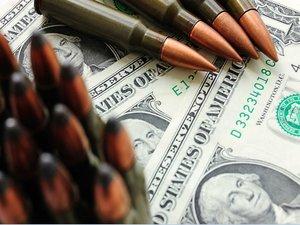 It is common to see articles and columns in the Conservative media claiming that President Obama is engaging in “historic defense cuts.” There are claims that not in decades has the military ever endured such budget slashing. “Romney blasts Obama over military cutbacks” one headline blares.

Upon closer examination of these claims, one notes that the authors are careful to never mention actual dollar amounts in context, or any meaningful historical context beyond single recent year-over-year comparisons.

And it’s not surprising that total military spending is never mentioned. Because, if it were, it would quickly become apparent that military spending is in fact near historic highs, and above the levels of spending that occurred under Ronald Reagan during his own Cold War buildup.

So, if you are worried about military spending, you can rest easy. Nor is there any cause for alarm in the wake of the most recent budget deal approved by Republican leaders and Obama. There will be nothing but budget increases over the next two years:

The plan will lift caps on the appropriated spending passed by Congress each year by $50 billion in 2016 and $30 billion in 2017, evenly divided between defense and domestic programs. Another approximately $16 billion would come each year in the form of inflated war spending, evenly split between the Defense and State departments.

So, not only will there be more base-level defense spending, but what is currently in the agreement can also be voided in favor of even more defense spending in case of new wars.

Even if there were “cuts” on the table, its unlikely military spending would be cut back to Cold War levels, let alone to Vietnam War-era levels. Here is military spending (excluding spending on veterans, diplomatic programs, and Homeland Security) in constant 2009 dollars: 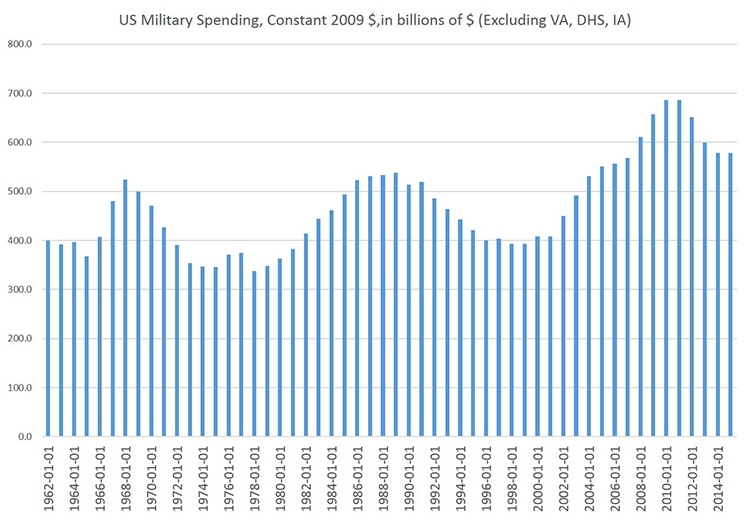 But this graph only tells part of the story. As I explained here in response to last year’s estimates, defense spending analysis must include veterans benefits, which are crucial in meeting recruitment goals in the military and are an integral part of active-duty personnel costs. Thus, current VA spending is just spending deferred from previous military operations. They are not in any meaningful way separate from defense spending.

Moreover, since 2002, the federal government has folded several programs  under “Homeland Security” that are defense expenditures, but not part of the Department of Defense. If we include these other forms of defense spending, we find national defense spending has increased even more than initially thought: 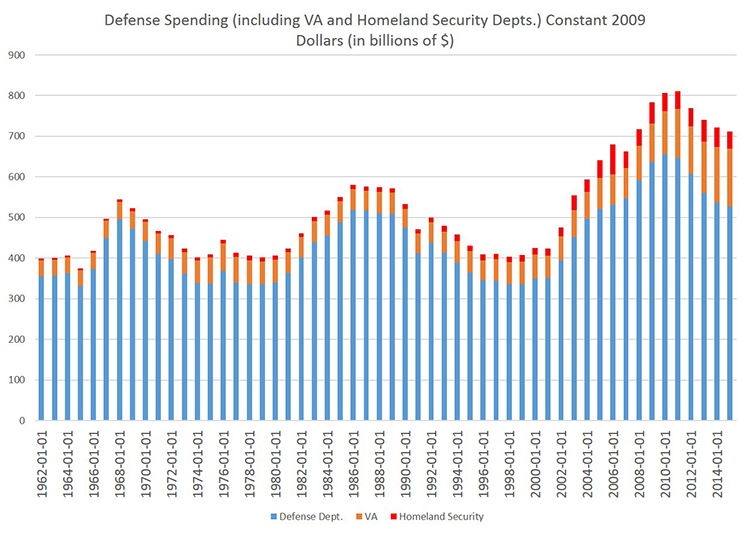 In both of these graphs, I have excluded “international affairs” spending such as dollars spent on foreign aid and embassies. So, I’m low-balling total spending here.

In spite of this, Conservative and Republican pundits have attempted to portray President Obama as some sort of peacenik. This has never been true, and it is reflected in the government spending initiatives he has approved.

In spite of all of this, we’re being told by advocates for more government spending that the military is withering away just as the world becomes more dangerous than ever before. We’re supposed to believe, for example, that things are more dangerous now than they were in, say, 1949, when the Soviet Union acquired its own atomic bomb and began to build a nuclear arsenal. At the time, US military spending was under $60 billion dollars (in 1982 dollars), or about one-quarter the size of the spending under Reagan.

What Would Eisenhower Do?

As David Stockman has noted, Eisenhower, perhaps because of his status as a revered military figure, was able to get away with large cuts to military spending:

Eisenhower ... did not hesitate to wield the budgetary knife. When he did so, the blade came down squarely on the Pentagon ...

With Eisenhower’s blessing, the budget request inherited from Truman was slashed by nearly 30 percent, with more cuts targeted for future years ...

Although defense spending never did shrink all the way to Ike’s target, the wind-down of Truman’s war budget was swift and drastic. When measured in constant 2005 dollars of purchasing power, the defense budget was reduced from a peak of $515 billion in fiscal 1953 to $370 billion by fiscal 1956. It remained at that level through the end of Eisenhower’s second term.

Robert Higgs, in his analysis of defense spending, has used different calculations, but here also we see a decline of 23 percent from 1953 to 1956: 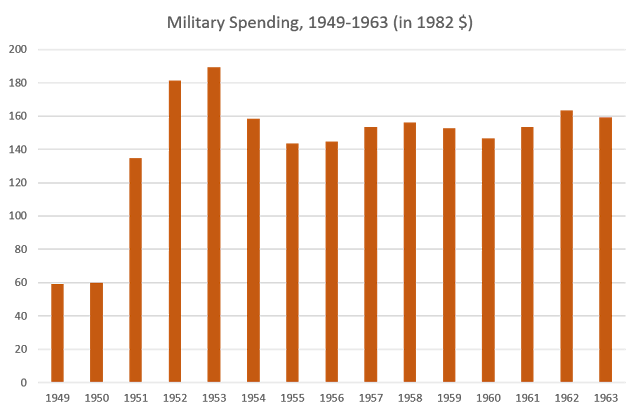 Source: “US Military Spending in the Cold War Era” by Robert Higgs

By the way, in 1953, right before Eisenhower began to intensify military cuts, the Soviet Union publicly tested its first hydrogen bomb, a 400-kiloton device.

Even though Democrats charged that Eisenhower and Humphrey were “allowing their Neanderthal fiscal views to endanger the national security,” the actual record proves the administration’s drastic rollback of Pentagon spending was not based merely on penny-pinching. Instead, it flowed from a reasoned retrenchment of the nation’s national security strategy called the “New Look.”

The new policy doctrine of the Eisenhower administration called for a sharp reduction in land and naval forces. That move was coupled with a significantly increased reliance for nuclear deterrence on the air force bomber fleet and the rapid development of intercontinental ballistic missiles.

In other words, by cutting back on the standing army, Eisenhower abandoned the ability to invade and occupy foreign countries in favor of a less expensive military based more heavily on nuclear deterrence.

Not even Eisenhower was immune to charges of being a communist sympathizer, but we can be sure that if any president today attempted anything similar to what Eisenhower attempted, he would be immediately denounced as a terrorist and collaborator.

And, naturally, we have every reason to believe that, regardless of who the president is, military spending will spike again the next time a president mobilizes for a new war, whether it’s in Ukraine, Syria, or some other exotic location where we will be assured that the absolutely vital interests of the US are in grave danger.