For those workers whose productivity remains above the newly mandated wages, they will likely keep their jobs and see no change. However, for teenagers, the poorly educated, and others with few skills, the new higher wage will price them out of a job.

In the short term, even some workers with productivity levels below the mandated wage may keep their jobs. For a time. In the medium to long term, however, those workers will either be replaced by automation, or employers will simply cease to hire low-productivity workers.

How to Really Increase Wages

As we've covered here and here at mises.org, the only way to sustainably increase the wages of workers is to increase their productivity. If a worker's wages are to go up, there must either be an increase in the demand for that worker's services, or the worker must be able to produce more in less time.

Nowadays, however, many continue to entertain the idea that this process of increasing wages via productivity can simply be skipped over, and that wages can be increased via government fiat.

In order to support this position, however, one must forget everything one already knows about prices and demand. After all, many of the same people who advocate for a minimum wage will also advocate for taxes on tobacco and other "socially undesirable" products. They know that raising the price of a good or service reduces the demand for it.

At the same time, however, it is believed that raising the price of labor somehow magically has no effect on the demand for labor, and that employers will continue to demand the same amount of labor at a higher price as they would have demanded at a lower price.

Why Slowly Increasing the Minimum Wage Appears to Work

Thanks to price inflation and gains in productivity-enhancing technologies over time, the effects of minimum wage increases can be masked over time. For example, if an employer is paying the least productive workers 10 dollars per hour today, inflation will ensure that same workers is earning less in real terms in future — assuming that specific worker does not become any more productive. Thus, if wage mandates increase slowly, the damage done by them is mitigated by inflation and the effects are unlikely to show up in the aggregate employment data. Advocates can then claim there is no effect on employment.

Many low-skilled workers will still be harmed, of course, and this is why unemployment among teenagers remains at historic highs. Those young people will be robbed of years of work experience — and earnings — by the minimum wage. But, overall, the numbers may be small enough to not become a political issue in the government's hiring statistics. Or, many low-skilled workers may simply elect to not enter the work force at all and thus they will never show up in government unemployment numbers.

But, before we go on, let's look at the specifics for each state. USA Today has summarized the four new minimum-wage mandates:

In Arizona, the outcome means the state's current $8.05-an-hour minimum wage will rise to $10 next year and gradually increase to $12 in 2020. Starting in 2021, the pay rate will be adjusted annually based on the state's cost of living.

Colorado voters similarly approved a gradual hike in the state's $8.31-an-hour minimum wage, starting with an increase to $9.30 per hour in 2017. The pay rate will increase 90 cents in successive years until it reaches $12 per hour in 2020. The rate will also get an annual cost of living adjustment as of 2021.

Maine's current $7.50-an-hour minimum will also rise to $12 by 2020. The change will start with an increase to $9 per hour in 2017, followed by three years of $1-an-hour hikes. Increases after that would be determined by inflation.

Washington voters approved an even larger increase. The western state's current $9.47-an-hour minimum wage will rise to $13.50 by 2020, starting with a jump to $11 next year. Cost of living adjustments would determine the rate after 2020.

Thanks to these measure, some have claimed that millions of workers will see their wages increase:

Roughly 2 million workers in the four states will see their wages increase, according to the National Employment Law Project, a worker advocacy organization.

This assumes, of course, that those workers will not be replaced by automation — as is the case with many food service jobs today — and it also assumes that all employers will continue to deem those jobs essential at higher cost.

Minimum Wages Are Increasing the Cost of Living

If employers decide to continue employing those workers, in order to remain in business, they will attempt to pass on some of that cost to the customers. Indeed, it is already now becoming apparent that the cost of both child care and schooling will increase as the cost of labor in those fields increases. In this news story form Washington State, one mother reports her child care bill has increased by 300 dollars. In this report from Colorado, it is clear the increase in the minimum wage is likely to reduce the amount of staff available to schools. School districts will either need to increase taxes or cut services.

Similarly, we can look for similar effects in nursing homes, hospices, hospitals, and other industries that rely on large numbers of food service workers, orderlies, and cleaning staff.

In other words, caring for children and the elderly is about to get more expensive.

Meanwhile, the workers in those fields will find fewer jobs, those who retain their jobs will be paying more to care for their children or elderly parents.

High productivity workers who are childless and not in deed of health care for themselves or family members will do well in the wake of this minimum wage increase. Everyone else will be facing a higher cost of living.

And which state will be hit the hardest? It's hard to say with certainty, but generally speaking, the state that increases minimum wages the most above and beyond median wages is likely to see the most negative effects.

We're generalizing a bit from just food service workers, but all other things being equal, it's likely that Arizona workers will suffer the most from their recently-approved minimum wage increase. Since the effective increase in Arizona is the largest of the four states, we're more likely to see more employers in Arizona either lay workers off or — more likely — refrain from hiring as many low-skilled workers. 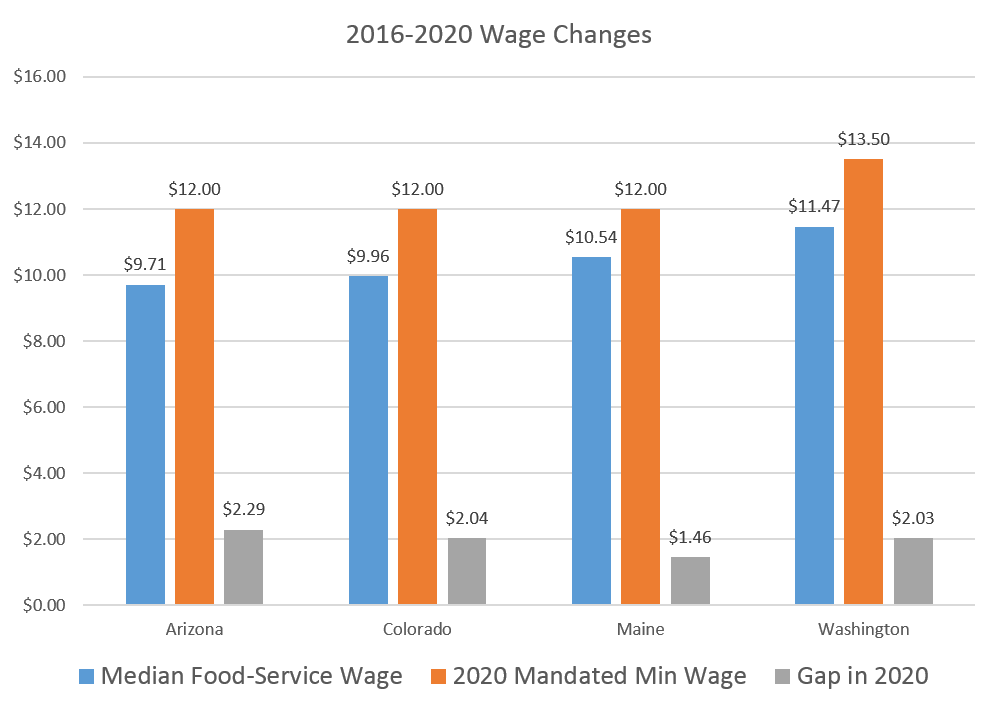 But, if we're looking for a silver lining here, we can at least take solace in the fact that minimum wage increases are at least being limited to the state level. As discussed here, minimum wage increases become far more damaging at the federal level since they apply a single blanket wage to a country that has substantial differences in local median wages and costs of living.

Were Alabama, for example, to adopt a 12-dollar minimum wage, that would mean hike of more than three dollars above that state's median food-service wage of 8.97. The negative effects on employment in that case would be larger.