GET NEWS AND ARTICLES IN YOUR INBOXPrint
A
A
Home | Wire | DEA Releases New Drug Overdose Death Figures: Guns Safer than Prescription Drugs

DEA Acting Administrator Chuck Rosenberg today announced results from the 2015 National Drug Threat Assessment (NDTA), which found that drug overdose deaths are the leading cause of injury death in the United States, ahead of deaths from motor vehicle accidents and firearms.  In 2013, more than 46,000 people in the United States died from a drug overdose and more than half of those were caused by prescription painkillers and heroin.

These are 2013 numbers, so let's compare to other causes of death in the United States, according to the Centers for Disease Control. 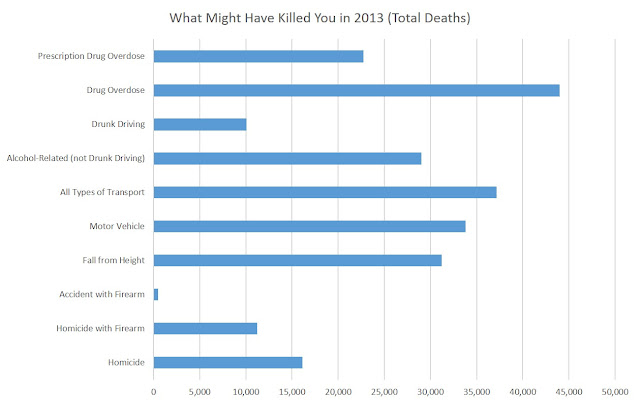 Those are the total numbers. If you prefer your stats in the often used format of x per 100,000, here you go: 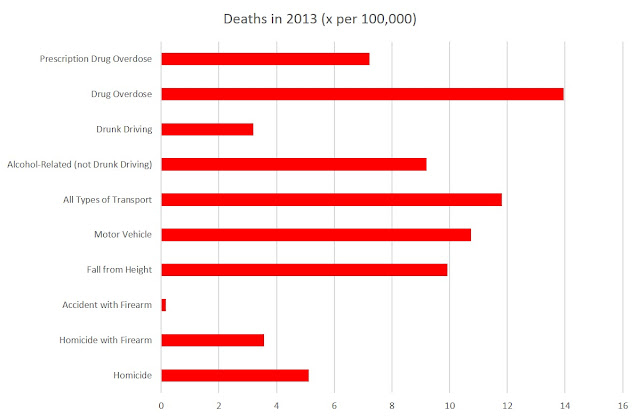 Obviously,  homicides aren't exactly a leading cause of death in the US, and gun homicides, even less so. Accidental death by firearms (0.2 per 100,000) is a small blip.

For all those concerned parents who think little Johnny is likely to get gunned down on the street would be better advised to keep tabs on their prescription painkillers, as Johnny is far more likely to die from popping those than from any gun in your house or in the hands of a school mate.

Moreover, nothing listed here is even in the top ten of causes of death in the US. You're much, much more likely to die from suicide, or "influenza and pneumonia"than anything listed above. 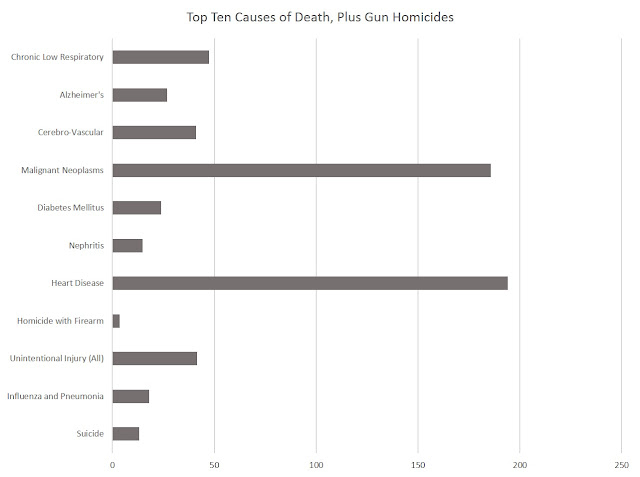 Many people don't fear heart disease like they fear gun violence because they feel they have some control over it, and often judge their risk of an untimely demise by a heart attack to be much lower than it actually is. Simultaneously, they greatly overestimate their chances of dying due to homicide or a gun accident .

On the other hand, one might raise the argument that homicides are different than the other causes of death here because they are intentional, and they affect innocent third parties. That's fair enough, although this claim does not work for drunk driving which affects third-party innocents. The fact that drunk driving deaths occur through negligence rather than malice (usually) is small comfort to the dead and their families.

As a noted recently in this Mises Daily article, alcohol poses far more of a public health risk to society than firearms do, and drunk-driving deaths (10,076) are similar in number to gun homicides (11,208). And yet, the response to drunk driving (which results in the deaths of innocents due to the actions of another) is nothing like the response to gun violence. The proper response to drunk driving, we are told, is to target the crime of careless driving, and to focus most especially on those who have been known to use automobiles carelessly. Those who have a history of abuse are barred from engaging in further risky behavior. Everyone else is free to purchase alcohol in enormous amounts, until proven guilty of an alcohol-related crime.

The response to gun homicides, on the other hand, is to restrict access to guns for everyone without any due process first.

If policymakers responded to drunk driving the way they respond to gun violence, we would be forced to endure nationwide bans on fast cars and automobile engines that can exceed speed limits. We would be hearing demands for laws shrinking the overall number of automobiles sold each year. "More cars equal more fatalities! We are awash in cars," we would be told. (We do hear about this for environmentalist reasons, though.)

But the fact of the matter is that gun violence is simply not a leading cause of death in the US, and those things that are more likely to kill us or our children — such as prescription drugs and alcohol — are approached with caution and demands for a "measured" approach.

Of course, it may not be purely coincidental that the pharmaceutical industry appears to be wealthier and more influential than the gun lobby.