Bloomberg reported last week that worker mobility has returned to pre-recession levels. That is, Americans have returned to the feverish pace of moving out of state last experienced before the economy began to soften ten years ago.

This, we are told, is a good sign for efficiency and economic growth:

Mobility of Americans represents part of the nation’s dynamism, and low migration has concerned economists because it tends to hurt the labor market’s ability to function.

All other things being equal, worker mobility is certainly a positive thing because it means workers can move to where their skills are needed most, benefiting both employer and employee.

However, since workers are not mere economic inputs — but are also human beings with relationships and interests outside their wage-earning activities — there are social costs associated with residential mobility that economists often ignore.

Indeed, residential mobility can be associated with higher levels of stress, crime, poor health, and what sociologists call "social disorganization."

Moreover, the United States is notable for having some of the highest levels of residential mobility among wealthy countries, which may provide insights into a variety of social indicators such as homicide rates, social cohesion, and life expectancy.

The Social Costs of Residential Mobility

In a now-famous 1942 paper, Clifford Shaw and Henry McKay suggested that "social disorganization" arises from three major factors at the urban and neighborhood level: poverty, ethnic homogeneity, and residential instability.

This last factor results from frequently mobile households who move in and out of neighborhoods, contributing to lower levels of social cohesion, and thus higher levels of criminality and other socially-undesirable behaviors.

Later studies by sociologist Robert Sampson have in many ways confirmed Shaw and McKay's earlier theories.

At the core of the theory, Sampson notes, is the idea that neighborhoods with more residential stability facilitate "social ties" that allow for neighbors and residents to more effectively address problems in the neighborhood, with residents taking more ownership of the neighborhood itself and turning to localized self-reliance rather than distantly-administered institutions such as police agencies. For example, according to Sampson:

When residents form local social ties, their capacity for community social control is increased because they are better able to recognize strangers and more apt to engage in guardianship behavior against victimization.

In contrast, when a community is inhabited largely by a highly mobile population, the built-in mechanisms for exerting social control over a neighborhood are less effective.

The effect, Sampson and others find, is one in which members of community are more prone to criminal behavior, and are less likely to engage in mutual self-help through informal relationships.

Criminality is not the only side effect, either.

As one study on Danish residential mobility, it was found that moving to a new residence had significant impacts well beyond the immediate aftermath of the move. The Washington Post reports:

[The researchers] focused on a number of negative outcomes including suicide attempts, criminality, psychiatric disorders, drug abuse, and unnatural mortality. Moving during childhood was linked to increased incidence of all these negative outcomes later in life. Moving multiple times in a single year made long-term harms even more likely...

Nor can we necessarily blame poverty for the negative effects of frequent moves.  While it is true that wealthier residents are more able to deal with high levels of residential instability than are low-income residents, high residential mobility levels tend to increase antisocial behavior across all income levels.

They found that rich kids experienced heightened risks from moving just as much as poor kids, particularly in adolescence. "Residential mobility among older children, even in more-affluent households, may occur in parallel with severe family stressors such as parental separation," they hypothesize.

Moreover, as Becky Pettit notes in a survey of research on residential mobility, "moving frequently during childhood is associated with higher rates of high school dropout and decreased occupational attainment during the early adult years."

Chronic stress may also result from residential mobility which in turn is "associated with poor health and psychological distress in adulthood."

These connections between residential mobility and negative social outcomes may be relevant to understanding and identifying trends in health, educational attainment and criminal behavior across societies.

And, they may be especially significant in analyzing American society given that the residents of the United States tend to be far more mobile than residents of other developed countries.

As the OECD reports, "the percentage of households that changed residence within the last two years" is considerably higher in the United than in most of Western and Eastern Europe. In the case of the United States, this measure stands at more than 20 percent, while it's under ten percent in Spain and Italy, and only slightly above ten percent in Germany. 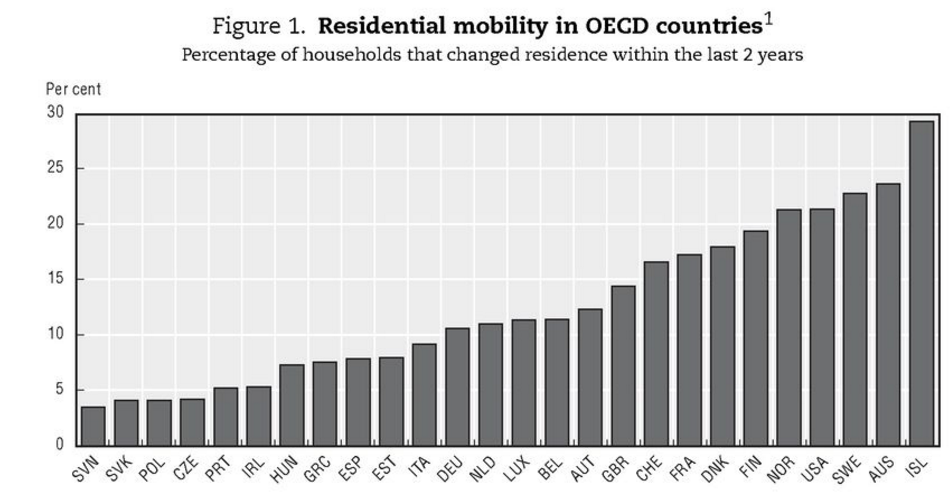 A separate survey by Gallup concluded "the data also confirm commonly held beliefs, including that the U.S. is one of the most mobile countries in the world. About one in four U.S. adults (24%) reported moving within the country in the past five years..."

By contrast, the same measure of European residents showed that only 5 percent to 15 percent of adults reported moving within the country in the past five years. 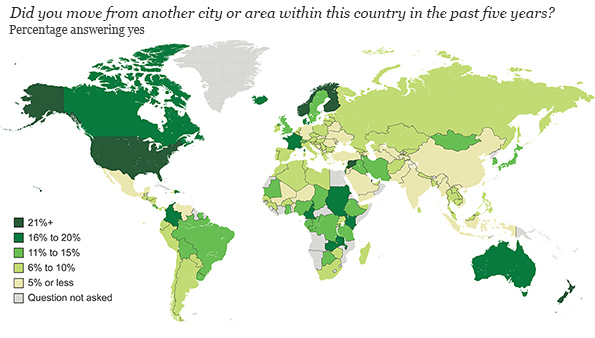 And, as The Atlantic reported last year, "Americans also move considerably more than their European peers...According to data from the U.S. Census Bureau, the average person in the United States moves residences more than 11 times in his or her lifetime. Though hard data is difficult to come by, according to a survey conducted by the real-estate company Re/Max earlier this year, that figure across 16 European countries is roughly four.

In spite of the impacts of the American penchant for high residential mobility, this factor is routinely ignored in public policy discussions. Proponents of gun control, for example, assume that differences in gun control laws are the only relevant factors in any discussion on criminality, conveniently ignoring the significant differences in residential mobility between the US and most European countries — not to mention the other sources of social disorganization such as ethnic diversity and socio-economic status.

Mobility would also appear to be an important factor in analyzing social indicators between US states, such as suicide rates and indicators of physical health, poverty, and education.

And finally, the research on the effects of mobility is a helpful reminder that people are not interchangeable units of labor, but are people who bring with them their own social networks — or lack thereof — which impact the community as a whole and may cause a lack of social cohesion among residents.

But, when economists speak of the benefits of a highly mobile work force, it is important to at least identify some of the hidden costs and limitations on the benefits of mobility at both the societal and household levels.