You Will Find It in Human Action 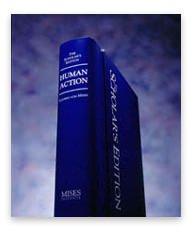 Everyone interested in ideas has surely had the following experience. You become curious about a certain topic. You start with periodicals, read a bit more deeply, become engaged more broadly and start to buy and check out book after book. Pretty soon you have a good-sized library developing. You speak the language. You know the players. You apply the ideas to understanding the world. But there are still gaps, and you dig and dig to fill them.

Then one day you run across something completely different: a book that not only incorporates all that you learned so far, but surpasses them all in breadth and depth. You marvel at how much time and energy you might have saved had you run across this earlier. The mind behind the book is so impressive that it makes all the other authors seem like bit players.

What's more, the author makes available to you something you sought but could never find and didn't even know existed: a rigorously defended theoretical structure that turns scattered bits of knowledge into a bulletproof edifice of thought.

If the topic in question is economics, the book that puts it all together is Human Action by Ludwig von Mises. What is it like to first encounter the book after years of reading in economics? Imagine yourself in a large mansion that is dark but for the nightlights along the wall. You stumble from switch to switch, feeling your way around. Then someone comes along and throws on a switch that illuminates the whole building, inside and out, including the grounds outside. This is what Human Action does.

It has all the features of the best treatises that came before such as J.B. Say's and Frank Fetter's—a thorough explanation that takes the reader step by step—but goes far beyond them all in providing a massive methodological structure that shows how to go about thinking of economics and its relationship to social and natural science. It offers a theory of theory, a theory itself, applications to the real world, and plenty of historical illustration along the way.

It's a wonder that the book exists at all, and you can only stand in awe of the mind that created it. But the marvel is even more poignant when you consider the historical context. Mises had been a famous economist in the early interwar period on the Continent. In 1912, he had written about money and changed the way economists understand the topic.

In 1922, he wrote a book that crushed socialism as a theoretical structure and started a debate that lasted for decades. He had put together a theory of the business cycle that anticipated the cause of and solution to the Great Depression.

There had been other books: one on economic reform after World War I, one on liberalism as a political ideology, and another on interventionism. There were methodological essays and there was a burgeoning seminar that met regularly.

The big theoretical book had not yet appeared and not even Mises's closest associates knew that one was coming. But then tragedy came. Precisely as Mises anticipated, unresolved conflicts left over from the Great War, combined with bad economic policy and a change of ideology, led to the rise of two competing forms of totalitarianism. Mises was the sworn enemy of both, and both menaced the Continent.

Mises had to leave. His seminar broke up. Indeed, the whole intellectual firmament that had created the first generation of Misesians was being destroyed. Mises found a position, a sanctuary, in Geneva, Switzerland, a country that he knew was most likely to maintain neutrality in the coming war. Mises left Austria in 1934 and took up residence at the Graduate Institute of International Studies.

He used his time extraordinarily well. Despite all the horrors developing in Europe and around the world, his grand treatise appeared in 1940. It was called Nationalokoenomie. It was in German. Think of what you know about history, and imagine how well a book on economic science, from a free-market perspective, written in German and published in Geneva, would do if published on the eve of one of history's great calamities. Mises's book died on the date it was published.

Then Mises left Europe and came to the US. He had no money. His papers in Austria were confiscated by the German armies, and his apartment ransacked. He was 60 years old and was starting over in the US. His spoken English was not great. He had no academic position. But he refused to give in. He forged ahead, and his publishing schedule started anew in the US, thanks to a friendly editor at Yale University Press and some other disciples in influential positions.

He was asked by Yale to work on a translation of his 1940 work. What a daunting task! But he got to work. He not only translated it; he expanded it, beefing up the methodological sections, and added inspiring sections on the future of economics. Everyone who has read both Human Action and its German predecessor says that Human Action is even better.

The book was immense: 900 pages. Yale was reluctant to commit to it. Who could believe it would become a publishing sensation? But it did. To read the internal memos among the publisher's staff—they expressed shock and amazement at the sales—is very amusing indeed!

The book became the essential thread that wove together the fabric of free-market economics in the postwar period in the US. Everyone who made a difference later—Murray Rothbard, Ayn Rand, Henry Hazlitt, Hans Sennholz, and hundreds more—had read it and been permanently influenced by it. So large does this book loom in the history of ideas that we cannot even imagine how the structure of ideas would look today without it.

People write often about the postwar emergence of the "conservative movement" (a phrase that I've come to loath). As important as F.A. Hayek, Richard Weaver, Russell Kirk, and all the rest were, it was Mises's book that saved free-market thought in the United States. But it didn't stop there. Mises's book became one for the ages.

Even without knowing any of this history, a student can pick up Mises's book today and experience precisely what generations of readers have experienced: that overwhelming sense of intellectual enlightenment, that sense of having found the missing piece that makes the puzzle of the world suddenly come together.

As anyone who knows the book well can report, the book stands up to two, three, or even a dozen readings. You always find more in it with each time. Over the years at the Mises Institute, we've conducted many reading groups on it. We have taken as little time as one week—students are completely exhausted at the end—and as long as a semester. But it is never enough time. The book is not only a complete economics education on its own; it is a supremely fertile ground for extensions, applications, and advancement in every direction.

What is the main contribution of the book? The establishment of economics as a science of a special sort: one that investigates the logical implications of the fact of action to elucidate fixed laws of cause and effect. This is important because people tend to make two errors regarding economics. They believe it is either not a science because it deals with human beings, or it is a science requiring positivist methods. Neither is tenable but the third option is not generally known, that is, to see the task of economics as discovering, explaining, and applying the economic laws that dictate the limits of the intellectual and political imagination.

I'll not continue with my explanation here. But I would like to say something about the Mises Institute’s Scholars Edition of Human Action. The idea came to us when we first found some writings from the 1940s in which Mises was strongly opposed to conscription. The mystery is that Human Action famously defended conscription. But later investigation revealed that it was only the 1963 and 1966 editions in which Mises added his comments on conscription. We looked for other changes between the original edition and those that appeared much later. Much had been left out and much added.

The changes weren't entirely objectionable, and, in any case, they expressed Mises's attitudes at the height of the Cold War. But regardless of what you think of later editions, these changes were added in the heat of the political moment, whereas the great merit of the 1949 edition is precisely that he wrote a book for the ages in a time of great political upheaval. His book was light, not heat. Clearly, this original needed to be in print, just as anyone would be interested in the first edition of the Wealth of Nations or Say's Principles. There is also the issue of citation: the first edition remains the most cited of any edition. So the Scholars Edition took the first edition, added a marvelous index that had been published separately in 1954, plus a long introduction explaining the differences among all editions. We used the best materials available, and spared no expense on the binding.

One final recommendation. If you are reading for the first time, and do not yet have the patience for detailed methodological argument, you can begin on page 200 and work forward, while saving the material you skipped for the end. This is a profitable approach for many people.

Mises believed that ideas are our best weapon in the struggle for liberty. In this case, Human Action is our nuclear stockpile. It is a preeminent and towering achievement, a nearly miraculous legacy that this great man left the world. I have no doubt that it will continue to be read for many generations, and will someday be widely seen as one of the great achievements of the 20th century.