Woods Tells the Story of the Meltdown 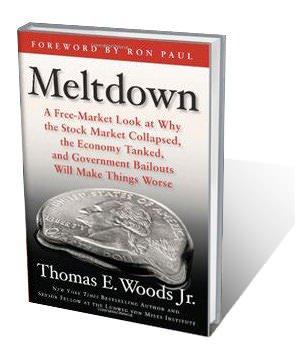 Tom Woods has made an invaluable contribution with his latest book. The public today looks for an explanation of the current economic crisis and a prescription for recovery. Conflicting accounts abound. Should the collapse of the housing bubble and the accompanying credit crunch be met by increased government spending, as Keynesians aver? Does the key to the mystery lie in maintaining an adequate supply of money, as monetarists think? Those of us inclined to the Austrian School know better: such foolish resorts to the government serve only to worsen matters.

Austrian business-cycle theory is straightforward, for those willing to devote the necessary time to study praxeology. But therein lies a problem. The average person lacks the patience to read Human Action and Man, Economy, and State. How then can he acquire the rudiments of Austrian cycle theory and grasp why the theory is true? To set the question aside, on the grounds that it is unnecessary for the man in the street to bother with such matters, is a counsel of despair. If the public does not understand the economics of depression, there is little hope that we can avoid disastrous government policies. Unless the free market receives sufficient popular support, our economic future is bleak.

Woods supplies just what we need. With great clarity, he shows that the Austrian theory of the cycle is firmly grounded in common sense. Additionally — and here his skill as a trained historian comes to the fore — he shows that Austrian theory explains not only the Great Depression but other less-well-known economic downturns as well. When the government followed a "hands-off" policy, recovery from a downturn was rapid; when, as most notably was the case in the New Deal, government tried to take control, the economy sputtered.

The basics of Austrian cycle theory fall readily into place once one considers a fundamental point: the economy can grow only by producing more goods. An expansion of the money supply does not suffice. Efforts to get something for nothing, by the government's deficit spending or by an expansion of the money supply, cannot produce lasting prosperity.

The speed with which an economy grows depends on the extent to which people prefer present goods to future goods. Other things being equal, people always prefer satisfaction in the present; but the extent to which this preference prevails is crucial for economic development. In order to obtain more consumer goods than are immediately available, people must postpone satisfaction by saving, enabling a greater production of capital goods to occur.

Look at it from the saver's perspective. Saving more indicates a relatively lower desire to consume in the present. This is another incentive for businesses to invest in the future, to carry out time-consuming investment projects with an eye to future production, rather than produce and sell things now. (p. 67)

The extent that they are willing to do so determines the rate of economic growth.

The preference people have for the present forms the main part of the rate of interest: Mises called this the originary rate of interest. This rate registers the way people allocate resources between consumption and production.

Trouble arises when the government, by increasing the supply of bank credit, depresses the money rate of interest below the natural rate. Businessmen, seeing that money is available, invest in capital-goods industries, and the result is a boom.

Once the monetary expansion stops, the boom cannot be sustained. The entrepreneurs who expanded their production of capital goods need more money to sustain their projects, but not enough is available at an interest rate that will secure for them a positive return. In the absence of monetary expansion, the rate of interest rises, since time preference has not changed (or at least there is no reason to assume it has.)1 At the higher rate of interest that now prevails, formerly profitable enterprises now have to be liquidated. This process of liquidation is precisely the depression.

We can see the underlying mechanism more clearly if we do not think in terms of money at all. For production to increase, real resources must be transferred from consumption to production goods. But consumers are unwilling to make such transfers, except in accord with their rate of time preference. Projects initiated that would be sustainable only if the rate of time preference were lower than it in fact is must fail.

When the public realizes that the monetary authority intends to continue inflating the money supply and thus reducing its value, they scramble to unload their currency before it can lose any more purchasing power. In what is called the "flight into real values," consumers seek to abandon their currency at all costs, exchanging it for whatever goods they can find. (pp. 123–24)

The Austrian theory, in sum, holds that economic growth requires decisions of people to increase the real resources they devote to production. Fiddling with spending or the monetary system is futile. The essence of Keynesianism is to reject this. Keynes thought that boom conditions could be permanently maintained: in his plan, the rate of interest would be reduced almost to zero.

The remedy for the boom is not a higher rate of interest but a lower rate of interest! For that may enable the so-called boom to last. The right remedy for the trade cycle is not to be found in abolishing booms and thus keeping us permanently in a semi-slump; but in abolishing slumps and keeping us permanently in a quasi-boom. (p. 70, quoting Keynes)

The Austrian theory gives a plausible mechanism to account for the business cycle, but why should we think that it applies to our present crisis? As Woods points out, the Federal Reserve System under Alan Greenspan followed exactly the expansionary course that the theory identifies as the cause of the cycle. Greenspan's reckless policies reduced the rate of interest to such low levels that a boom and an ensuing crash were virtually inevitable.

One might object that particular events suffice to explain the present crisis, without resort to a general theory. The collapse of the housing boom would have been bad enough by itself. Owing to complex bundling of mortgages, though, the real estate collapse brought down with it a good many banks as well. Why need we go further than these particular circumstances to explain the crisis?

Woods ably responds to this challenge. The housing boom could not have attained the level it did, had there not been an expansion of credit. An analysis of the crisis needs to go deeper than such matters as laws that made it easier for unreliable borrowers to obtain credit for homes. The underlying cause, the expansion of bank credit, must receive proper stress. It does not follow from this, though, that Woods neglects the secondary causes of the crisis or exonerates bankers and realtors from charges of reckless behavior. Rather, as a good historian should, Woods distinguishes between the relevant levels of causation involved.2

If the Austrian account of our current plight is correct, what should we do now? Woods offers a simple answer that is essential for the public to understand. The government should do nothing. Malinvestments have occurred and must come to an end. The attempt to shore up these failed businesses by bailouts and other subventions will result only in a renewed artificial boom, along with an ensuing crisis.

Woods goes further. The government must exit totally from its control of the money supply. Under the classic gold standard, money functions strictly as a commodity and the government plays no role in its regulation. Under this monetary regime, there is no role for the Federal Reserve System, which should accordingly be abolished. But would the supply of money under a strict gold standard prove adequate? Wood responds that, contrary to common opinion, a growing economy does not require a greater supply of money.

Since any supply of money is optimal above a certain threshold, the existing supply of gold or silver, combined with whatever additional quantities might be mined in the future, can indeed facilitate all transactions. (p. 132)

Some economists have alleged that the gold standard suffers from theoretical deficiencies: does it not, e.g., waste resources on extraction of the monetary metal, in comparison with a paper standard? Woods ably shows that these arguments do not succeed; and even if they did, the advantage of removing the government from the money supply that the gold standard offers is far more important. Woods quotes Schumpeter to good effect on this point.3 The gold standard, said Schumpeter,

imposes restrictions upon governments or bureaucracies that are much more powerful than parliamentary criticism. It is both the badge and the guarantee of bourgeois freedom. (p. 116)

People unfamiliar with Austrian theory may hesitate to embrace a program so radically at variance with current opinion, but Woods deploys numerous historical examples to illustrate the wisdom of a free-market policy. One comparison he makes strikes me as especially convincing. He contrasts the rapid recovery of the economy following the 1920–1921 depression, when the government adopted a "hands-off" policy, with the disastrous stagnation of the economy in the 1930s, during Roosevelt's New Deal.

By the middle of 1920 the downturn in production had become severe, falling by 21 percent over the following twelve months. Conditions were worse than they would be in 1930, after the first year of the Great Depression. Yet scarcely any American even knows that such a slowdown occurred. That's probably because, compared to the Great Depression of the 1930s, it was so short lived … the market was allowed to make the necessary corrections, and in no time the economy was back setting production records again. (p. 94)

As Ron Paul notes in his foreword, this book has great potential to do good.

In a short span, Tom introduces the layman to a range of subjects that have been excluded from our national discussion for much too long… This book is an indispensable conduit of these critical ideas. (p. x)