The Wisdom of Grover Cleveland 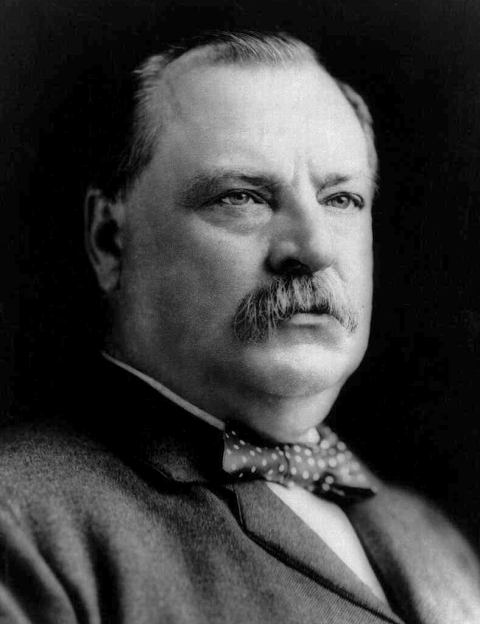 I can remember when, many years ago, my father saw his first episode of "All in the Family."  As Edith's theme song reached the verse that said "Mister, we could use a man like Herbert Hoover again," he bolted up from his easy chair, pointed at the TV set, and yelled "We could not."

Unfortunately, my father's Depression-inspired reaction would remain an appropriate response if Hoover's name was replaced with many of America's presidents.  However, one too-little studied President who took his pledge "to uphold and defend the Constitution of the United States" seriously was Grover Cleveland.

Grover Cleveland was unique in many ways. He was the only President to serve two non-consecutive terms as President (while winning the popular vote in three consecutive elections); to be elected when single and marry in the White House; to have a candy bar named after his daughter (Baby Ruth); or (endearing him to me) to have won a governorship (New York) without ever making a campaign speech.

More important than the Trivial Pursuit aspects of Grover Cleveland's Presidencies, however, was his fight to live up to his oath of office, respecting both the intent of the General Welfare clause and the Constitution's bounds on government power.

He fought to restore honesty and impartiality to government, particularly by eliminating government favors.  He tried, though unsuccessfully, to eliminate protective tariffs (he even devoted his entire annual message to Congress one year to attacking high protective tariffs).

He resisted political pressures to inflate, even in the face of a serious recession.  He was the first president to veto bogus pension claims and pension pork (from the Civil War).  Further, he was known as a veto President, who studied every bill Congress passed and vetoed more than 300 of them—more than twice as many than the 132 vetoes cast by all the Presidents before him.

Fortunately, Grover Cleveland did leave us the valuable legacy of his words, particularly those dealing with the limited federal role under the Constitution, taxation, and waste in government.  In the aftermath of an election with more than the usual share of political chicanery, it worth remembering what a President for whom "honest politician" was not an oxymoron had to say:

Grover Cleveland's last words were "I have tried so hard to do right."  But unlike so many today, he checked his desire to do good through the government.  He did so because of a deep respect for the Constitution and the limitations it imposed on the legitimate activities of government, an attitude that many today view as archaic.  But he also did so because he had the wisdom to know the answer to his self-reflection that "I am honest and sincere in my desire to do well, but the question is whether I know enough to accomplish what I desire."  That answer was "no."  We would do well to remember that answer, and the dangers of a government that ignores it.

It is perhaps fitting that Grover Cleveland had the honor of dedicating the Statue of Liberty, because he was a President who truly tried to live up to that dedication: "We will not forget that Liberty has made her home here, nor shall her chosen altar be neglected...A stream of light shall pierce the darkness of ignorance and man's oppression until Liberty enlightens the world."  We could certainly use a man like Grover Cleveland again.