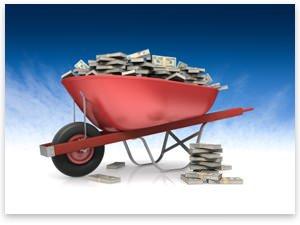 Recently, Ben Bernanke indicated that Quantitative Easing II (QE2) might be followed by QE3, etc. In an interview at the beginning of December, Bernanke was asked, "Do you anticipate a scenario in which you would commit to more than $600 billion?"

Bernanke's answer was startling. "Oh, it's certainly possible," he said. "And again, it depends on the efficacy of the program. It depends on inflation. And finally it depends on how the economy looks."

The answer is interesting because it not only indicates the possibility that the Federal Reserve (Fed) will purchase more government bonds but also implies that Bernanke thinks that inflation and QE are different concepts, because otherwise his claim would be a meaningless tautology: more inflation depends on inflation.

To make sense of Bernanke's technical talk, let us go back to the beginning of the infamous QE, to the darkest months of the financial crisis. During the boom fired by artificially low interest rates, financial institutions had financed malinvestments, especially in the housing sector. When the bubble burst and housing prices started to fall, these investments lost value rapidly. Bank losses mounted, bank equity fell, and solvency problems arose. Liquidity dried up as financial institutions started to doubt each other's solvency given the problematic loans on their books.

When credit markets dried up in September 2008, after the collapse of Lehman Brothers, loans that financed malinvestments did not serve as collateral for interbank lending anymore. The Fed stepped into the breach and accepted these bad assets as collateral for loans. In March 2009, the Fed started to buy these assets outright in what was dubbed QE1. As a consequence of this qualitative and quantitative easing, the Fed's balance sheet almost tripled within a few months.1

How long would these extraordinary emergency measures be maintained? In March 2009, Ben Bernanke stated that the Fed had an exit strategy from its emergency credit policies. It could simply undo its credit policies and asset purchases, thereby reducing the size of its balance sheet to its precrisis level.

I have argued that such an easy exit option does not exist. The Fed's purchase of problematic assets did not solve the underlying real problems in the economy: injecting new money does not cause malinvestments to go away. By propping up financial institutions, necessary liquidations and readjustments of the structure of production are only delayed. QE1 could even cause more malinvestments and thereby aggravate the problem. The consequence could be a Japanization of the banking system, with insolvent banks held afloat by the central bank.

If the Fed would exit the emergency situation, reduce its balance sheet, and stop accepting problematic assets as collateral for loans, financial institutions would be back to the initial situation of September 2008. If housing prices do not return to their bubble level, many of the problematic assets will continue to be bad and not serve as good collateral. If valued at the market price, these assets might eat up banks' equity. If the Fed ended its emergency measures, we would effectively be back to the initial situation of frozen interbank markets and general illiquidity.

In October 2009, I concluded that the Fed could not go back to its initial balance sheet without causing the collapse of the financial system. One possible way out would be to reinflate the bubble. Rising asset prices — and especially housing prices — would make many problematic bank assets valuable again. The Fed could increase the quality of its assets by inflating the housing bubble.

In the winter of 2010, no one is talking about reducing the Fed's balance sheet or about exit strategies anymore. On the contrary, the Fed has chosen the path of more inflation and dubbed this strategy "QE2."

The inflationary policies of the Fed have been coupled with the Keynesian fiscal policies of the US government. The US government engaged in deficit spending to bail out financial institutions and automakers, disrupting a fast liquidation of malinvestments and a smooth adaption of the structure of production to consumer wants.

Of course, Ben Bernanke does not say that he wants to help finance the government's deficit via money creation. The official excuse for QE2 is, yet again, the scapegoat "deflation."2 Price inflation is too low. James Bullard, president of the St. Louis Federal Reserve Bank, states that "it's important to defend inflation from the low side as we would on the high side."

In other words, if prices rise too slowly, we must print money so that things get more expensive faster. Bernanke even denies that QE2 would be inflationary: "One myth that's out there is that what we're doing is printing money. … The money supply is not changing in any significant way."

Bernanke plays a semantic trick in this statement. Of course, the Fed does not create the bulk of its new money by literally "printing." Rather, the Fed creates money by manipulating digits in its computer. When the Fed buys a $1,000 government bond from a bank, it transfers 1,000 new dollars as a payment to the bank. It is true that the Fed does not print the money and ship it over to the bank physically. Rather, it increases the account that the bank holds at the Fed by $1,000. It is more convenient to just create the new money in a computer.

However, the fact that the new money is created electronically does not mean that QE2 is not inflationary. QE2 is inflationary in several ways:

"In other words, if prices rise too slowly, we must print money so that things get more expensive faster."

Third, prices will be higher than they would have been otherwise. Prices would probably have fallen substantially without QE1 and QE2. The injection of new bank reserves inhibited a credit contraction and falling prices. In fact, one aim of QE2 is to bid up asset prices.

Money flows into the stock market, bidding up stock prices. In March 2009, when QE1 started, the Dow Jones was below 7,000 and rose to 10,800 until QE1 expired. When the Dow fell below 10,000 again, markets began to speculate about the possibility of QE2, and a new rally started.

Fourth, the exchange rate will be lower than it would have been otherwise. Market participants will value the dollar lower, given that the base-money supply increases and the dollar's quality decreases. This devaluation is another aim of QE2. It is a way to give exporters an advantage. The devaluation is not as crude an instrument as a tariff but has similar effects. It makes consumers poorer. They have to pay higher prices for imported goods.

Consequently, QE2 is, despite Bernanke's words, inflationary. In fact, it is a euphemism to call the policy QE2. The term quantitative easing conceals the true inflationary nature of the instrument. Furthermore, it sounds technical. The added number "2" makes it even more so. People who know little about economics might ignore news on QE2. Why bother to understand something so technical — let the experts deal with it. The term also has a positive connotation. Who does not want "ease"?

As Walter Block has repeatedly pointed out, we should carefully watch our language. Language is crucial to clear communication. The use of the term quantitative easing generates a smog to hide the production of new money. Words, as Block states, can be mightier than pens or swords. They guide our thoughts and writings. The invention of the term quantitative easing prevents people from thinking about the consequences of inflation. The term distorts thinking.

"The term quantitative easing conceals the true inflationary nature of the instrument."

Money printing cannot make society richer; it does not produce more real goods. It has a redistributive effect in favor of those who receive the new money first and to the detriment of those who receive it last. The money injection in a specific part of the economy distorts production. Thus, QE does not bring ease to the economy. To the contrary, QE makes the recession longer and harsher.

The injection of new money into the economy reinflates old bubbles and generates new ones. Most importantly, QE facilitates government deficit spending — additional distortions and rigidities in the economy. Malinvestments can endure. Factors of production are not shifted to places where the consumer wants them to be most urgently.

Or we might name it after the intentions behind it: "Currency Debasement I," "Bank Bailout I," "Government Bailout II," or simply "Consumer Impoverishment." Finally, we might also name it after its essence: "Money Printing I and II." Or, if we follow Bernanke, who pointed out that most of the new money is created in a computer, we can call it "Money Creation I and II." This might be the most neutral term.

The rhetorical tricks should not distract us from the fact that QE is simple money creation. The aim of Money Creation II is to finance government spending, debasing the dollar. We should dismiss the term QE and instead call money creation what it is: inflation.