Who Was Gottfried Dietze? | Mises Institute
Skip to main content

GET NEWS AND ARTICLES IN YOUR INBOXPrint
A
A
Home | Mises Library | Who Was Gottfried Dietze?

Who Was Gottfried Dietze? 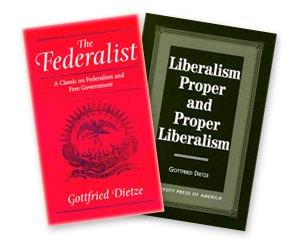 Gottfried Dietze died a few weeks ago after teaching for 50 years at Johns Hopkins University. Most of his work was focused on the rule of law, separation of power, judicial review, and property rights. He is the author of a classic study of the Federalist papers.

Gottfried Dietze was born in Germany, in Prussia, in the early 1920s. Born just after World War I, Dietze witnessed the collapse of the Weimar republic, Hitler's rise to power, World War II, and the tragedy of the Holocaust.

After the war he was awarded a scholarship to enroll in the PhD program at Harvard, which he left after a year to move to Princeton University where he eventually received his PhD for a dissertation which later became The Federalist — Dietze's most influential scholarly work.

The Federalist was extremely well received when it was first published. Fairfield, in a review appearing in the Journal of Politics, praised Dietze for his lucidity and praised the book for its "symmetry,  precision, and profundity" (1961:152). Later in 1961 Scalan reviewed Dietze's book for the Review of Politics and, in addition to praising the book for its scholarly merits, added that "his conclusions here, confessedly "undemocratic," "unpopular," and even "pessimistic," should be read by everyone interested in the future of constitutional democracy in the United States" (1961:431). Forty years after its publication, and after seven successful printings, Dietze's work is still widely read, discussed, and cited.

The reception of Dietze's other books was mixed. His Ueber die Formulierung der Menchsrechte (1956) – the title could be translated as "Concerning the Formulation of Human Rights" — or his Two Concepts of the Rule of Law (1973) received glorious reviews. Other works, such as In Defense of Property (1963) Youth, University, and Democracy (1970) or Liberalism Proper and Proper Liberalism (1987), were less enthusiastically received, if not openly criticized, for their conservative leaning.

But Dietze was not a conservative; he was rather an old liberal, or — to use the expression that Montanelli had coined for Prezzolini — an anarcho-conservative.

In his essay "State Justice and the Just State," published in his Two Concepts of the Rule of Law, Dietze argued that one of the main problems of liberal democracy is "the improper permissiveness that drifts toward anarchy under the pluralistic government of an atomized society in which everybody can behave and misbehave according to the principle, tel est mon plaisir" (p. 54). This is not what a liberal democratic order should be.

For Dietze, in a properly understood liberal democratic order, the positive freedoms of the individual and the power of the state should both be constrained by the (rule of) law. The law is what protects negative freedom of an individual from being abused by either the state or by fellow individuals. For Dietze the (rule of) law was the single most important element of a liberal democratic order and, not surprisingly the rule of law is one the topics to which Dietze has devoted most of his scholarly attention.

Contra Kelsen and jus-positivists, who had argued that what makes laws just is the fact that laws are laws, and that whatever law the state makes is a state law and should, as such, be obeyed, Dietze argued that the formalism of jus-positivism created the condition for any kind of dictatorial rule and violation of individual rights.

Hence, in underlining the importance of the rule of law for the existence and the survival of a liberal democratic order, Dietze emphasized the jus-naturalistic conception of the law. This means that in the rule of law, what matters is not simply whether a law has been formally enacted or not but whether this law is just.

The English expression "rule of law" corresponds to the German expression Rechtsstaat. In German, the word Recht does not simply correspond to the word "law" (which is legis in Latin) but also to the word "right" (which is jus in Latin). If we put the pieces together, we can now understand what Rechtstaat means for Dietze: the rule of the right/just law.

Dietze's commitment to the just law and his aversion to legal formalism is not surprising. Dietze grew up in the Weimar Republic first and under Hitler's regime later. He must have been about 10 years old when Hitler took power.

Kelsen's formalism justifies Hitler's rule, decisions, and actions. As long as Hitler was in power, and the laws were enacted as law of the state, the state was a state characterized by the rule of law, and it was a state of law. But for Dietze it was always very clear that Hitler's rule had nothing to do with the Rechtsstaat as Hitler's laws were neither right nor just. Hence, his regime was not characterized by the rule of just law and could not be considered a state of right (stato di diritto).

Dietze spent fifty years teaching at Johns Hopkins University, trying to explain to his students why laws must be just, why negative freedom must be protected, why positive freedom may at times have to be restrained, why the judicial review represents a protection against the abuse of power and unjust laws, and why it is an integral part of the rule of law.

Dietze enjoyed his time at Hopkins in spite of the fact that he was quite isolated both in human and intellectual terms. He told me once he had been offered a full professorship in Berlin, Germany. "Why didn't you take it?" I asked him. "Because here I am an emperor," he said, and before I could say anything he added, "Nowhere I would have been as free as I have been here."

With his passing, some of us lost a professor, others a colleague, and others a friend. But we all lost a free man.

Two Concepts of the Rule of Law, Indianapolis, Liberty Fund, 1973.