GET NEWS AND ARTICLES IN YOUR INBOXPrint
A
A
Home | Mises Library | What Is Terror? 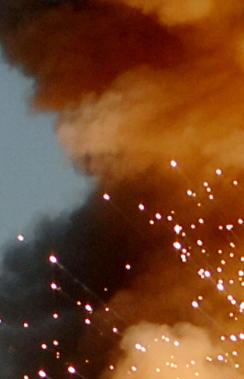 You arrive home to discover you've been burglarized. In retaliation, you "strike back" by randomly spraying machine-gun fire up and down the street, killing passers-by and destroying a medical clinic. An irresponsible act? Terrorism, perhaps? After its bombing raids in Sudan and Afghanistan, the U.S. stands roughly in the position of this burglarized homeowner.

Nobody doubts that the U.S. suffered an injustice when its embassies were bombed in Africa. But the question being asked around the world is whether the U.S. itself is now guilty of terrorism, by definition if not intention.

The target of U.S. bombs in the capital city of Sudan, dropped without Congressional approval or even notification, was a pharmaceutical plant that now lies in rubble, suffering $100 million in damage. The Clinton administration claimed to have physical evidence that the secret and heavily guarded plant was linked with the production of chemical weapons.

How close is the link? Here, the Clinton administration, famous for rhetorical dodges, chose its words carefully. Sandy Berger, the National Security Adviser and frontman on this issue, said El Shifa Pharmaceutical Industries in Khartoum was making a chemical that is a necessary "precursor" to nerve gas.

"There is no question in my mind," Berger said, "that the factory was used to create a chemical that was used in the manufacture of VX nerve gas. We have physical evidence of that fact...but we are not going to release it." In fact, he said, Osama bin Laden, the global bad guy of the moment, might have nudged the factory into making it. We were to accept these claims as gospel. Doubt was unpatriotic. Nonetheless, doubt arose immediately.

It turns out that El Shifa was not a secret installation. It was a private, for-profit plant located in an industrial zone surrounded by residential districts. It made 30 kinds of human drugs and 23 veterinary medicines, and employed 360 people. Owned by Saleh Idriss, a Sudanese entrepreneur, it was one of Africa's largest factories, and one of the most important sources for medicines in Africa and the Arab world.

The Sudanese government invited journalists to examine the bombed site. Everyone who did noted that the area was strewn with antibiotics, anti-malaria pills for children, veterinary medicines of all sorts. But no weapons, no gas, and no "precursors" to gas.

The U.S. then began to subtly backpedal, granting that, yes, the plant did make regular medicines, but it had a side business in weapons of mass destruction. Okay, said Sudan, let's invite the United Nations to send independent inspectors to run their own tests. The U.S. balked, claiming, a bit too emphatically, that this would be wholly unnecessary.

Still, where's the evidence? British engineer Tom Carnaffin worked as technical manager for the plant between 1992 and 1996. He told the Los Angeles Times: "I have intimate knowledge of that factory and it just does not lend itself to the manufacture of chemical weapons." And a British filmmaker who visited the plant to make a documentary told the paper, "I was allowed to wander about quite freely. This is a perfectly normal chemical factory."

It also turns out that El Shifa was on contract to deliver $200,000 in veterinary pharmaceuticals to Iraq under the UN's oil-for-food program. Might the U.S., which has sworn eternal enmity with Iraq, not have wanted those medicines to cross the border? Might that be a factor in why this apparently civilian target was picked in the first place?

Faced with a growing public-relations disaster, the administration was forced to explain itself further. The "precursor" chemical, said a spokesman, was found in the dirt outside the plant. It's name is EMPTA, and it has no other use than to make VX chemical nerve gas.

But, it turns out, that's not true either. The group that enforces the chemical weapons treaty said that EMPTA could in fact be used "in limited quantities for legitimate commercial purposes." What purposes? Fungicides and anti-microbial agents. Mobil Corp. and other chemical companies do research with EMPTA.

And there's another possibility, reported on by the New York Times. EMPTA is easily confused in the lab with FONFOS, a common agricultural insecticide found all over Africa.

The bottom line is this: no one in the world, other than people on the U.S. payroll, has provided support for the U.S. rationale for the bombing. And no one has provided a shred of evidence to back up the administration's claims about this plant.

Because the plant was reduced to rubble, children all over Africa and the Arab world will die, people will go without food, and disease will be more rampant. Iraq, already reeling from a horrific boycott, will not get its much-needed medicines. In addition, the strikes killed 21 people, wounded 50, and left unexploded bombs as far as 300 miles from the intended targets.

This is "the unfortunate war of the future," said Madeleine Albright.