GET NEWS AND ARTICLES IN YOUR INBOXPrint
A
A
Home | Mises Library | What Has Austrian Economics to Do with Literature?

What Has Austrian Economics to Do with Literature? 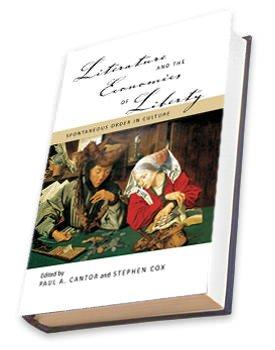 Paul Cantor clears up the mystery in his introductory chapter. The dominant approach to literary criticism for much of the twentieth century was the New Criticism; Cleanth Brooks and W.K. Wimsatt, two of its leading exponents, were revered names in American English departments. This approach isolated literary texts: a text was a "verbal icon," in Wimsatt's phrase, to be studied apart from surmises about the psychological state of the author. To think otherwise was to fall victim to the dreaded "intentional fallacy." The text was viewed as an ordered harmony, and the critic's job was to tease out every nuance of meaning that it contained. The method was ideally suited to the lyric poem, in which every word served a perfectly designed purpose; but it faced difficulties when applied to longer works

Precisely because the New Critics believed that every detail in a work of literature has to have a function, whenever some detail seemed extraneous or purposeless, they searched and searched until they found a reason for it. (p. 25)

Beginning in the 1960s, a reaction against the New Criticism set in. Many writers in "cultural studies," as well as New Historicists such as Stephen Greenblatt, sought to study writers in their historical and economic background. The new emphasis was all to the good, but unfortunately, the economic assumptions of virtually all of those interested in the topic were Marxist.

Cantor and the other writers who have contributed to the present collection ask a penetrating question: if one proposes to use social background to illumine literary works, why not use correct economic theory in doing so? And correct economics, in the view of Cantor and his collaborators, is primarily Austrian economics.

Here is where the Austrian School can come to the aid of critics who are interested in the relation of literature and economics but are troubled by the reductionist implications of Marxism for the study of artistic creativity.… The relation between literature and economics looks very different when one works from a form of economics, like the Austrian School, that celebrates freedom and the individual, rather than determinism and the collective. (p. 18)

An excellent example of the benefits of such an economically informed approach is Cantor's essay on Shelley's economic views. Cantor argues that Shelley, far from being a radical socialist and opponent of capitalism, was in fact a firm defender of economic freedom. Shelley's critical remarks were aimed at inflation and bank-manipulated credit, which he viewed along the lines of Austrian business-cycle theory.1

Shelley understood the great magic trick the British government had managed to pull off in the course of the eighteenth century. It used the Bank of England and the money market institutions that grew up along with it to finance its increasing debts, and then monetized the debt, thereby performing the seeming miracle of turning debt into wealth.… Shelley finally begins to talk about the horrors of working conditions in early nineteenth-century England, but contrary to conventional opinion about the economic attitudes of the Romantics, he attributes the problems not to the Industrial Revolution but to the financial policies of the British government and specifically to its suspension of gold and silver convertibility. (pp. 232–33, 238)

Shelley supported freedom of trade and opposed high taxes, in a way that contemporary libertarians would find entirely congenial.

Although monetary issues figure elsewhere in the book, e.g., in Cantor's essay on Thomas Mann's short story "Disorder and Early Sorrow" and in Dário Fernández-Morera's "Cervantes and Economic Theory," the dominant theme of the book lies elsewhere, in the notion of spontaneous order.3

the great contribution of economics to thought in general has been a way of conceiving order that need not be imposed above on phenomena but can grow up out of them, an order generated by the phenomena themselves. (p. 22)

Here I should like to note an ambiguity in the concept of spontaneous order. On the one hand, as in the quotation just given, it may designate the way in which an order has arisen: no one mind has planned it, but it results from particular actions that have other immediate aims. On the other hand, spontaneous order may be used to refer to the likely results of an undesigned process. Although these results will of course be ordered, they will often display a different sort of arrangement from a designed order. In particular, it will have some "loose ends" and not display the tight unity of a perfectly planned creation. Often, but not always, it is not contradictory to suppose an unplanned process that culminates, e.g., in just the sort of detailed unity that the New Critics prized.

In Thomas Peyser's excellent "Capitalist Vistas: Walt Whitman and Spontaneous Order," both of the two meanings of spontaneous order just distinguished play a role. He writes,

To understand [Whitman's] Song of Myself (or any other text) as an attempt to translate, as it were the form of a spontaneous order into the language of a literary work, one need not therefore demand that it display spontaneity of every kind at every moment. What is required is that the poem be seen as a compilation of discrete textual units that, while displaying ample signs of organization within themselves, are juxtaposed in a way that defies the strictures of rhetorical cohesion. (p. 287)

I should be inclined to say that this is a sufficient, but not necessary condition, for a literary work to mirror a spontaneous order. Another way would be to allow spontaneous elements into the process of composition, rather than its product.

Chandran Kukathas makes use of a similar view of spontaneous order to Peyser's in his essay on the Nigerian writer Ben Okri, who has, he tells us, a "startlingly Austrian" vision of the world.

The world is the product not of justice or of beneficent design, but of human limitations. Out of ignorance, and in the chaos of conflict, the world is built and rebuilt. (p. 494)

The book contains an abundance of insightful discussions: Stephen Cox has essays on Willa Cather and Joseph Conrad; Paul Cantor ranges widely over Mrs. Gaskell, Ben Jonson, and H.G. Wells; and Dário Fernández-Morera shows that Cervantes anticipated key elements of Austrian economics. The book is a major contribution to literary studies. Although all the contributors deserve praise, Paul Cantor merits special recognition. His essays fill about half the volume; and they display the remarkable scope and erudition of this outstanding scholar.