The Welfare State's Attack on the Family 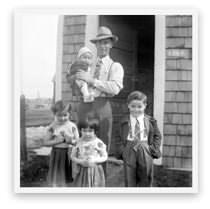 Most people listening to libertarian ideas are thrown off by the thought that private charity, in absence of government programs, will handle problems involving truly helpless people. Charitable organizations are active but no one knows for sure how much donations would increase in a tax-free society.

When a person becomes old without savings, what is he or she supposed to do without socialist programs such as Social Security? The forgotten institution of  charity here is the family. When libertarians talk of charity, we don't just mean the Salvation Army, but taking care of your relatives as well.

When my brother and I were babies, my grandparents stepped in to take care of us while my mother and father worked. My parents in turn provided for the whole household living under one roof to save money. When my father moved to the United States and made more money, he made sure that my grandparents would be taken care of.

During the Balkan War, members of my family were forcefully removed and became refugees due to the conflict. When they lost everything, guess who took care of them? The whole family together sent money and whatever supplies that they could.

So was the rule everywhere before the welfare state: your parents who took care of you financially as a child — you may need to help them in the future. This basic element of family life seems to be mind-boggling to supporters of the welfare state. Proponents of the welfare state constantly speak about our responsibility to society through redistributionist taxes.

I have no responsibility to society as a whole, to some stranger I've never met. I personally feel that I do have a responsibility toward my immediate family. Programs like TANF ("Temporary Assistance for Needy Families"), Social Security, and unemployment insurance take away our responsibility to the family and place it in the hands of the state. They crowd out our sense of moral responsibility.

Family was an integral way of caring for individuals as a whole for centuries. Supporters of the welfare state forget the past.

Before the advent of Social Security, what happened to people who lived past 65 years? Did these people just starve to death from hunger by the tens of thousands? No. Did a huge wave of charitable organizations come to their rescue? Not always. So, how did they survive? Everyone can agree that there were no mass deaths of 65-year-old people recorded in the Great Depression before Social Security took effect.

This created many incentives that produced a healthy family. For one thing, you had to be somewhat nicer to your children and make sure that you instilled good values. Children without a good work ethic or good values are not likely to perform well in the job market. A parent would have to teach these values to children to insure his or her own needs at a later time. Responsibility to the family ranked highly. Without this ingrained in a child, he or she might grow up one day and never return the nurturing given by parents early in life.

With government attempting to smooth over every mistake in life, we get very different incentives. If your parents are entirely subsidized on welfare, how much do they really care about your future? Parents usually care for their children and want the best for them. But parents who know that they either raise their child right or don't eat in the future will try much times harder to make sure their child stays away from drugs, crime, and other bad decisions.

The standard abortion excuses also play a major role in the issue. The welfare state has destroyed the culture of hard work and family. I cringe every time I hear someone talk about poverty as an excuse for abortion.

I don't want to discuss here the rights and wrongs of abortion, but how can you make an excuse that you are too poor to have a child and you have to abort? During much harder economic times, families were having ten or twelve children. Huge families were not uncommon. Today, these abortionists want me to believe that with economic conditions a hundred times better than before, they can't afford to have a child. They're going to have to do better than that.

It's not easy to have a child whether you are rich or poor. At any point in life a baby is difficult to raise and deal with. Even with a college degree, a young mother will have just as much difficulty as a teenager. These are facts of life. Raising children is hard work! The welfare state has reinforced the idea that if anything is hard, it must be wrong.

Doing the right thing is not easy. Difficulty does not justify immoral actions. Sure, taking care of your elderly parents is harder on you than having the state do it. But is it your moral responsibility? Yes. It is not the responsibility of some other taxpayer who does not even know your parents. Anyone who would leave it to strangers to care for their elderly parents should be ashamed.

Before the welfare state, there existed incentives to have children and insure your own future. Now, we have incentives to break the family apart. TANF actually gives more money to single moms. This may seem like a great program to help single mothers in need, but in reality, the program makes it easier for the man in the family to leave. It reduces the man's practical responsibility to stay and raise the child. The program creates more single mothers!

And some day, it will be the government, not his offspring, who will provide for the man who left. This brings even fewer incentives to raise kids properly.

Unemployment insurance has also undermined society. During the Great Depression, there were great movements of people to find jobs. If there was a job somewhere, people went. Now, with unemployment and welfare people stay in the same city watching everything around them rot and decay. Government housing keeps them complacent as they beg for yet more assistance. When times get tough, people will move to get jobs. The Great Depression has already proved this. Did millions die without welfare or unemployment insurance? No. Does it improve people's lives to subsidize their staying in one place? No.

I can speak from experience. I've seen charity and love within my own family overcoming all obstacles in our times. Being born in former Yugoslavia, my family was accustomed to scarcity and socialist poverty. But I saw the family working together to achieve the greater ends of each member. This was not a socialist kind of responsibility. A family member cared for you at a point in time; later you cared for them.

My father's mother spent all her savings of thirty years to send my father to medical school. There was no government help there. When, years down the road, she had to retire because of breast cancer, guess who paid her bills and medical treatments. My aunt and uncle also assisted by living with her and taking care of her on a daily basis. There was no dependable national healthcare. There was no subsidized retirement home or social security. The children she gave birth to and raised responsibly made sure that she was well taken care off until her final days. Each was fulfilling his responsibility of a child to his mother.

The agenda of the state is to break up the family. The more you depend on the state, the more you justify its existence, and the larger it grows. The idea that people can provide things for themselves either individually or through the family frightens the state. It delegitimizes its role. The role of the family is dangerous to its survival.

The death of the family is the life of the state.