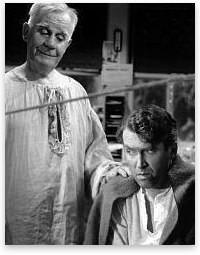 12/28/2006Llewellyn H. Rockwell Jr.
The angel Clarence introduces himself to a skeptical George Bailey in the 1946 Frank Capra film It's a Wonderful Life

As the war drags on and the state expands its reach in nearly every area of life, I'm detecting another moment of despair sweeping through libertarian ranks. Why aren't all our efforts making a difference? What are we doing wrong? Are we just wasting our time with our publications, conferences, scholarships, editorials, vast web presence, recruitments of thousands of young people? Have our educational efforts ever made any difference?

There are a thousand reasons to object to this line of thought. Let us speak to the moral and strategic ones directly. Despair is a vice that squelches and defeats the human spirit. Hope, on the other hand, creates and builds. It is true in business, sports, and intellectual life. We must see success in the future in order to achieve it.

Murray Rothbard used to wonder why people who believe that liberty is unachievable or that activism of any sort is futile became libertarian in the first place. Would a team that is convinced that it will lose every game practice or come together at all? Would an entrepreneur who is convinced that he or she will go bankrupt ever invest a dime?

Perhaps you could say that a person has no choice but to follow the truth even when it is obvious that failure is inevitable. And truly there is some virtue in doing so. But as a practical matter, it makes no sense to waste one's time doing something that is futile when one could be doing something that is productive and at least potentially successful.

So should libertarian activists be doing something else with their time?

Here is the crucial matter to consider. What might have been the fate of liberty if no one had cared about it in the last 100 years? That is an important way to look at this issue, one that accords with Frederic Bastiat's emphasis on looking not only at the seen but also at the unseen. He urged us to look at the unseen costs of state intervention. I ask that we look at the unseen benefits of activism on the part of liberty. We need to look at the statism that we do not experience, and what the world would be like if it weren't for the efforts of libertarians.

Less than a century ago, in our own country, the state was in its heyday. Socialism was the intellectual fashion, even more so than today. The income tax was seen as the answer to fiscal woes. Inflation and central banking would solve our problems with money. Antitrust regulation and litigation would achieve perfect industrial organization. World war would end despotism, or so that generation believed.

Preposterously, a small faction that would later be dominant in public life believed that if we could just pass national legislation against drinking, sobriety would prevail. Fathers would become responsible, sons would become educated, churches would fill with pious worshipers, and even poverty — which people then as now associated with substance abuse — would be a thing of the past. Speech should be thoroughly controlled and dissidents suppressed. Healthcare should be cartelized. The environment should be protected. The state would uplift us in every way.

If that trend had continued, we would have had totalitarianism right here at home. If the state had had its way — and the state is always happy with more power and money — there would have been no zone of freedom left to us, and we would live as people have always lived when the state controlled every aspect of life: in the absence of civilization. It would have been a catastrophe.

But it didn't happen. Why? Because people objected, and they kept objecting for the remainder of the century. An antiwar movement put a major dent in the war and led to an unraveling of the state afterwards — and kept us out of more wars for many years. Public outrage at the income tax led to keeping a lid on it. Inflation was kept in check by intellectuals who warned of the effects of central banking. So too with antitrust action, which has been set back by libertarian ideology. Free speech has also been protected through activism.

The alcohol prohibitionists managed to pass a constitutional amendment banning all liquor — think of that! — but their victory was short lived. Public opinion rose up against them and the amendment was eventually repealed. It was a magnificent reversal, brought about mainly by the force of public ideology that said it was causing more harm than good and violating people's rights.

We can look forward in time and see another bout of statism during the New Deal and World War II. But the state faced resistance. FDR and Truman hated, spied on, and harassed their opponents, but their opponents prevailed. FDR was stymied in his attempts to further the state, which is why he turned to war. Wartime planning and price controls were beaten back against Truman's objections. The same was true with Vietnam and the draft. The war ended because public opinion turned against it. Reality conformed more closely to the critic's views than to the proponent's views. We won.

Nixon limited traffic speed to 55mph by national decree. But another major rollback of the state happened and that was repealed. Then Carter did some good things, like deregulate trucking, and he did it because of public pressure and the triumph of free-market economics.

Again, what we need to take into account are the unseen benefits of activism. Had the advocates of liberty never spoken up, never written books, never taught in the classroom, never written editorials, and never advanced their views in any public or private forum, would the cause of liberty have been better off or the same? No way.

You have to do the counterfactual in order to understand the impact of ideology. Libertarian ideology, in all its forms, has literally saved the world from the state, which always and everywhere wants to advance and never roll back. If it does not advance and if it does roll back (however rarely), it is to the credit of public ideology.

Don't think for a second that it doesn't matter. Most of the time the impact is hard to measure and even sometimes hard to detect. Libertarian ideas are like stones dropping into water, which make waves in so many directions that no one is sure where they come from. But there are times when the Mises Institute has made a direct hit, and we know from personal testimony that we've caused bureaucrats and politicians to fly into a rage at what we are saying and what we are doing. If you think public opinion doesn't matter to these people, think again. They are terrified about the impressions the public has of their work. They can be completely demoralized by public opposition.

We live in times of incredible prosperity, unlike any we've ever known. This is due solely to the zones of freedom that remain in today's world, technology and communication among them. Why are these sectors freer and hence more productive than the rest? Because this is an area in which we've achieved success. The state is terrified to touch the internet for fear of public hostility.

Again let me ask the question: does anyone really believe that these zones of freedom are best protected when there is no public advocacy of the libertarian cause? Would Bush feel more or less secure in the continued conduct of his egregious war if the antiwar movement shut up and dried up? Would entrepreneurs feel more or less at liberty to invest if there were no advocates for their cause working in public and intellectual life?

When measuring the success of the freedom movement, these are the sorts of questions we have to ask. It is not enough to observe that the world has yet to conform to our image. We need to take note of the ways in which the world has not conformed to the state's image. No state is liberal by nature, said Mises. Every state wants to control all. If it does not do so, the major reason is that freedom-minded intellectuals are making the difference.

Ideas matter. More than we know. Why haven't we won? Because we are not doing enough and our ranks are not big enough. We need to do what we are doing on ever-grander scales. We need to make ever-better arguments on behalf of liberty. And we need to have patience, just like the prohibitionists and socialists had patience to see their agenda to the end. They've had their day. Our time will come, provided that we don't listen to the counsel of despair.

The angel Clarence says in It's a Wonderful Life that "Each man's life touches so many other lives. When he isn't around he leaves an awful hole, doesn't he?"

It's something for anyone who advocates liberty to think about before he bails out.