GET NEWS AND ARTICLES IN YOUR INBOXPrint
A
A
Home | Mises Library | Was Friedman Right About Rothbard on Collapsing Banks?

Was Friedman Right About Rothbard on Collapsing Banks? 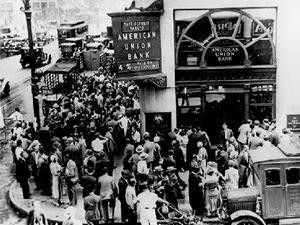 While economics supposedly is a science involving logic, it seems to me these days that prominent economists pursue their points by employing logical fallacies. Thus it was that recently I came upon a blog post by Paul Krugman in which he uses a 1999 Milton Friedman interview to attack the Austrian business cycle theory.

The logical fallacy is called argumentum ad auctoritatem or “appeal to authority” in which someone cites a statement from someone considered to be an authority on a subject, thus claiming that a certain point of view must be true because the authority said it. In his blog post, Krugman attempts to use the Friedman statement as part of deductive reasoning, taking the following from a Hoover Institution interview:

I think the Austrian business-cycle theory has done the world a great deal of harm. If you go back to the 1930s, which is a key point, here you had the Austrians sitting in London, Hayek and Lionel Robbins, and saying you just have to let the bottom drop out of the world. You’ve just got to let it cure itself. You can’t do anything about it. You will only make it worse. You have Rothbard saying it was a great mistake not to let the whole banking system collapse. I think by encouraging that kind of do-nothing policy both in Britain and in the United States, they did harm. [Emphasis mine]

Before analyzing the Friedman statement, let me first note that Krugman is trying to fashion the following argument: If Milton Friedman objected to the Austrian business cycle theory, then it must be wrong because Friedman was an advocate of free markets. Now, I doubt that Krugman would have agreed with anything else in the interview and would have been more-than-happy to claim that Friedman was wrong about nearly everything. However, because Friedman attacked the Austrians — and Krugman hates the Austrians and especially their views on business cycles — then it is OK to use Friedman against them.

Krugman’s tactics are low-level, academically speaking. Perhaps I am extrapolating to the extreme here, but if one of the world’s most respected Nobel Prize-winning economists engages regularly in the employment of cheap logical fallacies and is not called to task by his mainstream colleagues for doing so, then the state of mainstream academic economics is not good.

Given that Krugman, who has claimed the ABCT is intellectually fraudulent, cites Friedman as “proof” that the theory really is a fraud, perhaps we need to look carefully at Friedman’s statement to see if it is accurate. Now, most of the statement is opinion, but there is one line that can be examined fairly objectively: “You have Rothbard saying it was a great mistake not to let the whole banking system collapse.” Did Rothbard really say that?

While Friedman does not give the source for Rothbard’s alleged position, we do know that he did make some strong comments throughout his career about fractional reserve banking and he also gave his own policy prescriptions regarding what he believed should have been done regarding banking during the early years of the Great Depression.

If one can match a Rothbard quote to Friedman’s allegation, it most likely would have been the following from Rothbard’s book, America’s Great Depression:

The laissez-faire method would have permitted the banks of the nation to close — as they probably would have done without governmental intervention. The bankrupt banks could then have been transferred to the ownership of their depositors, who would have taken charge of the invested, frozen assets of the banks. There would have been a vast, but rapid, deflation, with the money supply falling to virtually 100 percent of the nation’s gold stock. The depositors would have been “forced savers” in the existing bank assets (loans and investments). This cleansing surgical operation would have ended, once and for all, the inherently bankrupt fractional-reserve system, would have henceforth grounded loans and investments on people’s voluntary savings rather than artificially-extended credit, and would have brought the country to a truly sound and hard monetary base. The threat of inflation and depression would have been permanently ended, and the stage fully set for recovery from the existing crisis.

While the above quotation would seem radical to someone like Friedman who really was an advocate of paper money (as is Krugman), one has to understand Rothbard’s larger points and not just his own ideological views regarding free markets. First, and most important, Rothbard believed that fractional reserve banking was inherently fraudulent and, just as important, its quicksand-like base set up the economy for financial crises.

In other words, Rothbard was declaring that the very kind of banking and financial system that Friedman championed is the very system that was at the heart of the crisis that was the Great Depression. Thus, Rothbard simply was saying that such a system should be eliminated because it was inherently destructive.

To take this further, Rothbard was not advocating the destruction of the “whole banking system,” but rather was pointing out what was obvious: the system had destroyed itself and had taken the economy down with it. This was not Rothbard wanting to kill something that was healthy, but rather wanting to admit that the already-deceased system really was dead.

Moreover, Rothbard believed that if the fractional-reserve system were permitted to pass away, a new, more stable system of banking with 100-percent reserves would have taken its place, and that financial system would have worked better than the old one. Such a state of affairs would be anathema to people like Friedman and Krugman who hold that an economy needs a “flexible” currency that can be manipulated by government authorities — always to the “public good,” of course.

Now, it is true that Rothbard’s policy prescription is short of details, such as the method depositors would have used to gain back their share of the remaining assets of the banking system. What is important, however, is the larger policy idea in which Rothbard was not so much advocating “destruction” of one system, but rather was saying that the U.S. should replace a failed system that was wracked with political interference with one that would operate apart from government authorities, would be self-regulating, and would not be subject to disastrous bank runs.

Friedman (and Krugman) would have none of this, of course. Krugman, who recently admitted that the real goal of Keynesian “economics” was state control of the economy, and that he was fine with that situation, opposes any economic sector being free of political influence. And while it is true Friedman made many good points regarding free markets, he was willing to put the most important aspect of a modern, money-based economy — money, itself — in the hands of the very entity — government — that Friedman declared was the source of most of our economic ills.

So, in recapping this whole sorry scenario, an economist employing logical fallacies who believes state control of the economy is a good thing quotes an economist who misstates the Austrian position of banking and finance, and out of this, the Austrians are seen to be in the wrong. If nothing else, this scenario speaks volumes about the sorry state of modern mainstream academic economics.