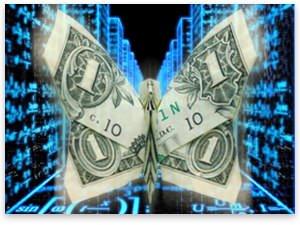 There's plenty of blame for the financial crisis being spread around. Those on the left say Wall Street wasn't regulated enough, while those on the right claim government mandates required lenders to make bad loans. The argument is made that the Federal Reserve was too loose, while the other side says Bernanke wasn't loose enough. Some blame greed. Others blame Wall Street's investment products. And then there's mathematics.

Take the Black-Scholes equation, used to estimate the value of a derivative: it is actually no more than a partial differential equation of the financial derivative's value, as a function of four variables, including time and "volatility" of the underlying asset (the derivative being a 'bet' on the future value of the asset). Differential equations are well-known to physicists, since such fundamental properties of nature as the wave equation or Schrodinger's equation for quantum mechanics are given in the form of differential equations, and in physics their solutions seem to be very reliable: so why is this not always the case in finance?

Murray Rothbard put it another way:

In physics, the facts of nature are given to us. They may be broken down into their simple elements in the laboratory and their movements observed. On the other hand, we do not know the laws explaining the movements of physical particles; they are unmotivated.

Rothbard goes on to make the point that human action is motivated and thus economics is built on the basis of axioms. We can then deduce laws from these axioms, but, as Rothbard explains, "there are no simple elements of 'facts' in human action; the events of history are complex phenomena, which cannot 'test' anything."

Using the models that work so well for physicists, mathematicians on Wall Street got it spectacularly wrong in the mortgage and derivatives markets, just as mathematical economists can never predict the future with any accuracy. Motivated human behavior cannot be modeled.

But the mathematicians or "quants" underscore all of Wall Street's financial engineering, a process that takes a few pieces of paper and folds their attributes together to make new products, most times hoping to avoid taxes and regulation. Author Brendan Moynihan describes this engineering in his book Financial Origami: How the Wall Street Model Broke.

Origami is the traditional Japanese art of paper folding wherein amazing shapes and animals are created with just a few simple folds to a piece of paper. Moynihan cleverly extends the metaphor to the financial arena, pointing out that stocks, bonds, and insurance are pieces of paper simply folded by the Wall Street sales force into swaps, options, futures, derivatives of derivatives, and the like.

Nobel Prize winners have played a big hand in the creation of derivatives. Milton Friedman's paper on the need for futures markets in currencies paved the way for that market in 1971. But as Moynihan points out, it was Nixon's shutting of the gold window that created the need to mitigate currency and inflation risk.

But it was little-known economist David X. Li's paper in the Journal of Fixed Income that would provide the intellectual foundation for Wall Street's flurry into mortgages. "On Default Correlation: A Copula Function Approach" became "the academic study used to support Wall Street's turning subprime mortgage pools into AAA-rated securities," writes Moynihan. "By the time it was over, the Street would create 64,000 AAA-rated securities, even though only 12 companies in the world had that rating."

Robert Stowe England, in his book Black Box Casino: How Wall Street's Risky Shadow Banking Crashed Global Finance, says Li's model "relied on the price history of credit default swaps against a given asset to determine the degree of correlation rather than rely on historical loan performance data."

"People got very excited about the Gaussian copula because of its mathematical elegance," says Nassim Nicholas Taleb, "but the thing never worked." Taleb, the author of The Black Swan, claims any attempt to measure correlation based on past history to be "charlatanism."

Subprime mortgages were bundled to become collateralized mortgage obligations (CMOs), which are a form of collateralized debt obligation(CDO). CDOs weren't new; the first rated CDO was assembled by Michael Milken in 1987. But instead of a mixture of investment-grade and junk corporate bonds, in the housing bubble, CDOs were rated AAA based upon Li's work.

Mr. England wryly points out, "A cynic might say that the CDO was invented to create a place to dump lower credit quality or junk bonds and hide them among better credits."

England quotes Michael Lewis, author of The Big Short: "The CDO was, in effect, a credit laundering service for the residents of Lower Middle Class America." For Wall Street it was a machine that "turned lead into gold."

Wall Street's CDO mania served to pump up investment-bank leverage. England explains that if level-3 securities were included (level-3 assets, which include CDOs, cannot be valued by using observable measures, such as market prices and models) then Bear Stearns sported leverage of 262 to 1 just before the crash. Lehman was close behind at 225, Morgan Stanley at 222, Citigroup at 212, and Goldman Sachs was levered at 200 to 1.

Leverage like that requires either perfection or eventual government bailout for survival.

The CDO market created the need for a way to bet against the CDOs and the credit-default-swap (CDS) market was born. Bundling the CDS together created synthetic CDOs. "With synthetic CDOs, Wall Street crossed over to The Matrix," writes England, "a world where reality is simulated by computers."

It's England's view that the CDO market "was the casino where the bets were placed. Wall Street became bigger and chancier than Las Vegas and Atlantic City combined — and more." According to Richard Zabel, the total notional value of the entire CDS market was $45 trillion by the end of 2007, at the same time the bond and structured vehicle markets totaled only $25 trillion.

So the speculative portion of the CDS market was at least $20 trillion with speculators betting on the possibility of a credit event for securities not owned by either party. England does not see this as a good thing. It's Mr. England's view that credit default swaps concentrated risk in certain financial institutions, instead of disbursing risk.

In "Credit Default Swaps from the Viewpoint of Libertarian Property Rights and Contract Credit Default Swaps Theory," published in Libertarian Papers, authors Thorsten Polleit and Jonathan Mariano contend, "The truth is that CDS provide investors with an efficient and effective instrument for exposing economically unsound and unsustainable fiat money regimes and the economic production structure it creates."

Polleit and Mariano explain that credit default swaps make a borrower's credit risk tradable. CDS is like an insurance policy written against the potential of a negative credit event. These derivatives, while being demonized by many observers, serve to increase "the disciplinary pressure on borrowers who are about to build up unsustainable debt levels to consolidate; or it makes borrowers who have become financially overstretched go into default."

Mr. England concludes his book saying, "We need a way forward to a safer, sounder financial system where the power of sunlight on financial institutions and markets helps enable free market discipline to work its invisible hand for the good of all."

Polleit and Mariano explain that it is the CDS market that provides that sunlight.

The panic of 2008 was the inevitable collapse of an increasingly rickety fiat-money and banking system — a system where the central bank attempts to direct and manipulate the nation's investment and production with an eye to maximize employment. In a speech delivered to the Federal Reserve Bank of New York, Jim Grant told the central bankers that interest rates should convey information. "But the only information conveyed in a manipulated yield curve is what the Fed wants."

Advising about mathematical economics, Rothbard wrote, "ignore the fancy welter of equations and look for the assumptions underneath. Invariably they are few in number, simple, and wrong." The same could be said for Dr. Li's model and Scholes's model before him.

Until the era of unstable fiat-money regimes ends, the search for scapegoats will continue — because the crashes will never end.