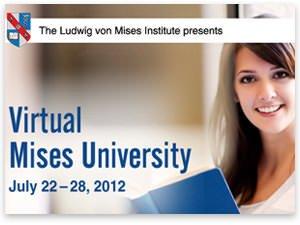 Over the course of 27 years, Mises Institute scholars have crafted and perfected a world-class week-long intensive program in Austrian economics: Mises University. This program has changed the lives of thousands of undergraduate students. Now, thanks to the support of our generous donors, it can change your life too, even if you cannot make it to Auburn. You can enroll in Virtual Mises University, and partake in the intellectual feast over the Internet.

Virtual Mises University offers live broadcasts throughout each day of the conference of all the core Mises University lectures.  But you DON’T have to be available during the broadcast times to take the course. Video recordings of the core lectures, and audio recordings of all the lectures will also be posted to the course page afterward, and will remain available long after the course is over. The course provides all of the readings that are required for the on-site attendees, as well as dedicated social and academic forums for students to discuss what they are learning and network with others who share their passion.

The online course also provides digital copies of any lecture materials (powerpoints, handouts, etc.) used by professors during their presentation.

Students who post in the course academic forum at least 10 times will be able to download a Certificate of Participation.

We are very excited to be able to offer this unmatched educational experience to anyone in the world, without being limited by physical space or geographic proximity.

Thanks to our generous donors, we are able to provide unlimited access to Virtual Mises University for only $20!

(No refunds.  All registrations for this program are final.)

Mises University faculty are among the finest scholars of Austrian Economics and libertarian political theory in the world.

Special thanks to the generous donors who made Virtual Mises University possible.

All times are central daylight time.

Orange events will be video recorded and audio recorded
only.

Red events will be audio recorded only.

(Explains how a free market could provide defense and legal services without a government monopoly.)

*  2. Errors, Business Cycles, and Government Stimulus  Engelhardt (Highlights the role of error in the Austrian Theory of the Trade Cycle, gives some justification for this role, and highlights how the most “effective” government stimulus will also be the biggest waste of resources.)

* 2.  Financial Markets in a Free Society Hulsmann (The nature and scope of financial markets.)

1. Political Entrepreneurship and the Economics of Wealth Destruction DiLorenzo  (Economics of political trickery and its wealth-destroying effects.)

1. The Economics of the Drug War Thornton (Many people oppose the “war on drugs” but only Austrian economic analysis shows why it is economically irrational.)

* 2. The Economics of Deflation  Hulsmann (Advanced lecture on the causes and consequences of deflation, highlighting the liberating impact of deflation.)

1. The Corrupt Origins of Central Banking in America  DiLorenzo (The real purpose of central banking was to enlarge the state and destroy constitutional limitations on government.)

* 2.  Entrepreneurs vs. Game Theory  Engelhardt (Questions some common applications of game theory, such as the Prisoners’ Dilemma, by highlighting how entrepreneurs can change the very structure of the “game” being played – leading to different outcomes than a more traditional, static view of game theory suggets.)

1. The Problems with Keynesian Solutions to the Current Depression Murphy  (Focuses on the specific commentary of Paul Krugman and other Keynesians regarding Obama stimulus and Bernanke’s inflation.)

2. Issues in the Economics of Medical Care Terrell

2. Apriorism and Positivism in the Social Sciences Gordon (Compares and contrasts Mises’s praxeology with Positivism.)

1.  Theory and History Gordon (Discusses Mises’s views on historical explanation and his criticism of  Marxism.)

* 2.  Time Preference Theory of Interest & Its Critics Herbener (A restatement of the pure time preference theory advanced by Frank Fetter, Ludwig von Mises, and Murray Rothbard and defense of the theory from its critics.)

* 2. On the Impossibility of Central Planning  Engelhardt (Describes the Information and Computation problems.)