GET NEWS AND ARTICLES IN YOUR INBOXPrint
A
A
Home | Mises Library | Value in Devaluation? 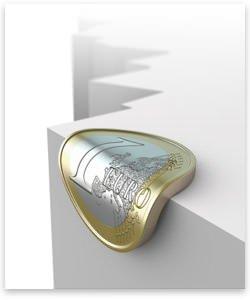 The euro is in trouble. That is not news. What is news is that people with deep pockets are willing to pay for economists to provide a solution. Lord Wolfson has offered a £250,000 prize for the best way a country can exit the European Monetary Union (EMU). Five finalists for the prize were announced in March. The winner will be announced in June.

None of the five finalists — Neil Record, Jens Nordvig, Jonathan Tepper, Catherine Dobbs, and Roger Bootle — advocates a return to sound money; all assume that new, national fiat currencies will float; and all assume that unproductive countries will benefit from devalued new currencies. The theory is that a devalued currency will spur export-driven economic growth. Furthermore, they have little confidence that economic reforms — which they all, by the way, do recommend — will be achieved in the near term and see devaluation as a quicker alternative. But will this work? First a word about devaluation itself.

Historically, devaluation of a currency referred to its relationship to gold. Gold could not be expanded in any appreciable amounts very quickly. It had to be dug up, minted, and placed into circulation at some expense over a long period of time. Coin clipping and substituting a base metal for some percentage of the gold in coins were early means of money debasement. Later, paper currencies could be expanded as quickly and as cheaply as the mint could run paper through its presses, but even this pales in comparison to these electronic times in which money can be expanded to any amount desired at the click of a mouse. Devaluations occurred, of course, even when governments admitted that gold was money. Notable examples are the Swiss devaluation in 1936, detailed so succinctly by Mises in Human Action, and America's shocking 69 percent devaluation in 1934. Both of these, and others like them, were considered shameful and self-serving acts. Devaluation was tantamount to an admission of fraud. The country's central bank had printed and circulated more units of currency than it could redeem at the currency-to-gold price it had promised its trading partners. This, of course, had disastrous effects on everyone who held contractual promises to be paid in gold.

Devaluing against Other Fiat Currencies

The devaluation advocated by many economists today is quite different in one regard. There is no commodity reserve — gold or silver, for example — against which the nation's currency is to be devalued. Modern devaluation advocates refer to the currency's value, or exchange ratio, in relation to all other fiat currencies. The exchange value between currencies is governed by purchasing-power parity, which is the simple comparison of the price levels of two countries as expressed in local currency. Nevertheless, the mechanism for devaluing is still the same as that which occurred under gold: inflation of the fiat-money supply. For example, the central bank could give foreign buyers more local currency with which to buy local goods. This increased supply of local currency eventually works its way through the economy, raising all prices. Economists refer to this process as "importing inflation." The devaluation advocates attempt to convince their countrymen that what was once a shameful act is now a positive good. For example, the Swiss are trying to lower the value of their currency in relation to all others.

What of the proposition that taking positive steps to devalue one's own currency against all others, if it can be achieved, will actually help a country become more competitive? What have others said on this subject?

A policy of currency devaluation can be judged by whether or not it satisfies Immanuel Kant's "categorical imperative," which asks whether the action will benefit all men, at all places, and at all times. Certainly a devaluation will benefit exporters, who can expect to make more sales. Their foreign customers get more local currency in exchange for their own. Exports increase. The exporter's position is one that is best examined by considering Frederic Bastiat's brilliant essay "That Which Is Seen, and That Which Is Not Seen" and "The Lesson" found in Henry Hazlitt's Economics in One Lesson.

At the instance of exchanging his money for more local currency, the foreign buyer will indeed be inclined to purchase more of the goods from the country that devalued. This we can see, and most pundits consider it a good thing. The exporter's increased sales can be measured. This is seen. But what about the importer's lost sales? Importers can expect the opposite. The local currency will buy less, and they can expect sales to fall due to the necessity of raising prices to reflect the reduced purchasing power of their local currency. How can one measure sales that never happened? This is Bastiat's unseen.

And this is merely the beginning.

Hazlitt would tell us to look at the longer-term effects of Bastiat's insight. What is seen is that exporters get first use of the newly created money and buy replacement factors of production at current prices. The increased profits from the higher sales enrich them, because they are the early receivers of the money. But how about those who get the money much later, such as wholesalers, or not at all, such as retirees?

Over time the new money causes all prices to rise, even the exporter's factors of production. The benefits to the exporter of the monetary intervention have slowly evaporated. The costs of his factors of production have risen. His sales start to fall back to pre-intervention levels. What can he do except lobby the government for another shot of monetary expansion to give his customers even more local currency with which to buy his products?

But even this increase in overall prices and their redistributive effects is not the entire story. The increase in the nation's money supply will cause the boom-bust business cycle. The boom phase has been misinterpreted by the Wolfson Prize finalists, who see historical evidence in the beneficial effects of devaluation. For example, Jonathan Tepper writes that "in August 1998, Russia defaulted on its sovereign debt and devalued its currency. The expected catastrophe didn't happen." Later he writes, "Argentina was forced to default and devalue in late 2001 and early 2002. Despite dire predictions, the economy did extraordinarily well." But these are merely the expected and temporary appearances of the boom phase caused by monetary expansion. Not only does the bankrupt nation shed itself of its debt and get to keep its ill-gotten gains; its expansionist monetary policy touches off a speculative boom. Neither Russia nor Argentina have built sustainable, capitalist economies.

The Exporter as Wealth-Transfer Agent

It should be clear that there is no net benefit to the country that drives down the purchasing power of its currency through monetary expansion. The only reason the exporter makes more sales is that the buyer of the exporter's goods gets a lower price. This lower price was not the result of manufacturing efficiencies, but of a subsidy — a transfer of wealth — from some in the exporting country to the foreign purchaser of the goods. With each successive monetary expansion, wealth is funneled to the exporter, his employees, and others who get the money early in the expansion phase. All others are harmed. In effect, the exporter's sales have been subsidized by his fellow citizens who are the late receivers of the new money. The exporter is the unseen means by which the transfer is effected. The nation as a whole is worse off; it is not more competitive.

Delaying Real Reform in a Fruitless "Race to the Bottom"

Politicians and their professional economist supporters are doing their fellow citizens an injustice by pursuing devaluation as a quick and easy means to improve national competitiveness. The source of real competitive advantage is through liberal reform of economic policies that reward industriousness in a people, protect their property and even that of foreigners from confiscatory taxation, and encourage savings. Over time the country's capital base in relation to its population will increase — an increase in capital per capita, as economists say — raising real prosperity through increased worker productivity. But instead of forthrightly pursuing economic reform, which one must admit will be difficult, politicians and their professional-economist supporters are fomenting a "race to the bottom," by which each country tries to boost exports via competitive devaluations against all others. The nation's capital base will slowly dwindle through the backdoor export subsidy made possible through monetary debasement.

The Moral Hazard of the Welfare State

There is nothing preventing any member of the EMU from becoming more competitive right now. All that is required is a willingness to lower prices. As the common medium of exchange, the euro reveals uncompetitive economic structures. So why do those countries wishing to become more competitive refrain from lowering prices? The answer is the welfare state. In an unhampered market economy, there is no structural unemployment. All who wish to work can do so, because there is never a dearth of work to be done. But the welfare state removes the cost of pricing one's labor or one's goods and services too high. One might say that the welfare state underpins structural rigidities in an economy, such as labor laws, licensing, etc., by removing the cost of market interventions. Devaluation does not address this underlying problem; therefore, devaluation will not cure a country's lack of competitiveness.

Devaluation means monetary expansion. The new money must enter the economy somewhere — payments to exporters, for example. The ensuing bubble is misinterpreted as a sign of the success of devaluation. But the bubble is accompanied by the well-known deleterious effects of a rising price level, income redistribution, and malinvestment. As the prices for exporters' factors of production rise and the benefits of devaluation fade away, there will be calls for more money expansion. If more than one country pursues this policy, there ensues a disastrous race to the bottom.

The solution is sound money. Sound money reveals bad economic policy and forces each country to live within its means. Governments will come under pressure to liberalize their economies and shed themselves of the parasitic destroyers of wealth. Devaluation retards this process.