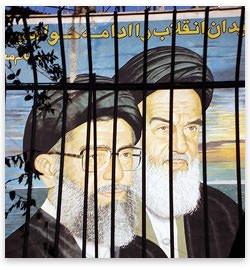 As the Iranian government continues to resist American political pressure to abandon its nuclear program, the United States and her allies have once again turned to economic sanctions as a method of enforcing their will — or, at least, so they intend. On June 9, 2010, the United Nations Security Council passed Resolution 1929, which, among other things, bans the sale of armaments and the provision of military training to the Iranian military, and prohibits travel for certain blacklisted Iranian citizens. Unsatisfied, the United States and the European Union intends to enact even tougher economic sanctions of their own in the near future. Even worse, these are only additions to sanctions that have existed since the Revolution of 1979.

Trade sanctions are meant to destabilize regimes, forcing them to compromise with the aggressing government. Sanctions do this by threatening the regime's survivability, by undermining any support it may have amongst the population. These are the intentions of the American government, supposedly as a result of Iran's "dangerous" nuclear program. (Ironically, sanctions may only increase the country's ambitions to become a nuclear power, as a weapons-starved Iran turns to the nuclear warhead as the only means to ward off American political aggression). Additionally, and tragically, despite American intentions, the more likely outcome is the unintended effect of pushing Iranians toward their government and undermining an otherwise growing local antiextremist movement.

By definition, trade sanctions regulate exchange between Iranians and foreigners. Therefore, these individuals are directly punished by trade sanctions, not their respective governments. Those whose businesses rely on the import of foreign material are now forced out of the market. The thousands of individuals who live off of cheap, imported foodstuffs are now barred from doing so. This leads to impoverishment by forcing them to pay much higher domestic prices for less food. Thus, trade sanctions may also lead to outright mass starvation, as they did in the case of Iraq.

There are also hundreds indirectly punished by the coerced restraint of mutual exchange. Those who rely on import-oriented industries for employment, for example, will soon find themselves without a source of income. The bottom line is that trade sanctions create poverty.

As an ongoing example, trade sanctions that have been in place since 1979 have made it too difficult for Iranian airlines to modernize their aircraft fleets, or to procure the spare parts necessary to maintain them. The unfortunate result has been an increasing rate of aerial accidents, leading to the injury and death of at least dozens — if not hundreds — of individuals. It could not possibly be the fear that spare parts meant for Iranian civilian airlines may be used to maintain Iranian combat aircraft. It's doubtful that two very complex and very different machines use the same parts. The target of the embargo is really the Iranian people.

The fact that trade sanctions directly impoverish the people of a country, not their government, is of no consequence to the those making the decision to impose said sanctions. In fact, this is the underlying objective sought. The sanctioners hope that the impoverished people will in turn recognize their governments as the ones at fault. But, historically speaking, this approach has been weighed and found wanting. (One continued, overwhelming failure of American embargo diplomacy is Cuba, which after 50 years of sanctions still remains a Communist dictatorship.)

Furthermore, unlike Cuba, the existing political climate in Iran gives the United Nations's intensification of trade sanctions a very high opportunity cost — threatening the viability of a local opposition movement to the same government the United States is trying to destabilize. In 2009, in response to Mahmoud Ahmadinejad's controversial victory over Mir-Hossein Mousavi in the Iranian presidential election, a substantial percentage of the Iranian population protested the results. The situation proved chaotic, with hundreds arrested and at least five individuals executed.

While what has become known as the Green Movement — in reference to Mousavi's campaign colors — does not represent the majority of the Iranian population, it's clear that political opposition to Ahmadinejad's presidency is growing. Finally, despite the Green Movement's relatively small size, it has formed the strongest resistance to the status quo in the Iranian government — stronger than that formed by Western threats and restrictions.

Barack Obama's administration has chosen to avoid directly supporting — at least overtly — the growing democratic movement in Iran. From a libertarian perspective, such a policy of nonalignment is positive (although, let's not be fooled, Obama's actions are not guided by libertarianism). But ultimately the administration's and the United Nations's recent decisions to intensify sanctions are the worst stances they could have taken short of directly aiding the current Iranian regime to squash the political opposition. In other words, rather than being genuinely nonaligned, by continuing trade sanctions against Iran, the Obama administration is instead directly benefitting the existing Islamist regime.

"The target of the embargo is really the Iranian people."

Perhaps the majority of Iranian citizens still support Ahmadinejad, and perhaps the short-term viability of an internal political revolution is extremely unlikely. What is important, however, is not the present strength of the opposition, but the potential growth of dissent. Trade sanctions can only impoverish the tens of thousands of Iranians who form part of this political opposition, thereby forcing them to look for protection in the arms of the very regime they oppose.

Despite a multitude of poor political decisions — including price-fixing schemes that have created shortages in the targeted markets — Ahmadinejad's regime maintains popularity through social-spending programs. As such, in a country where people's accumulated wealth is threatened by trade restrictions, government aid may be the only recourse left. Ahmadinejad's government is likely more than happy to win people over by aiding those harmed by American trade sanctions. Furthermore, the Tehran government is probably thrilled to use American-led trade sanctions to vilify the West and legitimize its own power.

It is truly disappointing that American foreign policy is directly contributing to the eradication of what would otherwise be a growing liberal political movement. Knowing that a growing sector of the antiestablishment movement is made up of young Iranian students, it is tragic that because of these economic sanctions the possibility of a new, more liberal generation of Iranians is being undercut. The greatest hope for Iranian democracy is being squashed, not by the repressive military of an overbearing authoritarian government, but by the bootheels of the self-styled beacon of liberty — the same "beacon of liberty" that invaded Afghanistan and Iraq to allegedly provide democracy to those peoples.

A far more rational approach would be one of political and economic openness, or one that eases the creation of wealth in Iran — that completely eliminates the government's interventionism in Iran. A relatively wealthy Iranian population is less likely to support a local government bent on creating tension with other world governments, as this would create the potential of a threat to that accumulated wealth. Furthermore, an Iranian population unperturbed by foreign restrictions on their ability to produce can then shift the blame of continued poverty onto the local regime. It goes without saying that without foreign intervention, the local government will find it difficult to point the finger elsewhere.

Most have heard the proverb, "the enemy of your enemy is your friend." Even a politician will agree that a political policy that harms the "enemy of your enemy" (the Green Movement, in Iran's case) is worse than a policy that neither benefits your friends nor harms your enemy. As such, it is stupefying how a government can support measures that undermine its own objectives. What is more incredible is that this is not a policy devised by a naïve or novice administration. It is the product of more than 30 years of American foreign policy, Democratic and Republican alike!

It is worth mentioning that trade sanctions against Iran run counter to the welfare of the average American as well. Amidst high unemployment and stagnating private investment, it is amazing how the American government is willing to prioritize its own political machinations — political influence in the Middle East — over the well-being of the people it claims to protect. Admittedly, the economic benefit of free trade with Iran (as compared to the benefits of free trade with Europe or China, for example) may very well be limited, but it nevertheless stands that restricting trade is by no means a benefit.

Trade sanctions hurt Americans and undermine the growing anti-Ahmadinejad movement, thereby also undermining the American government's own interests. Compounding this with the moral objection to sanctions (that which questions the moral legitimacy of American intervention concerning issues traditionally only within the jurisdiction of the Iranian people), and the fact that the so-called Iranian "threat" does not actually exist, one would be hard-pressed to find a reason to support the embargo. While nobody likes speaking in absolutes, it is very probable that there are absolutely no reasons to continue sanctions on Iran. It is far past the right time to reverse this disastrous political policy — but, given the current administration's track record, don't hold your breath.