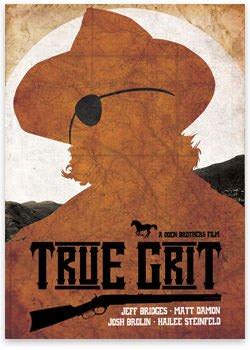 With ten Academy Award nominations, True Grit is positioned to take home plenty of Oscar gold. When told of all the nominations, the Coen brothers, who directed and adapted the screenplay for this remake of the original that starred John Wayne, would only say, "Ten seems like an awful lot. We don't want to take anyone else's."

The film has been snubbed by the other industry groups, but the Academy has given Jeff Bridges, who plays Rooster Cogburn, the role Wayne won his only Oscar for, a chance to win two in a row, having won last year for Crazy Heart. Newcomer Hailee Steinfeld, who plays Mattie Ross, is appropriately 14 years old and is being given her best chance to collect an Oscar by being nominated in the supporting-actress category. Steinfeld is in virtually every scene in True Grit, but some wags call this year's best actress crop the strongest ever, so the supporting nomination gives her a chance.

Joel and Ethan Coen are up for best director and for best adapted screenplay. Anyone who has seen both films will note the similarity in story and dialogue. The only adaption needed from Charles Portis's novel, released in 1968, is to leave as much of the dialogue and narration intact as possible. In the book, the Mattie Ross character recounts the story as an old spinster, for instance, describing Cogburn as "an old one-eyed jasper that was built along the lines of Grover Cleveland." The 1969 True Grit uses none of this, while the Coen brothers, who didn't watch the original picture, make use of the elder Mattie's narration at the beginning and end of their version.

John Wayne's True Grit had a contrived feel-good ending that bears no resemblance to the novel, while the Coen brothers more closely follows Portis's fine work. In fact, the original film is set in spring or summer with the only snow shown at the end, while the book and the new film are set in the dead of winter, an important part of the story. It speaks that much more to 14-year-old Mattie's will that she set off in wintertime to find her father's killer Tom Chaney in the middle of Indian country with hired hand Deputy Sheriff Rooster Cogburn and Texas Ranger La Boeuf (pronounced La Beef), played in the original by Glenn Campbell and by Matt Damon in the latest version.

As a fan of all John Wayne movies (with a few exceptions) from Red River in 1948 to The Shootist in 1976, I admit to being stunned when I first saw the movie poster for the current True Grit. Who could be gutsy enough to remake the Duke? Even then-President Richard Nixon loved the picture, and was moved to write Wayne a "Dear Duke" fan letter from the Oval Office: "I saw it in the W.H. with my family and for once we agree with the critics — you were great!"

It turns out, that's the problem with the original, the script was written for John Wayne, leaving too much Portis on the floor and the story rearranged. I hadn't realized there was a True Grit novel until reading reviews for the new version that quoted the Coens as saying they wanted their movie to be true to the book.

And that's why the new Grit is up for best picture. The Charles Portis novel is a classic. In the afterword to the new edition, Donna Tartt compares the book to Huckleberry Finn and The Wizard of Oz, writing that True Grit "was read along with Walt Whitman and Nathaniel Hawthorne and Edgar Alan Poe in the Honors English classes at my school." But then the book vanished from public view, which Ms. Tartt blames on the original film, "which doesn't do the book justice."

Mr. Portis is still alive and kicking and met with Carlo Rotella in November of last year before the new Grit premiered. Portis wouldn't agree to an interview, but Rotella provides a peek at Portis in a nice piece for the New York Times.

Rotella quickly disabuses the notion that True Grit was a one-hit wonder:

There are passionate readers, among them the literary maestro Jonathan Lethem, the crime writer George Pelecanos and Ron Rosenbaum, that obsessive reporter on our obsessions, who regard Portis as a major figure in his own right: possessor of an original American literary voice comparable to Mark Twain's.

"There's a special challenge in adapting a writer like Portis for the screen, because so much of his craft lies in that combination of word-music and sensibility called literary voice," writes Rotella. To my mind Portis should just be given screenwriting credit.

When accused of making a feel-good movie, Ethan Coen told the New York Times, "It's not our fault. It was based on the novel. That's the good thing about adapting novels. You blame it on the book."

In the same interview brother Joel said, "We didn't think we should mess around with what we thought was a very compelling story and character."

Portis has never worked on adapting his novels for the screen and seems to be happy living life on his own terms in Arkansas. And he has a new fan in the Coen bother's La Boeuf, Matt Damon. "Once I read it, I understood, because the language is amazing," says Damon. "So much of the dialogue that is in this movie is right out of the book." And while Portis does nothing to promote himself, his book is again on the trade-paperback bestseller list.

At least one reviewer was dismayed that everything had a price in the True Grit story. Indeed, Mattie Ross is constantly making economic calculations, while trying to make the best deals she can. She was the family caretaker. Her father was wont to chase financial schemes when he was alive and her mother was uneducated. Mattie kept the books and probably did most of the negotiating on the farm. Her negotiations with Col. G. Stonehill ("Licensed Auctioneer. Cotton Factor." — played best by Strother Martin in the 1969 version) are one of the highlights of both movies and the book.

Stonehill is only in Fort Smith for the commerce, but the business activity disappoints him and he would love to leave. When Mattie informs him that her attorney, J. Noble Daggett, was being considered Arkansas gubernatorial material, Stonehill replies, "Then he is a man of little ambition." When the two discuss Tom Chaney's escape to the Territory, Stonehill councils, "The civilized arts of commerce do not flourish there."

However, Stonehill didn't excel at the art of commerce. After Mattie had negotiated for Stonehill to buy the ponies back that her father had purchased from him, she returned to buy a horse to ride to the Indian territory. Stonehill complained that his only offer for the ponies was from a soap man in Little Rock at ten dollars a head, but "the matter is still hanging fire."

"I will take one of those ponies off your hands."

"What is your offer?"

"I will pay the market price. I believe you said the soap man offered you ten dollars a head."

"That is a lot price. You will recall that I paid you twenty dollars a head only this morning."

"That was the market price at that time."

Mattie comically shows her Presbyterian and political leanings when Portis has his character leave the story to inject occasional moralizing like any old woman telling a story inevitably would. Mattie praised the Harrison Narcotics Law and the Volstead Act, and calls Woodrow Wilson "the greatest Presbyterian gentlemen of the age." Grover Cleveland, she says, "brought a good deal of misery to the land in the Panic of '93 but I am not ashamed to own that my family supported him and has stayed with the Democrats right on through." And, "Tad Stevens and the Republican gang would have starved us all out if they could."

While recounting a story about a Methodist hanging judge on his deathbed converting to Catholicism,

If you had sentenced one hundred and sixty men to death and seen around eighty of them swing, then maybe at the last minute you would feel the need of some stronger medicine than the Methodists could make.

At the end of Portis's tale, Mattie does move Cogburn's remains to her family plot, much to the chagrin of the Dardanelle locals who called her a cranky old maid. "People love to talk. They love to slander you if you have any substance." She goes on that the locals only think she loves her money and the church and that's why she never married.

She didn't have time for marriage but admits,

A woman with brains and a frank tongue and one sleeve pinned up and an invalid mother to care for is at some disadvantage, although I will say I could have had two or three old untidy men around who had their eyes fastened on my bank. No, thank you!

Mattie was waiting in vain to meet another man with true grit.