GET NEWS AND ARTICLES IN YOUR INBOXPrint
A
A
Home | Mises Library | Trade Makes People Better Off, Even Superheroes 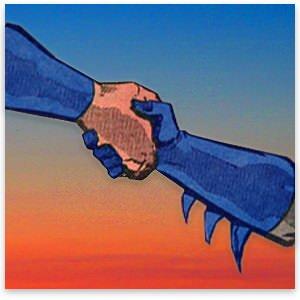 Paul Samuelson, one of the most famous and influential economists of the 20th century, was once asked to name an idea in economic theory that was both true and nontrivial. After several years, he responded that the law of comparative advantage fits the bill, saying that its logical truth "need not be argued before a mathematician" and arguing that its nontriviality was "attested by the thousands of important and intelligent men who have never been able to grasp the doctrine for themselves or to believe it after it was explained to them."

The law of comparative advantage shows us how we can (seemingly) create something from nothing merely by redirecting our efforts and trading. According to a popular canard, however, comparative advantage is irrelevant when there are gross differences in productivity (such as, for example, the differences in productivity between the developing and the developed world). How can trade make both parties better off if one is so much better at everything than someone else? Productivity differences, even extraordinary productivity differences, do not mean that both parties can't gain from trade. Even superheroes like Superman, Batman, the X-Men, and the Civic-Minded Five can gain from trade.

Let us see some examples to see how this is possible. People can produce and consume things without trading, or they can expand their production and consumption possibilities through trade. Consider the case of Superman and Batman. Suppose they have the following production possibilities for "burglars apprehended" and "kittens saved." That is, the table represents the maximum amount of burglar apprehending or kitten saving that each can achieve, if each devotes his entire day to that one task. The extraterrestrial Superman can apprehend one hundred burglars in a day or save one thousand kittens in a day, while Batman, constrained by his terrestriality, can only apprehend six burglars per day or save eighteen kittens per day.

Suppose that they each divide their days equally between burglar apprehension and kitten saving. Thus, they each produce the following:

Combined, they serve society by apprehending 53 burglars and saving 509 kittens daily. Even for superheroes, though, there is no such thing as a free lunch. For Superman, the opportunity cost of every burglar apprehended is ten kittens saved. For Batman, the opportunity cost of every burglar apprehended is three kittens saved. Bruce Wayne, aka Batman, is dissatisfied with this output and wishes that he and the Man of Steel could somehow do more. He is running low on ideas when he recalls learning something about the theory of comparative advantage in his Econ 101 class at Gotham University. He calls Superman and proposes the following: he will completely specialize in burglar apprehension while Superman will apprehend a mere 47 burglars per day and save 530 kittens.

Without specialization, total "social output" is 53 apprehended burglars and 509 saved kittens. With specialization, however, our heroes combine to apprehend 53 burglars and save 530 kittens. On net, society enjoys an additional 21 kittens saved, at no cost in burglars apprehended. Truth, justice, and the American way are safer as a result. This point would remain true if, instead of Batman, we considered an average person — let's call him Captain Ordinary. Perhaps Captain Ordinary could only stop one burglar or save two kittens per day. Let's suppose he chooses to save two kittens every day in the absence of "trade" with Superman. If Superman gives up catching one burglar, so that he can save ten more kittens, and Captain Ordinary catches that burglar instead, then we get ten more kittens saved, at no cost in burglars caught.

Even when we talk about groups, the law of comparative advantage still holds. The law of comparative advantage can also tell us when some people might want to find a different line of work, or when we should outsource some tasks, even in cases where productivity numbers might be very similar. Suppose the X-Men can solve twelve crimes in a day while the Civic-Minded Five can solve four. Meanwhile, the X-Men, using their super powers, can cook eight pizzas in a day, while the Civic-Minded Five, using their not-so-super powers, can cook six. Thus, they have the following production possibilities:

The Civic-Minded Five, who first got to know each other as a study group in their Econ 101 class, decide that they could probably get more done if they outsourced their crime-solving jobs to the X-Men and instead focused their efforts on cooking pizza. They propose the following division of labor and offer to trade the X-Men three pizzas in exchange for being able to claim credit for three crimes solved by the X-Men.

It takes a while to convince the X-men that the Civic-Minded Five aren't a joke, but eventually they agree. Final output after they trade looks like this:

Every day, the X-Men get an additional 1.5 crimes solved, and the Civic-Minded Five (now the Pizza-Minded Five) get to claim credit for three crimes solved instead of two. Both are able to enjoy as much pizza as before, and through specialization, the world is richer by an additional 2.5 solved crimes per day.

One of the fundamental postulates in economics is that trade increases productivity and creates wealth. This is true even when some people have extraordinary abilities. The law of comparative advantage tells us that no matter how much more productive they are than the rest of us, even people who are very productive can be made better off by trading with people who are not.