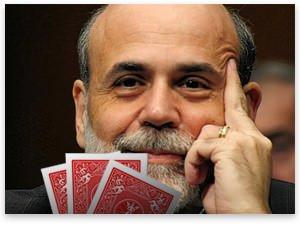 03/14/2011Robert P. Murphy
Whether giving public lectures or teaching at the Mises Academy, I'm often asked whether Bernanke will be able to "pull this off." Specifically, can the Fed gracefully exit from the huge hole it has dug for itself?

Unfortunately my answer is no. In the present article I'll go over three possible exit options, and explain the flaws in each.

Before assessing the chances of escape, let's first review what the problem is: 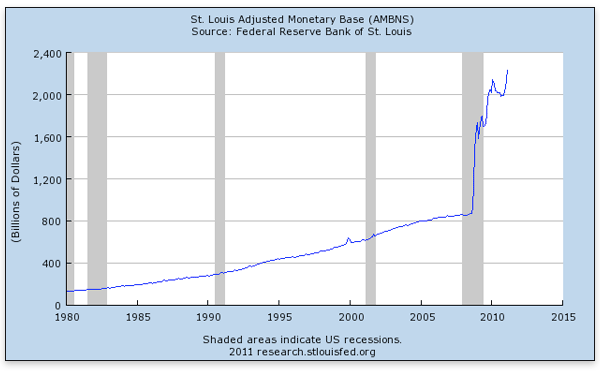 The monetary base (see here for a breakdown of the various monetary aggregates) has exploded since the onset of the financial crisis in late 2008. After a huge initial spurt, the base shot up twice more, in response to the first and second rounds of "quantitative easing."

To get a sense of just how unprecedented and enormous Bernanke's injections have been, look at the relatively insignificant blip back at the start of 2000. To calm the markets heading into the Y2K changeover, Greenspan preemptively flooded the system with liquidity. At the time, many Fed watchers blamed that spike and fall for exacerbating the bubble in the NASDAQ. But in comparison with Bernanke's moves, we can barely find Greenspan's Y2K fiddling on the chart.

Austrian economists know that the Fed's creation of new money can distort markets by pushing interest rates below their natural market level. This is a subtle point that most commentators ignore. Instead, the thing that has more and more people worrying at night is the potential for runaway price inflation.

Specifically, there are currently about $1.2 trillion in "excess reserves" in the banking system. Loosely speaking, the banks have this much money on deposit with the Fed, above and beyond their reserve requirements (needed to "back up" their existing customer checking account balances and the like), and they are free to lend it out to their own customers.

Because of the fractional-reserve banking system, the $1.2 trillion in excess reserves could ultimately translate into almost $11 trillion in new money created by the banks, as they pyramid new loans on top of the base money Bernanke has injected. The M1 measure of the money stock is currently $1.9 trillion, meaning that even if the Fed stopped inflating tomorrow, the banking system would have the potential to increase the money stock by a factor of six. Even if the demand for dollars remained constant in such an environment (which it wouldn't), that could mean oil prices above $600 a barrel.

So far, we haven't seen such massive price inflation, because the banks are reluctant to advance new loans. But at some point — because their balance sheets have sufficiently healed, or because creditworthy borrowers begin offering higher interest rates — the commercial banks will begin taking their excess reserves (currently parked at the Fed) and making new loans to their customers. At that point, the Fed will need to act quickly to prevent a self-perpetuating spiral into price inflation.

Publicly, Bernanke and other Fed officials are confident that they will be able to take the punch bowl away before the guests become too intoxicated. But their rosy predictions simply assume that severe stagflation is not possible. We'll go through three possible options for dealing with the above problem, and show the flaws in each.

The option that Bernanke himself frequently mentions is the Fed's ability to offer higher interest rates on excess reserves. Currently, if a commercial bank keeps its excess reserves parked at the Fed, the balance grows at an annual percentage rate (APR) of 0.25 percent, or what is called 25 "basis points."

Now suppose (either because of rising price inflation or because of a healthy recovery) that the prime rate — what commercial banks charge their best clients — rises from its current level (3.25 percent) to, say, 10 percent. (This isn't farfetched; the prime rate was higher than 10 percent in the late 1980s.)

Faced with earning a completely safe 0.25 percent by keeping their money parked at the Fed, versus earning a very (but not perfectly) safe 10 percent by lending to their most stable customers, many banks would begin drawing down their excess reserves, thus starting the inflationary spiral. To check this, the Fed could also bump up the yield it pays, to (say) 7.25 percent. By maintaining the spread between the two rates, the Fed could bribe the bankers to keep their money locked up at the Fed.

For one thing, it's important to note that Bernanke, Geithner, and other officials are trying to have it both ways with the public. On the one hand, they pat themselves on the back for saving the financial system and ensuring the smooth functioning of the credit markets so that businesses can continue to make their payroll and so forth. Yet on the other hand, Bernanke implicitly admits that right now banks are not making loans with the more than $1 trillion he's injected into the system, and that if they started to lend out that money, he would offer them even more to stop.

"Taxpayers would ultimately be the ones paying bankers to not give them loans."

In any event, Bernanke's favored "tool" of raising the interest rate on excess reserves is the epitome of kicking the can down the road. In the beginning, the higher payments would simply reduce the Fed's net earnings, meaning that it would remit less money to the Treasury. Thus, the federal deficit would grow larger, meaning that taxpayers would ultimately be the ones paying bankers to not give them loans.

But at some point, if the process continued, the Fed would have exhausted its income from other sources. For example, on a balance of $1.2 trillion, if the Fed had to pay 7.5 percent interest, that would translate into $90 billion in annual payments to the banks. (The Fed earned about $81 billion in net income in 2010, of which it remitted $78 billion to the Treasury.)

To be sure, nothing would stop Bernanke from making such payments. He isn't constrained by income statements; Bernanke laughs at the shackles holding back lesser men. He could simply bump up the numbers in the Fed's computers in order to reflect the growing reserves balances of the commercial banks if they kept their funds with the Fed.

Option #2: Pull Reserves Out of the System

The most obvious solution to the problem would be to reverse the operations that got us into the mess. Specifically, the Fed could stop reinvesting the proceeds of its current asset holdings, so that its balance sheet would gradually shrink as its existing Treasury bonds and mortgage-backed securities matured.1 If more drastic action were needed, the Fed could begin selling off its assets before maturity. When private-sector institutions wrote checks to purchase them, those reserves would disappear from the system.

But if the Austrian critique of Bernanke is correct, he has not built a solid foundation for recovery. Instead, he has merely pushed back the day of reckoning a few years, in the same way that Alan Greenspan staved off the dot-com crash only to serve up the housing crash.

What happens if producer prices continue rising, squeezing retailers so that eventually even consumer prices begin rising at, say, 8 percent annualized rates? And what if the real-estate market is still a mess, and unemployment is still 9 percent at that point? As yields rise in response to the price inflation, commercial banks won't be content to sit on cash. They will need to "put it to work" to keep up with the declining value of the dollar.

In that environment, if Bernanke started selling off hundreds of billions worth of Fed assets (consisting of Treasury debt, Freddie and Fannie debt, and mortgage-backed securities), it would cause a sharp spike in interest rates, and would devastate the real-estate and financial sectors. Just as Bernanke's original interventions obviously helped the major players in these fields, the reverse of those interventions would obviously hurt them. The enormous federal deficit would no longer seem so innocuous once interest rates on even short-term Treasuries began rising.

In short, shrinking the Fed's balance sheet — and thereby destroying the excess reserves just as magically as Bernanke's purchases originally created them — could "work," but in particular (plausible) scenarios it would plunge the United States back into depression. Bernanke and other optimists have not explained why these scenarios won't occur, besides the obviously false assertion that we can't have rising prices with high unemployment.

To add yet another twist, we should point out that if the price inflation or the financial crashes (or both) were severe enough, the Fed's assets might drop significantly before Bernanke could sell them back to the market. In that case, even if he wanted to, Bernanke couldn't suck out all of the $1.2 trillion in excess reserves, because he would be selling the assets for less than he originally paid to acquire them.

Hard-money enthusiasts occasionally ask me, "Couldn't Bernanke just increase the reserve requirements?" For example, what if Bernanke ended the fractional-reserve system, and insisted that commercial banks have $100 set aside in reserves (either as cash in their vaults or as electronic deposits with the Fed) for every $100 in customer deposits?

Like the previous solution, this one too would "work" but it would devastate the financial sector even more. From the commercial banks' viewpoint, such a policy move would effectively steal $1.2 trillion in cash from them.

To see why, consider an analogy: Suppose Bill Smith has a salary of $100,00 per year. Now Smith is a very cautious man, who has carefully saved up $100,000 in his checking account. Smith is very paranoid and doesn't even trust money-market mutual funds; no, he wants his money "in the bank," in an FDIC-insured account.

In such a (ridiculous) scenario, it's obvious that our poor Bill Smith would be devastated. His stockpile of $100,000 — which the day before was a wonderful emergency fund that could weather all sorts of storms — would now be useless, except as a way to fend off huge fines from the government. It would no longer be savings at all. Smith would have to start from scratch, and begin building up savings of $200,000 to get back to his previous level of security.

A similar analysis holds for the commercial banks. Even though many commentators talk as if the $1.2 trillion in excess reserves aren't "real money," because they aren't "in the economy," this isn't accurate. Just ask the bankers if they consider those funds to be real money.

If the Fed were to raise reserve requirements, the money that commercial bankers currently view as a hoard of cash would lose its economic significance. It would be equivalent to the Fed simply seizing the funds. This is why raising the reserve requirements would devastate the banks even more than selling off assets: At least if the Fed destroys reserves by selling assets, the commercial banks voluntarily make the trade, and end up with something valuable.

No one knows the future; I am not certain how things will play out. What alarms me more than the basic facts, however, is that the people telling us we have nothing to worry about typically don't even look two steps ahead in their analysis. Bernanke has effectively gone "all in" with his successive rounds of quantitative easing, and I get the queasy feeling that he's bluffing.