They Want Us to Love the Fed 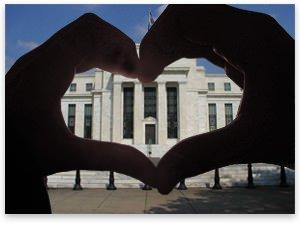 I recently took time from criticizing the actions of the Federal Reserve System (and associating with my "End the Fed" friends) to attend a conference in New York City that was hosted by none other than the Federal Reserve Bank of New York. As much as anything, I was curious as to what goes on at a Fed conference, and it also gave me the chance to visit friends in the area and to appear on Judge Andrew Napolitano's show, Freedom Watch.

The conference, "The Federal Reserve in the 21st Century," is an annual affair in which New York Fed economists and others explain "the mission and the dual mandate" that Congress has given to the central bank, and also to explain — or try to explain — the Fed's role in the current economic downturn. To be honest, it was an interesting two days of lectures and discussion, and the food was very good.

For all of the issues of security — and on the first day, we had to stand outside in a security line in the rain — it was hardly like being at an airport. The Federal Reserve police were friendly and helpful (unlike their TSA counterparts), and the staff members I met — from the conference organizers to the people who organized and prepared the wonderful meals — were sincerely warm and went out of their way to help. In other words, on a personal level, I was impressed, and I appreciated the professionalism and courtesy with which we conferees were treated.

My problem was not and is not with the conference or the people involved; my problem is that they never will "get it," nor will they understand why the economy is where it is and what the Fed's role is in putting it there. From what I could tell about many of the other college professors attending the conference, they had no idea, either. Like the attempts at the nearby "Ground Zero" zone to build a "Freedom Tower" that is 1,776 feet high, it seemed to me that people were wanting to believe the impossible, no matter what the real cost might be.

Before dealing with some specific things that we covered in the sessions, I want to explain the most important piece of knowledge I came away with: The Fed economists and their supporters really believe — truly believe — that they are the rescuers of our economy, and that the actions of Ben Bernanke, from the Fed loans to businesses to the Wall Street bailout and generally showering the world with dollars, actually kept the downturn from getting much worse. As they see it, the problem was that the economies of the world were facing liquidity crises, and the Fed provided "liquidity" to nearly every entity that asked for it.

The notion that Federal Reserve actions and policies might have helped to fuel the disastrous twin bubbles (stock-market and housing) that touched off the boom-and-bust cycles clearly did not exist in that building on Liberty Street in New York's Financial District. Instead, the message was that the Fed serves the economy the same way firefighters serve a community: putting out fires caused by someone else.

Conferees heard often about the Fed's "dual mandate" from Congress to (1) provide "price stability" and (2) help ensure "full employment" in the US economy. Not surprisingly, we citizens get neither, although the leaders of the Fed assure us that they have the answers we need to hear and the ability to pull yet one more rabbit out of the hat.

Although there were a large number of presentations, I will deal with two of them, the first being a talk on the housing boom and bust, and the second on why "monetary policy" really can increase "aggregate demand" at a time when the economy supposedly languishes in what Paul Krugman insists is a "liquidity trap." The former had a lot of good information, but lacked the critical element of causality. The second was, well, pretty bad, but really provided a window into the mentality that drives Fed policies.

One of the things that really hit me as I sat through the "housing boom" session was the utter lack of examination of the deeper cause of the whole mess. While the speaker mentioned things like the lack of standards for borrowers who were taking on huge amounts of debt (on which many would default), the larger issue that he pictured was something akin to a natural disaster, like a tornado or a meteor hitting the earth.

No, I don't mean that he likened the damage done by the boom-bust cycle to a natural disaster. I am referring to his view of why it happened: why standards were dropped, and why the government saw fit to push people into home ownership. According to him, it just happened, as though it were a natural event.

But there is nothing "natural" about shelling out a $500,000 mortgage to a family making less than $50,000 a year. The whole thing was absurd, and anyone stepping back and taking a hard look would realize it. So how did it happen? It was very clear that the speaker was not interested in that question.

And why should he be interested? The Fed played a major role in the fiasco, and if there were any consistent message over the two days of the seminar, it was that while the Fed was not infallible, its error was only that it was fooled just like the rest of us. Fed economists and decision makers, of course, have only the interests of "the people" in mind.

The second session dealt with the Fed's ability to increase "aggregate demand" during this downturn. According to Keynesians like Paul Krugman, the economy is currently in a "liquidity trap," in which the "tools" of "monetary policy" — keeping interest rates artificially low and the Fed stocking up bank reserves to enable more lending — are ineffective. As Krugman likes to say, interest rates are near the "zero bound," so even if the Fed lowers interest rates, it won't stimulate more borrowing.

Thus, the Keynesians claim that the only way to break this downward cycle is for government to borrow and spend until the economy gains "traction" (as Krugman calls it), and the government then can go back to doing whatever governments are supposed to do. However, said the Fed economist, never fear, for there are plenty of ways for Fed policies to "stimulate" more "aggregate demand."

One questioner, a professor from Dartmouth College, disagreed. "When will someone here admit the obvious, that we are in a liquidity trap?" he asked, to some applause. I cannot recall the economist's response, but as far as I was concerned, it was akin to the blind man leading the other blind man into the ditch.

The problem is that the entire Fed program was based upon the belief that the central bank really creates wealth. If it were not for the Fed, they argued, the economy would be stuck in mud and unable to free itself. Yes, unemployment is high, and food prices and gasoline prices are skyrocketing, but hey, "core inflation" is low; so unless you have to buy food or fuel, you won't notice inflation at all.

In case readers are wondering, no, I did not ask any questions or make public comments. It would have done no good, as trying to explain anything from an Austrian point of view only would have enraged the economists there; and it was a long way down to the ground from the window of the 12th floor of the NY Fed building.

In the end, I could conclude only one thing: those at the Fed truly are clueless about the real harm they have caused. Had Ben Bernanke followed the advice of Murray Rothbard instead of the advice of Milton Friedman on government policies during a severe downturn, he would have refused to try to "reflate" the economy after the collapse of the housing bubble.

Had Bernanke understood Rothbard, he would have known that a government cannot print an economy into prosperity. He also would have understood that inflation is not a solution — it is the problem.

We have to live with Bernanke's decisions, and the lessons will be painful, even if most people don't understand what they are supposed to be learning. And the people least likely to learn any good lessons at all are those who are employed by the Federal Reserve.