Store 'em If You Got 'em 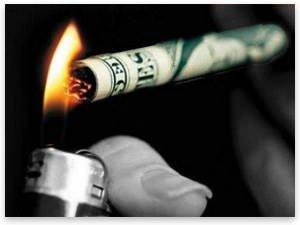 With the Federal Reserve's daily debauching of the dollar, it's hard for a person to know in what form they should store their savings. Despite the machinations of the Fed, the demand for US dollars continues to be relatively high. As Murray Rothbard noted in The Mystery of Banking, the public-expectations component of the demand for money doesn't change suddenly and is based upon the record of the immediate past. These expectations are sluggish in adapting to new conditions.

We seem to be in phase one of Ludwig von Mises's outline of the typical inflation process: prices aren't rising nearly as much as the money supply. The public still has deflationary expectations. And why not? After all, the folks at the Bureau of Labor Statistics say that retail prices as measured by the consumer price index fell 2.1 percent this July from a year ago. Meanwhile, the M-2 money supply has increased by 8.7 percent year over year. The average Joe and Jane on the street don't care one whit that the Fed's balance sheet has exploded in size over the past year. And if the government says prices are going down, well, who are they to argue? Quantitative easing doesn't sound all that scary. CNBC says the financial system has been saved and Bernie Madoff is in jail — all is well.

But a few savvy folks are taking Bastiat's cue that it's more important to understand what is unseen as a result of economic policies, as opposed to just what is seen. While the fractional-reserve money-manufacturing process is currently broken in the commercial banking sector — because credit-worthy borrowers are hard to source and crumbling real-estate values have bank regulators closing a handful of small banks each Friday evening — the Federal Reserve has expanded its balance sheet to make up the difference and bailed out the large-money-center banks in order that the whole apparatus doesn't collapse.

So instead of allowing the market to provide a healthy cleansing deflation, the Fed, the Treasury, and bank regulators are fighting valiantly to keep the fractional-reserve-bubble machine operating, with the ultimate result likely to be inflation and possibly hyperinflation. "As inflationary pressures mount anew and the financial markets increasingly shun US Treasuries," wrote John Williams on his Shadow Government Statistics website this past January,

an inflationary depression can evolve quickly into a hyperinflationary great depression. Although hyperinflation became inevitable in the last decade, the onset of the process just recently was triggered by Fed and the Treasury actions in addressing the systemic solvency crisis.

In anticipation of the coming inflation, more than a few folks are squirreling away gold coins, and, because of that demand, these coins are still selling at inflated premiums and the spot price of the yellow metal continues to hang stubbornly above $900 per ounce. But gold may not be the only thing to hoard.

Interestingly, when asked if there is anything else a person can store their savings in, globetrotting investor Doug Casey recently offered up an item that has historically been used as money — cigarettes. "Well, they keep raising the taxes on cigarettes — a pack now costs $10 in some places in the US, that's 50 cents per individual cigarette," Casey says.

Cigarettes, despite flunking the "durability" test, meet all the other criteria to make them a good monetary instrument. They are generally marketable, despite the constant attacks on their use as being unhealthy. Cigarettes are divisible, recognizable, (somewhat) homogeneous, and, due to the increased taxation, fairly stable in value and have a high value per unit weight. In fact, a 7-Eleven at the Jersey shore recently advertised selling cigarettes priced "at the state minimum."

Cigarettes are so valuable that they are being stolen by the truckload to be sold in high-tax states — like New Jersey, New York, and Washington. But individual counties also ladle taxes on each pack leading to smuggling within a single state with varying county tax rates, reports the Wall Street Journal. "It's a big business and it's getting horribly bigger," Paul Carey III, enforcement coordinator for the Northern Virginia Cigarette Tax Board, told the Wall Street Journal.

As in the case of counterfeiting, states don't take cigarette bootlegging lightly. Undercover agents for the New York State Department of Taxation and Finance arrested 18 people, including two 7-Eleven operators, for buying untaxed cigarettes. Smugglers are even willing to trade cocaine for cigarettes. "That tells you about the profit margin they saw on cigarettes," the ATF's Edgar Domenech told the Wall Street Journal.

R.A. Radford famously wrote in his November 1945 Economica article "The Economic Organization of a P.O.W. Camp,"

Most trading was for food against cigarettes or other foodstuffs, but cigarettes rose from the status of a normal commodity to that of currency.

Radford explained that each barracks had an "Exchange and Mart notice board" where sales and wants were posted. Over time all transactions were recorded in cigarettes with the price of smokes "tending to equality throughout the camp, although there were always opportunities for an astute trader to make a profit from arbitrage."

In his amazing account, Radford recognized that cigarettes preformed the functions of money nicely especially "as a measure of value and as a store of value." Some prisoners, as many kings had before, even "clipped or sweated [cigarettes] by rolling them between fingers so that tobacco fell out." With the currency value of all cigarettes the same, more popular cigarettes were saved or smoked, while poorer quality cigarettes were used for trading, just as Gresham's law would dictate.

When cigarette supplies were interrupted, the amount of currency declined, transactions dried up, and prices fell. But when a Red Cross shipment of several hundred thousand cigarettes arrived over a short period of time, "Prices soared, and then began to fall, slowly at first but with increasing rapidity as stocks ran out, until the next big delivery."

The Fed has essentially created the biggest shipment of currency ever, but the crippled banking system hasn't yet delivered it to our prison camp. When it arrives, it might be handy to have some spare smokes around to trade with.