GET NEWS AND ARTICLES IN YOUR INBOXPrint
A
A
Home | Mises Library | The Sphinx Speaks! 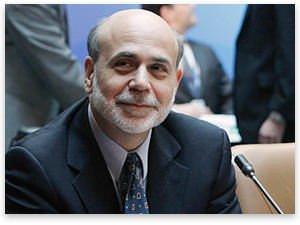 The big financial news this week was the Federal Reserve's first press conference. The financial press and bloggers have already parsed Bernanke's every last syllable, but I'll make some observations that I haven't seen elsewhere.

Why Do We Care What "The Bernank" Has to Say?

At one level, it's absurd that the entire world is hanging on the words of Ben Bernanke. He has been wrong at literally every major point in the housing bubble and then crisis. So why should we care about his predictions concerning the economy or his recommendations for how to end the slump?

The answer, of course, is that the Federal Reserve has the power to destroy the world economy. People look for meaning in each of Bernanke's semicolons because they might give a clue to the Fed's next policy move. The awesome power of the Fed has made the rest of us behave like the terrified family living with that creepy kid from the Twilight Zone.

In homage to Orwell, Fed officials often refer to their (roughly) 2 percent goal of price inflation as "price stability." To his (or his speechwriters') credit, Bernanke addressed this apparent contradiction directly. (Note that the quotations in this article are time stamped with respect to this YouTube video of the press conference.) Here's Bernanke at about 4:20:

At 1.7 to 2.0 percent, the mandate-consistent rate of inflation is greater than zero for a number of reasons. Perhaps most important, attempting to maintain inflation at zero would increase the risks of experiencing an extended bout of deflation, or falling wages and prices, which in turn could lead employment to fall below its maximum sustainable level for a protracted period. Hence the goal of literally zero inflation is not consistent with the Federal Reserve's dual mandate.

Bernanke's analysis is quite conventional; the typical view among most economists is that falling prices are far worse than rising prices. Although common, this view has surprisingly little basis in reality.

One argument says that falling prices are bad because they set in motion a snowball effect. Consumers expect prices to fall, so they postpone their purchases, causing prices to fall even more. But that could just as well show the problem with price inflation: consumers expect prices to rise, so they accelerate their purchases, causing prices to rise even more. On that criterion, there's no reason to prefer inflation over deflation, except for the (incorrect) Keynesian view that "spending" per se is a good thing and is what drives the economy.

Another problem with the standard fear of falling prices is that we see that its logic fails in the computer industry. Every computer shopper knows full well that if he postpones his purchase for a year, he will get a better computer for the same amount of money. But so what? Did I just "prove" that the computer industry can't expand, because nobody ever bites the bullet and makes a purchase?

Historically, there were long stretches in US history when prices gently fell and wages remained stable. This price deflation didn't lead to disaster; it was consistent with real economic growth. People associate "deflation" with the awful Great Depression, but most don't know that the Consumer Price Index steadily fell (albeit much more gently) from late 1925 through 1929, in the midst of the Roaring Twenties — hardly a time associated with economic stagnation.

Once people's expectations adapted to the new reality, a system of sound money that maintained its purchasing power would actually foster greater economic growth. People could confidently make longer term business plans, and wouldn't need to engage in various hedging strategies to protect themselves from currency debasement.

At about the 6:50 mark Bernanke said, "The projected decline in the unemployment rate is relatively slow largely because economic growth is projected to be only modestly above the trend growth rate of the economy."

This type of claim is typical, and it is also nonsensical. Mainstream economists talk as if "GDP" is this external thing that expands or shrinks based on the electric prods of the government and central bank, and gosh if it could just grow fast enough, it would pull employment along for the ride.

In reality, you need workers (and other resources) to produce stuff, not vice versa. If an earthquake kills half the workforce, then (real) GDP is going to plummet because there are half as many people going into the factories and offices.

Going the other way, if the government and Fed would stop interfering with the market's natural recovery from the housing bubble, then wages and prices would adjust to their correct levels and businesses would start hiring again. We would then see measured GDP naturally expand.

In this context, Bernanke's statement above is analogous to a meteorologist declaring: "We expect the blizzard to cease by Saturday, because we are projecting a sharp decline in snow-plow activity."

We Have Nothing to Fear but Inflation Itself

Around the 9:50 mark Bernanke engaged in a tautology masked as economic wisdom:

[T]he short-term increase in inflation has not prompted the Committee to tighten policy at this juncture. Importantly however the Committee's outlook for inflation is predicated on longer-term inflation expectations remaining stable. If households and firms continue to expect inflation to return to a mandate-consistent level in the medium term, then increased commodity prices are unlikely to induce significant second-round effects, in which inflation takes hold in non-commodity prices and in nominal wages. Thus, besides monitoring inflation itself, the Committee will pay close attention to inflation expectations and to possible indications of second-round effects.

I admit I am being slightly unfair to our noble chairman, but his statement above roughly translates into "Inflation won't get out of hand until people realize it is getting out of hand. But we are watching it, and right now it's not out of hand, so we don't expect it will get out of hand. If people thought I would let this blow up in our faces, I would already be fired."

Don't Worry, Bernanke Has His "Tools"

At the conclusion of his prepared remarks (at the 11:00 mark), Bernanke said,

The Committee remains confident that it has the tools that it needs to tighten monetary policy when it is determined that economic conditions warrant such a step. And in choosing the time to begin policy normalization, as well as the pace of that normalization, we will carefully consider both parts of our dual mandate.

I've have written before on my lack of confidence in Bernanke and his tools. Specifically, the problem is that he is buying into the Phillips-curve analysis that I thought had been thoroughly discredited by the 1970s stagflation of the United States. As the case of Zimbabwe recently illustrated — when unemployment was some 90 percent while price inflation was rather high as well — a country can suffer massive inflation even with "slack resource utilization."

No, I'm not suggesting that the United States will look like Zimbabwe next year. But Bernanke & Co. keep acting as if it will be an obvious matter of when to turn off the monetary spigot: namely, when the recovery picks up steam, unemployment falls, and "core inflation" starts rising.

Yet what happens if, say, the dollar and stock market both crash more than 30 percent in one week, oil shoots up to $175 per barrel, monthly CPI rises 8 percent, while unemployment jumps up to 12 percent? What would Bernanke do in that scenario? Thus far, he has been talking as if it were impossible. His response (around 14:25) to a question about removing monetary easing certainly didn't tackle this type of double-threat scenario.

At around 18:05, a Wall Street Journal reporter asked about gas prices. Bernanke replied that the rising price of oil was driven by emerging-market demand and the supply interruptions from the hotspots in the Middle East.

It's true, if we were just looking at one particular commodity — such as oil — then it would be hard to disentangle the effects of individual market conditions from the overall effects of monetary policy.

But Bernanke would have a harder time explaining why commodities across the board are rising in price, particularly gold and silver, which are traditional hedges against currency depreciation. The following chart (from this website) shows an index of oil prices in terms of US paper dollars and in grams of gold:

As the chart indicates, from the late 1940s through the early 1970s, the price of oil as measured in US dollars or grams of gold moved in lockstep. But then starting in 1972 — shortly after Nixon closed the gold window — the two lines started diverging, with the gulf widening dramatically in recent years. Although the chart unfortunately ends in December 2007, the pattern since then is largely the same: Oil shot up more and crashed harder in 2008, but both oil and gold have risen tremendously since the advent of Bernanke's extraordinary programs to "provide liquidity."

Call me cynical or paranoid (or both), but I actually try not to get too worked up about Ben Bernanke's public statements. I really don't think powerful bankers would go to all the trouble of establishing a cartelization device only to hand over the keys to a Princeton professor.

Nonetheless, it's always amusing to actually analyze the justifications the nominal Fed chair gives for the policies that cause boom-bust cycles and erode the purchasing power of the dollar.

I can only hope that Bernanke is as smart as his two predecessors and knows enough to resign just before the stock market crashes again.