GET NEWS AND ARTICLES IN YOUR INBOXPrint
A
A
Home | Mises Library | Social Security: The Long Slow Default 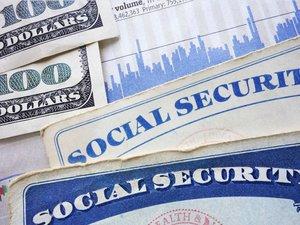 When an investor buys an annuity or another retirement product from an insurance or mutual fund company, the contract is constant and enforceable through the United States court system. When a United States taxpayer is forced to pay for a government backed retirement system such as the Old-Age, Survivors, and Disability Insurance program (OASDI) — also known as Social Security — the “contract” can be, and is, changed on a regular basis by the United States government, and those changes are generally not to the benefit of the taxpayer.

The way that Social Security benefits are calculated is complicated, and can, of course, be modified at any time.

where the Average Indexed Monthly Earnings (AIME) is currently the average of the Social Security recipients top thirty-five years of income during his lifetime divided by 12.

Benefit Cuts Since the 1970s

By the late 1970s, it became obvious that the Social Security system was going to have significant solvency problems since the ratio of workers to retirees decreased from around 40-to-1 in 1945 to around 3-to-1 in 1980, and most of the money paid into the system had been spent on other government programs.

Payroll taxes were therefore increased, and a series of changes were made to the Primary Insurance Amount (PIA) payment formula to cut the benefits that Social Security enrollees would receive.

The PIA formula before 1979 was even more complicated than the one used in 2015. It had ten bend points, but gave more credit to high income workers. According to Robert J. Myers in his book Social Security, the changes in the benefit formula in 1979 resulted in, on average, a 7 percent reduction in monthly Social Security payments for new retirees. Under that current benefit formula, if a Social Security enrollee has a life-time income over $2 million, he will very likely have a negative return on his investment. For lifetime incomes between $0.5 million and $2 million, the enrollee has a chance to break even. Enrollees with a lifetime income less than $0.5 million have a good chance of still benefiting from the Social Security system. The number of years included in the earnings base (the number of years of income averaged to determine the monthly benefit payment) was gradually increased from twenty-three years, for people born in 1917, to twenty-nine years for people born in 1923 to thirty-five years, for people retiring in 2015.

For mothers who took time off from their career, people who spent a long time in graduate school, and people whose income was much larger during later parts of their life, this resulted in a significant decrease in benefits. (See The Social Security Book by Jack and Erwin Gaumnitz.)

Using the CPI to Keep Payments Down

Since the 1970s, the AIME used to determine the PIA has been indexed using the Consumer Price Index (CPI). So the higher the CPI, the larger a recipient’s monthly Social Security benefits will be. Social Security benefits for current retirees are also increased annually by the CPI. This means that one way the government can lower benefit payments is by under-estimating the inflation rate. The Bureau of Labor Statistics (BLS) has redefined how the CPI is calculated several times since the 1980s, lowering the CPI in each case. According to economists at Shadow Government Statistics, the CPI currently underestimates the inflation rate by at least 4 percent per year. If this is the case, Social Security recipients receive a 4 percent reduction in their buying power each year.

“Mini-Defaults” in the Social Security System

The US government knows it cannot keep up its end of the original Social Security bargain. So, to address its insolvency issue, the federal government simply responds by reducing benefits while increasing taxes. Increasing the retirement age, for example, is an easy way to reduce benefits.

According to the Social Security Administration, by 2033 future payroll taxes will only cover around 77 percent of estimated benefits. It is therefore likely that even further benefit cuts and tax increases will occur in the near future. Increasing Social Security tax rates from 12.4 percent to 15.5 percent and eliminating the taxable maximum (i.e., making all income subject to Social Security taxes) is currently being considered. Other tax increases being proposed include taxing contributions to flexible spending accounts and creating a national Value Added Tax (VAT).

Social Security has long been sold to the public on the notion that what a worker will receive back is what he or she pays into the system. For decades, however, the government has been changing the terms of this “agreement” as part of an effort to avoid outright default. This long, slow method of piecemeal default, however, is likely to continue.

Kirby R. Cundiff, Ph.D. (cundiffnsu@yahoo.com) is the finance program coordinator and associate professor of finance at Park University in Kansas City, Missouri. He is a chartered financial analyst and a Certified Financial Planner™.

Social Security has never involved legally-binding contracts between the government and those who allegedly “pay in...

Slaves to the Tax State

The rich find ways around the tax eaters, writes, Kirby Cundiff, by moving income and capital around and lobbying...