A Skyscraper Curse with Chinese Characteristics 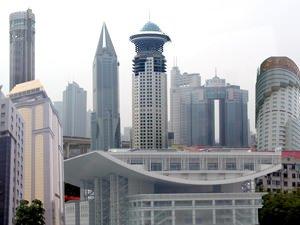 The Mises Institute recently spoke with Mark A. DeWeaver about the Chinese economy, malinvestment, booms and busts, and his new book Animal Spirits with Chinese Characteristics.

Mark DeWeaver, PhD, manages Quantrarian Asia Hedge. He lived and worked in China from 1985-1994, first as a student at Sun Yatsen University in Guangzhou, and later as a research analyst for Peregrine Brokerage (now part of BNP Paribas).

DeWeaver: China has well-developed product markets but can hardly be called capitalist, given that most of the means of production are at least partially state owned.At the same time, the Chinese economy has also never really been centrally planned. Most economic decision making takes place at the local-government level, much as was the case during the Maoist period. The system might be best described by the seeming double oxymoron, capitalism with limited private ownership, socialism with limited planning.

Mises Institute: What is the connection of its monetary and foreign exchange rate policy to its trade policy? Is this just a modern form of mercantilism or is there something unique about the China situation that we should be aware of?

DeWeaver: Yes, Chinese monetary and trade policies are clearly a modern form of mercantilism. The central bank’s interventions in the foreign exchange market result in an undervalued exchange rate, which in turn helps to generate China’s balance-of-payments surplus with the rest of the world. In China, this policy appears to be primarily motivated by the desire to strengthen state control over the economy by reducing the country’s exposure to the vagaries of international capital flows.

Mises Institute: In your book Animal Spirits with Chinese Characteristics, what is it that makes China different?

DeWeaver: The Chinese investment cycle is different because it is primarily a state-sector phenomenon. Booms originate at the local-government level, where officials are always willing to promote investment for the sake of boosting GDP growth within their jurisdictions. Busts are imposed by the central government, which eventually has to use administrative measures to bring expansions to an end for the sake of suppressing inflation and controlling the state-owned banks’ non-performing loans.

Mises Institute: Will the new political leadership in China change economic policy in any fundamental way?

DeWeaver: A fundamental change in economic policy would have to involve the privatization of state-owned assets and a real commitment to the rule of law. Neither of these are even remote possibilities because they would undermine the Party’s hold on power. The leadership’s plans, like those of the Soviet government during the 1980s, call for strengthening the existing system, not genuine reform.

Mises Institute: How do they engineer double-digit growth rates? We hear of ghost cities, excess manufacturing capacity, and forests of skyscrapers being built. Are double digit growth rates sustainable? If not, would the problems emerge from internal or external forces?

DeWeaver: In the 1980s and early 90s, high growth rates were primarily the result of economic liberalization. Since the late 90s, however, Beijing has had to rely increasingly on state-led investment to prop up GDP growth. By now, the efficiency of this investment has declined to the point where it is no longer possible for the economy to grow at double-digit rates. China has reached the limits of investment-led growth, but will be unable to transition to a productivity-led model as long as the economy continues to be dominated by the state.

Mises Institute: If the economy were to slow down, what would be the economic and social consequences? Can they engineer a soft landing?

DeWeaver: The central government can prevent a crash but will not be able to avert a long-term decline in growth rates. Ultimately, there will have to be a transition to private ownership — probably via Russian-style “nomenklatura” privatizations, which ensure the support of elite groups by allowing them to take over state-owned property. As was the case in Russia and Eastern Europe, China’s transition is likely to be chaotic and unfair but non-violent.

Mises Institute: If the economy were to crash, does the Chinese government have the ability to “pull a rabbit” out of its hat and save the Chinese economy? If so, how would they do it?

DeWeaver: Relaxing supervision of local-government investment and the banking system is the only rabbit the central government has ever been able to pull out. This was the policy following the 2008 global financial crisis, for example. The result would be yet another local-government led investment boom, followed by even higher levels of excess capacity and non-performing loans at the state-owned banks.

Mises Institute: In terms of predictions, China has nearly completed its tallest skyscraper. Do you feel that this will result in a correct “signal” of the Skyscraper Curse and “cause” an economic crisis in China?

DeWeaver: Yes, I think the crisis is already here. China is not only home to the world’s tallest building but also to 87 percent of all buildings over 152 meters now under construction worldwide. This skyscraper craze is but one example of the massive misallocation of resources that has resulted from indiscriminate investment promotion by local governments.

Mises Institute: We have also read that they have broken ground for a project to build the world’s tallest skyscraper and that they will complete it in record time. This would result in a world economic crisis signal. What have you heard about this and do you think they will complete the project?

DeWeaver: This project, known as Sky City, was halted a few days after the groundbreaking because the developer had failed to get the necessary government approvals. While the local government no doubt supports it, I think the central government is unlikely to allow it to go ahead. Beijing’s view is evident from a recent editorial in the People’s Daily, which called Sky City “impractical” and “irresponsible” and even cited [Andrew] Lawrence’s finding that record-breaking skyscrapers are often harbingers of economic crises.

Check out www.markdeweaver.com for more commentary by this author. Mark A. DeWeaver, PhD, CFA, is a cofounder of the fund management company Ithaca Advisors, LLC, and the author of Animal Spirits with Chinese Characteristics: Investment Booms and Busts in the World's Emerging Economic Giant.