Security Without a State 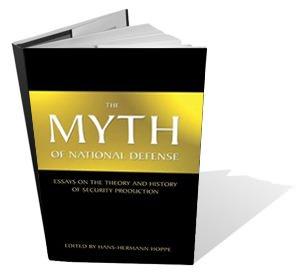 The Bush administration's invasion of Iraq provides one further confirmation, if any were needed, of Randolph Bourne's dictum, "war is the health of the state." Faced with so massive an instance of aggression, the question arises: can we do without the state altogether? Its elimination would end the principal source of destructive violence in the world.

However appealing this line of thought may be, few are willing to go all the way with it. No doubt the depredations of the state are an ever-present menace, but how can we possibly get along without this institution? Would not a stateless libertarian community easily fall prey to the first state that chose to attack it?

History shows that no civilized community of substantial size can exist without a state; and arguments from political theory and economics show that the state is a necessity for adequate defense. The state may be evil, but it is a necessary evil.

The contributors to the Myth of National Defense dissent entirely from the line of thought just sketched. They raise a host of objections to the conventional view — in my opinion with complete success. The reader of this brilliant volume will see that every claim made for the state in the preceding two paragraphs is false.

Jeffrey Hummel succinctly presents the argument that history shows the necessity of the state:

If private defense is better than government defense, why has government kept winning over the centuries? Indeed, the State's military prowess has more than seemingly precluded the modern emergence of any anarcho-capitalist society.…

How can they [radical libertarians such as Rothbard] attribute the origins of government to successful conquest and simultaneously maintain that a completely free society, without government, could prevent such conquest? (pp. 276, 278)

Both Hummel and the team of Luigi Marco Bassani and Carlo Lottieri endeavor in differing ways to respond to the argument just posed. According to Hummel, the onset of the Agricultural Revolution, beginning around 11,000 BC, created a large, wealthy, and sedentary population. The people who benefited from this revolution were conquered by marauding bands who sought benefits for themselves. In these conquerors is the origin of the state.

But why did the large agricultural population not make use of its superior numbers to expel the invaders? Hummel maintains that even though it was to the advantage of nearly everyone in the subject population to rebel, the costs of resistance to particular individuals were too high.

If someone resists the state, he is liable to be killed.

Though he would welcome the departure of the invaders, each individual will not rationally risk his life and possessions to expel them. He will instead hope that some other person or group will resist, in which case he benefits without risk. Since everyone will think in this fashion, there will be no effective resistance.1 "The free-rider problem, long presented by economists as a normative justification for the State, is in reality a positive explanation for why the State first arose and persisted" (p. 280).

Hummel has defended a version of the conquest theory of the state; but does not his very explanation render impossible a successful resistance to the contemporary state? Will not the free-rider problem once more explain the persistence of the state?

Hummel has an ingenious response. Since the Industrial Revolution, wealth has become much more important in military conflict. This gives stateless groups a better chance of success than before, given the undoubted fact that the free market promotes economic growth more efficiently than a state-controlled society.

But what about the free-rider problem? Hummel maintains that it does not totally rule out collective action; it can be overcome if people have enough commitment to the rightness of their cause. Joseph Stromberg puts the matter well:

As for "free riders," the American Revolution tells the tale. Had we sorted all that out, we would never have fought. Hummel throws a great Rothbardian "So What?" at the problem. He notes that, without free-riding, civilization would not exist. (p. 237)

Bassani and Lottieri respond in a different way. They reject the conquest theory of the state, as well as other accounts that postulate for the state a vast antiquity. Quite the contrary, they contend that the state began only when the Middle Ages came to an end. Not until then did people suffer from that baleful development, a centralized authority holding a monopoly of force over a national territory.

Many libertarians have failed to grasp this point, they contend, because they have been too much influenced by Franz Oppenheimer and his followers. These writers contrast the economic means of gaining goods and services, which benefits everyone engaged in it, with the political means, in which some forcibly take goods from others.

The contrast is no doubt very useful, but Bassani and Lottieri find in it a source of error. The political means must not be equated with the state. To think otherwise makes every bandit a state. While the state may be a criminal gang, not every criminal gang is a state.

Once we grasp the modern origins of the state, is not our task of resistance to it made easier? No longer must we view the state as fixed and irremovable. If it did not always exist, then we have some hope of removing it.2

If history does not require us to accept the necessity of the state, what of political theory? Hobbes argued that without a state, individuals would find themselves in constant conflict. In order to avoid the "war of all against all," must not everyone surrender his arms to the sovereign, who will then protect us? Hans Hoppe finds this argument less than convincing:

[According to Hobbes,] in order to institute peaceful cooperation among themselves, two individuals, A and B, require a third independent party, S, as ultimate judge and peacemaker.… To be sure, S will make peace between A and B, but only so that he himself can rob both of them more profitably. Surely S is better protected, but the more he is protected, the less A and B are protected from attacks by S. (p. 336)

Hobbes fails to show that the sovereign improves on the state of nature.

Hoppe's excellent point strikes at the heart of the Hobbesian justification of the state, but the question raised earlier recurs. Even if the state acts as a predator, is it not needed for defense against other states?

Here we must turn to arguments from economic theory. It is often alleged that national defense is a "public good" that the market cannot supply in adequate quantity. Both Larry Sechrest and Walter Block dissent from this orthodoxy. Why should we think that defense is a single good that must be supplied on an equal basis to everyone resident in a nation? "It is neither impossible to exclude nonpayers nor is it true that bringing in an additional person under the safety umbrella costs no additional resources" (p. 323). With his customary imaginative flair, Block offers numerous ingenious examples to support his challenge to the standard view.[3]

If these authors are right, an anarcholibertarian society could provide for defense in an entirely adequate way. Joseph Stromberg strengthens the case with a vital point. It by no means follows that a free society must match the bloated expenditures of the Leviathan state in order to defend itself effectively.

I assume that minimal states and anarchies can do without nuclear bombs, cruise missiles, stealth bombers, and expensive "systems" suited to world conquest or universal meddling. As for the "force structure" of mere defense, I believe we would see some rough combination of militias and "insurance companies" — perhaps not as mutually exclusive as we think — with resort to mass-based guerrilla war, however and by whomever organized, in extremis. (p. 237)

The argument for libertarian defense rests on two points. First, a libertarian society would have a much less ambitious agenda than states in the contemporary world. Murray Rothbard, with characteristic incisiveness, makes clear the drastic limits on the circumstances in which war is justified. Specifically, there is no universal mandate to impose a good society all over the world: nations must mind their own business.

An especially dangerous variant of the policy that Rothbard opposed wishes to spread democracy to all and sundry. As Erik von Kuehnelt-Leddihn and Gerard Radnitzky document to the hilt, this is a recipe for disaster. Democracies, swollen with self-righteousness, tend to wage unlimited wars that ignore humane restraints.

Guido Hülsmann carries the argument one step farther. Just as expansion of the state is a mortal sin even in pursuit of "good" foreign policy goals, so must one shun the use of state power to achieve domestic reform. He contends that 18th- and 19th-century classical liberalism failed because it resorted to force to impose the goals that its advocates found desirable. "Rather than curbing political power, they [classical liberals] merely shifted and centralized it" (p. 379). Instead, libertarians ought to rely on peaceful secession.

Second, as both Stromberg and Hülsmann emphasize, there is good reason to think that if a libertarian society found itself the victim of invasion, guerrilla warfare would prove a successful response. Stromberg concludes,

We start from the truism that defense has the advantage.… And once people are driven to guerrilla tactics defeating them raises the ratio of attackers to defenders to somewhere between 4-to-1 and 6-to-1, or higher. Successful "pacification" and occupation may require a 10-to-1 superiority. (pp. 235–36)4

This revolutionary book requires us to jettison the assumptions about defense that nearly everyone takes for granted. The notion that only the state can provide an adequate defense is but one more statist myth — perhaps the most dangerous one of all.