Sanders and His Followers Are Not Outliers 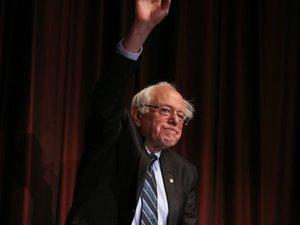 Depending on one’s point of view, Bernie Sanders either held his own or boosted his chances against perceived front-runner Hillary Clinton in Tuesday night’s Democratic presidential primary debate. His message clearly resonated with the live audience, particularly his statements about raising the minimum wage to $15 per hour, global warming, and government-mandated paid childcare leave.

Progressives are emboldened by Sanders, who reportedly draws upward of 20,000 people at events. He inspires them with his attacks on capitalism, happily calling himself a “Democratic Socialist.” And his economic plans, while a mess, appeal to their radical (and disastrous) notions of egalitarianism.

Happily, there are murmurs of discontent — progressives like to eat their own. His crowds skew overwhelmingly white and older, leading to allegations that Sanders suffers from a whiteness problem. His home state of Vermont is laughably un-diverse and prosperous, home to woodsy limousine liberals who like the idea of urban living more than the reality. But nobody ever lost a political race purely for hypocrisy — and while Bernie’s brand of socialism might fade with the Birkenstock Boomer crowd, Occupy Wall Street millennials stand waiting.

Regardless of whether Sanders ultimately secures the nomination, the size and energy of the Bernie phenomenon should not be underestimated. If anything, libertarians consistently misjudge the degree to which socialist thought is deeply rooted in the American psyche.

Like Sanders, millions of American progressives hold these deeply statist and authoritarian beliefs:

These ideas, and the people who hold them, are not outliers in America. There are millions of rank and file progressives, mostly registered Democrats, who believe exactly as Bernie believes. They may prefer to vote for Hillary Clinton purely as a tactical matter because they are unsure the country is “ready” for full socialism, or because they think Hillary has a better chance of beating the hated Republicans in the general election.

But average progressives and Democrats agree with Bernie Sanders across the board, whether they plan to vote for him or not.

Do average Republicans and conservatives agree with Ron Paul? Do most registered Republicans really advocate eliminating income taxes, abolishing entire federal agencies, repealing the Federal Reserve Act, ending all foreign interventions, and drastically downsizing the US military? Are most conservatives, in their hearts, radically anti-state? The answer is no. Most conservatives are only nominally less statist, often more corporatist, and almost invariably more militarist than progressives.

The reason is simple, though we tend to forget it: the twentieth century was a radically progressive century. Income taxes, central banking, social insurance schemes, demand-side Keynesian economics, and Wilsonian internationalism — all radical ideas — have become entrenched articles of faith over the past 100 years. When we talk about politics or economics today, we do so within a thoroughly progressive framework.

The entire progressive agenda of the last century, which would have sounded outrageous to the libertarian-tinged ear of the average American in 1900, is now merely the baseline from which all government action originates.

That’s why abolitionist libertarians are on the defensive in modern political discourse, while grandiose progressives are on the attack: the default position in American politics is for government to do something.

So we shouldn’t downplay or minimize the success of progressives in shifting the landscape dramatically in favor of the state over the past century. Progressives never went away, despite the rhetoric of Ronald Reagan or Milton Friedman or Bill Clinton. The era of big government is still here, and it always was.

So what should libertarians do, in an absurd progressive world obsessed with supposed global warming, inequality, racism, sexism, homophobia, transphobia, and privilege, ad nauseam?

The answer could fill a book, but let me suggest we start by freeing ourselves of the burdens of politics. Our battle is for hearts and minds, not votes. While Democrats and Republicans fixate on candidates and their supposed policies, libertarians are free to remain psychologically and emotionally detached from the whole sordid process.

And with that detachment comes freedom: the freedom to inspire, educate, and influence other people of good will without the divisive cloud of partisan politics creating suspicion and distrust. Once people know you’re not simply making arguments to support “your guy” — or any guy — they tend to view you more impartially and hence more favorably.