The Economics of Bernie Sanders 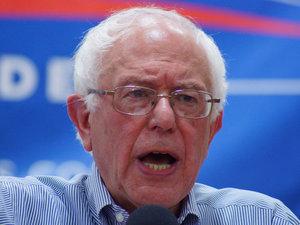 As the political campaign of Hillary Clinton continues to run aground, Democrats are flocking to the campaign of Bernie Sanders, the self-described “socialist” US senator from Vermont, who has been a fixture in that state for more than three decades. Not unlike the presidential campaign of Ron Paul, Sanders is drawing large, enthusiastic crowds who are very receptive to his message of increased state control of the US economy.

Obviously, when a person running a campaign based upon socialist principles is drawing attention and big crowds, we might ask just what does Sanders mean by “socialist,” and what would he do if he were elected president of the United States? To better answer that question, I am taking a closer look at what we would call the “economics” of Bernie Sanders.

What Do We Mean by “Socialism”?

Before looking at Sanders’s platform, however, I believe it is important to note that when socialists speak of “victories” in the economy, they are not talking about actual results, but rather political achievements in the forms of laws being passed that mandate certain policies. Whether or not these policies actually achieve what socialists claim will be accomplished is another story altogether, but results are irrelevant to socialists.

This should surprise no one because, after all, socialism is based upon political control of the economy. True (or at least original) socialists believe that state agents via the “magic” of their authority should allocate all resources to where there is the greatest need for them. Political representatives, not surprisingly, determine what constitutes the greatest need. The state would take ownership of all factors of production and then wisely determine the needs and how production of goods would fulfill them.

Ludwig von Mises in 1920 in his short work, Socialism (three years later expanded into a book), exploded the socialist myth by pointing out that in a world of scarce resources, economies needed private ownership, prices, profits and losses to determine where resources should be directed. The early years of the “experiment” of the Soviet Union proved Mises correct, and socialists then sought to redefine what socialism actually meant.

In the USSR, and later in China and North Korea, the state took ownership of factors of production, but tried to create a parallel economy by using shadow prices and production functions via the mechanisms championed by Polish communist Oskar Lange, who admitted that Mises had pointed out serious flaws in the original plans of socialists. We also know how that “experiment” turned out, which is why there no longer is a USSR, China has abandoned much of the economics of Mao, and North Korea is a failed state where most people live in grinding poverty.

But people like Bernie Sanders, while maybe not rejecting the old socialism spiritually, nonetheless have embraced a “socialism” in which government takes ownership of large portions of what has been produced by private enterprise and transfers wealth from one group of people to another. A look at the Sanders website spells out his brand of “socialism” that he says is based upon what Nordic countries like Sweden, Denmark, and Norway have done, levying high taxes with governments using that funding for social programs like medical care and other public welfare initiatives.

A number of people have pointed out that the Sanders “program” is not socialism per se, but rather is something based upon socializing the results of private enterprise, or what one might call secondary socialism. The Bernie Sanders regime would take control of some of the produce of private enterprise, as opposed to taking outright control of factors of production, which would remain in private hands. If this reminds one of the fascism of the 1930s, that is because Sanders is promoting a version of the governing models of Germany under Adolph Hitler and Italy under Benito Mussolini.

Having similar economic proposals to Hitler and Mussolini does not make Sanders either of those two men and it is important to emphasize that while Sanders regularly employs the powerful political tool of appealing to voter resentment of others, he is not advocating the kind of genocide that ultimately helped to characterize the fascism of Central Europe in the 1930s and 40s. Bernie Sanders is an economic nationalist, and economic nationalism was at the heart of European fascism, but we do not want to make unwarranted accusations against Sanders, either.

At the same time, I do not want to let Sanders off the hook. He promotes economic nationalism and has built his campaign upon resentment, the kind of which Henry Hazlitt wrote in 1966 in his famous, “Marxism in One Minute.” Hazlitt wrote:

The whole gospel of Karl Marx can be summed up in a single sentence: Hate the man who is better off than you are. Never under any circumstances admit that his success may be due to his own efforts, to the productive contribution he has made to the whole community. Always attribute his success to the exploitation, the cheating, the more or less open robbery of others. (Emphasis mine)

As one moves through the website for the Sanders campaign, there is plenty of resentment for others. First, there is the ubiquitous “One-Percent” that is the main focus of the typical Sanders stump speech:

This campaign is sending a message to the billionaire class: “you can’t have it all.” You can’t get huge tax breaks while children in this country go hungry. You can’t continue sending our jobs to China while millions are looking for work. You can’t hide your profits in the Cayman Islands and other tax havens, while there are massive unmet needs on every corner of this nation. Your greed has got to end. You cannot take advantage of all the benefits of America, if you refuse to accept your responsibilities as Americans.

While I would agree wholeheartedly that the US economy is in serious trouble, it is not because of the “greed” of billionaires. It is because the US government, through the Federal Reserve System, has created what David Stockman has called the “casino economy” that has substituted trading of sovereign debt and monetary manipulation for a real economy with interest rates that reflect actual economic fundamentals. Like the Bush and Clinton administrations before it, the Obama administration has promoted political entrepreneurship and demonized market entrepreneurship.

So, what does Sanders propose to “revitalize” the US economy? Here are some things listed on his website:

Notice that there is nothing in the Sanders platform that calls for “nationalization” of the means of production, nor does he propose to do away with the price system. In other words, Sanders’s vision of socialism is not what Mao or Trotsky or Lenin proposed, yet there is not one thing in the entire platform that would reverse the dangerous economic trends of the past decade.

Instead, Sanders proposes to direct huge amounts of resources in the direction of constructing something akin to a European welfare state. To put it another way, Sanders wishes to “turn back the clock” to create or promote social and economic structures that already have been undermined by the modern “sharing” economy.

If one reads Sanders’s platform from another perspective, it would be the New Deal. Indeed, there is nothing Sanders has written or said from the stump that would not be reminiscent of a New Deal rally (with the possible exception in appealing to black Americans, which was not part of the Democratic Party agenda in the 1930s, as well as Sanders’s appeal to furthering the Sexual Revolution). Bernie Sanders pushes an economic agenda that is frozen in time.

The problem, economically speaking, is that Bernie Sanders proposes nothing that actually would enable entrepreneurs to help bring about a true economic recovery. In Sanders’s world, entrepreneurs are parasites and employers are oppressors who seek to harm their employees, and wealth is defined by how much governments have in their treasuries.

If I could put the economics of Bernie Sanders into a nutshell, it would be this: Burden private enterprise with one directive after another, and then demonize it when it ultimately falls down under the awful weight of taxes, higher costs, and mandates. While many people believe that instituting the Sanders economic agenda would help turn the USA into another Sweden or Denmark, the more likely outcome would be turning this country into another Venezuela.

With a declaration of a fake crisis and twisting an obscure law, President Joe Biden has invoked a massive wealth...

The recent raid on Donald Trump's Florida home is one more event in Democrats and Never Trumpers' never-ending...