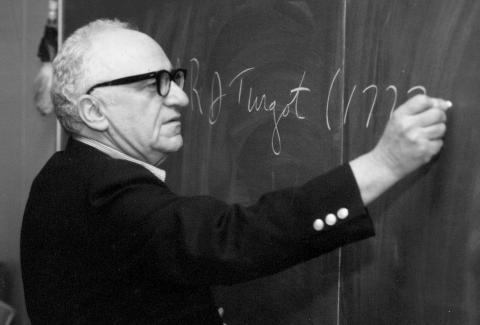 Shortly after Murray Rothbard’s death, the Durell Institute of Shenandoah University organized a conference on his contributions to monetary economics. The result was a collection of seven papers in a small book called The Contributions of Murray Rothbard to Monetary Economics, edited by Professor Clifford F. Thies. The volume has not received the attention it deserves.

The title of the first article, "Murray Rothbard and Jacksonian Banking," written by historian Leonard P. Liggio, is a bit misleading. Only the last four pages deal with Jacksonian banking. The core of this piece deals more with the ideological and religious roots of Jeffersonian and Jacksonian movements. Liggio thus states:

The traditionalist theologies—Lutheran, Anglican, Presbyterian, Jewish, Catholic—shared with economic science the knowledge of man’s unchanging nature. Therefore, they saw government interventions as the source of new temptations for corruption. . . . Special interests will be the movers of legislation, whatever the language of improvement used to justify it. Men will take advantage of government intervention to benefit themselves. That taxation is a form of robbery which should be limited to a very few necessary evils (p. 11).

This general statement of history departs from Rothbard’s observation concerning the religious roots of liberty, insofar as it clothes Lutherans and Calvinists (Presbyterians) in the same libertarian garments as the Catholic tradition. Rothbard  shows in his works (e.g., Economic Thought Before Adam Smith) that the origins of capitalist–libertarian–federalist thought and practice predate the Reformation. He specifically praises Catholicism for its critique of the nation-state and its embrace of entrepreneurship, among many other qualities, and, at the same time, criticizes Lutheran and Calvinistic religious movements for their roots in nationalism and their implicit opposition to commercial culture. It's fine to disagree with Rothbard here, but it is not unreasonable to ask that an author state the views of the person who is being criticized and explain why the author believes them to be incorrect.

Steve H. Hanke, in his article, "Argentina, the 'Germany' of South America?" explains why developing countries, for the sake of monetary stability, should accept a currency-board system with a relatively stable and convertible reserve currency, such as the U.S. dollar or gold, rather than an independent central bank. According to Hanke, "a currency board is the superior choice" because it lacks "arbitrary, discretionary control with regard to its monetary policy and its exchange-rate policy" (p. 23). In a typical currency board, as opposed to a typical central bank, one cannot inflate or finance spending. One earns seigniorage only from interest. There is no lender of last resort or balance-of-payments problem.

Unfortunately, however, Hanke does not mention that to eliminate these noxious phenomena of current monetary systems based on fiat money necessitates the establishment of a currency-board system with gold (or any other free-market money) as a reserve medium—that is, a 100-percent gold standard. A currency-board system with any other reserve medium—such as the U.S. dollar or the Euro—presupposes the existence of at least one state central bank with the same mischievous features that inevitably must spill over to the currency-board area. To use the words (cited by Hanke, p. 24) of Milton Friedman, an old proponent of currency boards for developing areas: "[T]o impose no barriers to the movement of money or of prices, wages, or interest rates. Such a policy requires avoiding a central bank."

. . . perhaps the foremost proponent of "hard money" of his time, advocating not only a gold standard, but a "100-percent gold standard." First, the dollar would be defined as an amount of gold; and, second, any paper money or bank account money not backed 100 percent by gold would be made illegal by the government as an act of fraud (p. 30).

Thies concludes with the following sentence: "But, bank safety, I would say, does not come from government regulation and guarantee of banks, but from private recognition of, and precaution against, risk" (p.40).

In these two statements, we can discern Thies’s strategy of holding his own view of banking and credit up against Rothbard’s "100-percent-reserve" position, which is said to be coercive and interventionist. Rothbard, however, would be the last to say that government interference with banking could guarantee safety to bank or depositors.  In no case would Rothbard restrict the individual freedom of men to embark on any exchanges of their titles to their property. What he would vehemently oppose, though, are associations, although absolutely voluntary, among two or more individuals that aimed at violent (involuntary) infringement of others' private property. And that is exactly what Rothbard saw as being inherent in the institution of fractional reserve banking.

Jeffrey Herbener and Mark Thornton’s "Adam Smith as Pragmatic Inflationist" is the most Rothbardian piece in this collection. The authors develop Rothbard’s revisionist criticism of the legacy of Adam Smith. They "come to the, seemingly unlikely, conclusion that Smith was a monetary crank and pragmatic inflationist . . . i.e., not against inflation on principle but favoring inflation managed by the state in conjunction with bankers" (p. 42).

[t]hat Smith would readily approve of the typical modern monetary regime: a fiat paper money  produced by fractional reserve banks that expand money and credit overseen by a central bank that controls inflation to the amount necessary to accommodate a growing volume of trade. One who argues for such a system is a pragmatic inflationist in the same mold as Irving Fisher, Milton Friedman, and others of the modern monetarist school of thought. Moreover, like Friedman, Smith asserts that inflation from such a system will be neutral to the rate of interest and, thus, not introduce detrimental "real" effects on the economy (p. 56).

"The Historical Foundations of Austrian Economic Value Theory," by Gregory M.A. Gronbacher, attempts to discover whether "the philosophical roots of the Austrian School of economics are primarily located in the work of Austrian philosopher Franz Brentano" or whether "Austrian economics is primarily influenced by Germanic philosophy" (p. 62). Although the author himself acknowledges that "[t]his study provides no specific evidence of direct influences between the thinkers presented" (p. 75), this does not hamper him from claiming, "Many Austrian thinkers, especially von Mises, were influenced by Brentano and his subjectivist value philosophy which can trace its own roots back to scholastic philosophy and Aristotle" (p. 76).

Gronbacher’s article does provide us with interesting insights about the similarities regarding theory of value in the works of Aristotle, the Late Scholastics, Brentano, and Menger. But due to the original intention of this volume, it would seem more appropriate to at least expand the coverage to the theory of prices.

In his "Islam and the Medieval Progenitors of Austrian Economics," Imad-ad-Dean Ahmad "would like to place some of the early ‘proto-Austrian’ achievements which Rothbard uncovered alongside the work of the classical era Muslims."

well aware of the role of supply and demand in the prices of goods in general . . . he argues (The Muqaddimah: An Introduction to History: 366-337) that "commerce means the attempt to make a profit by increasing capital, through the buying of goods at a low price and selling them at a higher price. . . . The accrued (amount) is called ‘profit’ (ribh). He distinguishes this from gambling or robbery on the grounds that it "does not . . . mean taking away the property of others without giving them anything in return. Therefore it is legal" (p. 83).

As with Gronbacher, Imad-ad-Dean Ahmad informs us that "the birth of Salamanca school followed the reconquista of Spain from the Muslims." This is reflected in its original Arabic name—University of Alcalá. So we can suspect that the Scholastics have been exposed to the work of Greek philosophers not only directly but also indirectly through Muslim scholars.

The last chapter is by Richard H. Timberlake, who, as he himself notes, had some differences with Murray Rothbard. But they were also "allies in what [they] both regarded as the most persistent and threatening development in modern times: the extension of government hegemony at the expense of individual freedom, creativity, and self-direction" (p. 87).

Timberlake criticizes Menger, who rightly recognized that government "had nothing to do with the evolution of money. . . . Menger next suggested that the state might contribute significantly to the acceptability of money by making any enduring money legally binding." With the establishment of legal tender (which is implied by Menger), the state first "provided a means for exploiting the booty from military conquest and mining enterprises," and, second, "facilitated the state’s collections of tribute and taxes." Thanks to the existence of legal tender, the state can impose on its citizens a new kind of tax—seigniorage, which is the difference between the face value of a bank note or coin and the costs to produce it.

The second important mischievous act of state intervention in the monetary system has been the origin of the central bank. Timberlake corrects the mistaken presumption held by the majority of banking historians that "monetary powers had been formally granted to these institutions." He is correct to say that this view is nothing but the  post hoc ergo propter hoc fallacy at work. Timberlake explains:

The contemporary central bank was not originally designed as an institution that would control the monetary system to which it was appended. Both the Bank of England and the First and Second Banks of the United States were chartered only as extra large commercial banks and as public banks with fiscal responsibilities to the Exchequer and Treasury Departments. They had special privileges—monopoly of note issue, government deposits of tax moneys, and branching opportunities, which were denied their private competitors. At the same time, they were specifically proscribed from any monetary activism. However, they became central banks when a banking panic or liquidity crisis thrust them into prominence, because they had the only reserves that could save the banks and everyone else (p.91).

These institutions of evil create inflation over the world and are "the ultimate ‘sophisticated’ example of the rule of men usurping the rule of law."

There are high and low points in this volume, but overall, The Contributions of Murray Rothbard to Monetary Economics is a good effort. It provides the reader with some interesting thoughts on a range of Rothbardian-style issues that are by no means restricted to matters of monetary economics.

Martin Stefunko holds a PhD in Economic Theory and History of Economic Thought from the University of Economics in Bratislava, where he also earned his M.A. in Finance, Banking, and Investment.