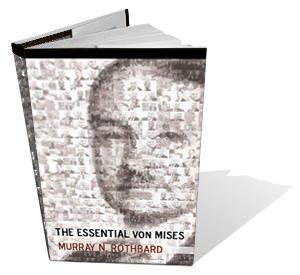 Two festschrifts have been issued in honor of the great economist Ludwig von Mises, now in his 92nd year. On Freedom and Free Enterprise, edited by Mary Sennholz, first appeared in 1956, and contained essays by 19 distinguished scholars. The second appeared in 1971, on the occasion of Mises's 90th birthday of that year. It was in two volumes and carried essays by no fewer than 66 contributors from 17 countries. Both publications contained many fine essays. In addition, there have been other tributes to the achievements of Ludwig von Mises.

But no one has yet done what Murray N. Rothbard has so brilliantly succeeded in doing in The Essential von Mises, a little tribute of about 11,000 words. He has given us, in a brief but remarkably comprehensive form, an outline of Dr. Mises's outstanding contributions to the sciences of human action. Biography, history, exposition and criticism are superbly interwoven.

Dr. Rothbard begins with the birth of Mises in 1881 in Lemberg and reminds us that Mises grew up during the high tide of the Austrian School of economics. He describes what this was, contrasts it with the classical Ricardian economics that it displaced, and explains what Carl Menger and Böhm-Bawerk, Mises's teacher, had already contributed.

Then, point by point, tells us how Mises pushed beyond this: his unification of monetary theory with the Austrian analysis, his new theory of business cycles, his demonstration that socialism was not a viable system because it could not solve the problem of economic calculation, his great contributions to methodology, and a score of other illuminations to be found especially in his three masterpieces, The Theory of Money and Credit, Socialism: An Economic and Sociological Analysis, and Human Action.

Rothbard's pamphlet is a beautiful exposition of Mises's thought and an admirable introduction to his writings. It is more than that. It is a compact history of economics since the 1880s; it pays tribute to others who made contributions; and it briefly indicates the fallacies in such fashionable diversions as Keynesianism, institutionalism, econometrics, and mathematical economics.

But with all the territory that it covers, it never loses sight of Mises the man, reacting "to the darkening world around him with a lifetime of high courage and personal integrity," never bending to the winds of change, never swerving a single iota from pursuing and propounding the truth as he saw it, and never complaining about the shameful neglect of his contributions by the bulk of the academic world.

Rothbard concludes by quoting a tribute from the eminent French economist Jacques Rueff.

Ludwig von Mises has safeguarded the foundations of a rational economic science… By his teachings he has sown the seeds of a regeneration which will bear fruit as soon as men once more begin to prefer theories that are true to theories that are pleasing. When that day comes, all economists will recognize that Mises merits their admiration and gratitude.