Rothbard on Panic Then and Now 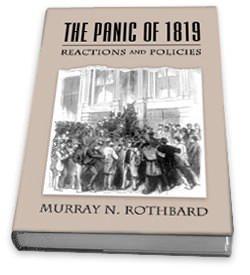 Murray Rothbard's Panic of 1819, written for his dissertation and originally published in 1962, provides a window to an era when there was once a vibrant and well-articulated public debate on monetary policy measures. Fortunately, it was rereleased by the Ludwig von Mises Institute in hardback in 2007.

Rothbard's detailed review of the many specific actors in the debate of the early 1800s, when the banking system was in its formative stage, suggests that policy discussions back then were more sophisticated than now.

The 1819 crisis occurred five years after the suspension of the customary legal requirement to redeem banknotes with specie. During these years of continued inflationary policy, credit expanded largely because of the 1816 ramp-up of the second Bank of the United States. It reloaded state-bank coffers and issued notes, and, by 1818, built a pyramid of over $60 million of new obligations atop its meager $2.5 million specie base.

A second crisis overwhelmed the markets. The central bank called loans to meet payment for the Louisiana Purchase. The public came to its senses, realizing that circulating paper could not hold its value relative to a veneer of gold intended to be held by banks for occasional redemption requests.

The bubble of paper — amassed to support the competitive development of fertile river-bottom farmland in frontier areas — rapidly deflated. Half the debt from the purchase of public land had originated in Alabama, and by 1821 some 60 percent of it had been liquidated (pp. 65, 71). The will to push remedial steps only became urgent after the collapse.

In 2008, the Fed likewise intervened to save the ruination of banks unable to back their deposits from having overextended credit. While adding reserves is not the same as specie suspension, both share a common artificiality that permits continued market functioning, but retains a high level of indebtedness that merely postpones a catastrophe.

One popular measure considered after 1819 was the "loan-office" solution, which was adopted in several states. These schemes provided liquidity for stretched borrowers. The trick was to have the government compel creditors to accept certain sanctioned state-bank notes in payment in lieu of specie, an ironic stance since these institutions had leveraged their reserves to issue paper in payment for public lands in the first place.

Certain states went beyond this, printing "inconvertible paper" to circulate during the emergency. Missouri's money supply collapsed by $1 million, roughly five-sixths of the total, so the state created $300,000 of inconvertible currency, whose only value was by government decree and acceptance for tax liability. Ardor for this solution was stoked by antibullionists such as Thomas Law, husband to Martha Washington's daughter. Law went much further when he proposed the socialization of banking by backing national currency with treasury debt. Federal loans carrying interest rates between 2.5 percent and 4 percent would underpin opportunities for state banks to lend to citizens at a 5 percent rate, and interest rates could be managed in a crude open-market operation of exchanging between state and federal notes to arbitrage unwelcome divergences.

He further recommended $100–150 million in new national, inconvertible paper, and some $5 million of "pump priming" for construction of canals, bridges, or other projects could be funded annually through additional printing (p. 150).

North Carolina heard a call to "throw money into circulation for public works," and in 1820 Pennsylvania passed a law to use state money to fund "internal improvements," presaging the gross ballooning of expenditure to come in the 1830s, which triggered the national monetary meltdown in 1837.

Treasury Secretary Crawford, who hailed from northern Alabama, wrote a scheme similar to Thomas Law's preference for centrally managed credit. Titled the "Report on the Currency," he eventually rejected his own conclusions, because he acknowledged government would always be tempted to issue too much money, and Treasury bonds were inclined to drop in value when the state was faced by large unexpected outlays, for war in particular.

However, sophisticated inflationists acknowledged that bank credit caused business cycles (having created the new phenomenon of widespread urban unemployment in the 1819 crisis). They confidently proclaimed government would be the solution since only it could capably maintain the value of paper money while that of specie had a tendency to vary in purchasing power.

Inconvertible paper was attacked by articulate statesmen such as Thomas Ritchie, who warned against "paper thermometers" whose interest rates would fluctuate and signal a need for centrally coordinated monetary intervention. Many hailed from the hard-money hotbed of Virginia, but, interestingly, those who took sides split evenly on either side of rural and urban, southern and eastern, or rich and poor political wedges.

Thomas Jefferson sought a plan to eradicate paper money, penning the "Plan for Reducing the Circulating Medium," which envisioned a five-year phase out that would compel Virginia banks to cancel 20 percent of their notes each year (p. 184).

Other presidents, such as William H. Harrison, James K. Polk, and Andrew Jackson, were notable bullionists, and their opinions echoed declarations such as that by Spencer Roane, Chief Justice of the Virginia Court of Appeals: "banking is an evil of the first magnitude."

In addition to journalists and politicians, Rothbard catalogs a cacophony of voices stressing the immorality of lending demand deposits, especially in multiples of their underlying specie reserves. These voices were disseminated through the press under monikers like "Senex," "Plain Sense," or "A Merchant."

Perhaps the most poignant was Davey Crockett, who quipped, "the whole banking system [is] a species of swindling on a large scale." By 1834, Andrew Jackson would prevail over the second United States bank, whose reputation had become tarnished by revelations that its stock had not been purchased with specie, and by the great stress it caused through calling in state-bank loans. Eventually the bank would be shown to be corrupt and responsible for extending credit well beyond its means.

Pro-tariff forces thought their solution to the crisis would stimulate local consumption and help preserve specie within the United States for use in manufacturing investment. They often sympathized with inflationists, who thought adding money would supply capital for business to expand. Such conclusions would shift by the 1930s, when inflation of the money base was viewed chiefly as a method to augment consumption.

Although deep, the crisis of 1819 passed swiftly. By 1821 a recovery was well underway and most policy solutions had been abandoned after weak and spotty implementation. One exception was the tariff, which would see rates raised from 25 percent to 33 percent upon passage in 1824, after a narrow defeat suffered by the Baldwin Tariff Bill in 1820. Southern opposition was near unanimous.

The crisis of 2008 was also sudden, and it had the potential to spawn a meltdown as severe as that seen after 1819. But like the suspension of specie payment by banks enacted in 1814, today's Federal Reserve actions might prolong risk-taking and debt pyramided upon a thin reed of equity.

A repeat of the eventual systemic collapse of 1819 might be forthcoming. Commercial and consumer loan demand has weakened recently.

No analogy is perfect, but it is still not comforting that the solutions advanced by antibullionists of that bygone era closely resemble those adopted in the 1930s or today. In the present era, Fannie Mae, Freddie Mac, and the Federal Housing Administration compare with the loan-office solution. Specie suspension resembles the massive plugging of the hole in the banking system's balance sheet with temporary reserves. The use of newly minted, inconvertible currency for priming the pump with "internal improvements" is a Keynesian game plan invented more than one hundred years before its time. 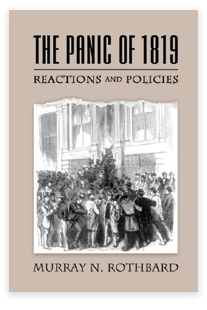 Rothbard's usual thorough documentation of the actions of specific players helps us step into the past and relive it almost as if we were in a parallel universe. The contrast between the sophistication of the debate then and the pabulum of the modern-day media is stark.

The vigorous debate of the early 19th century, usually performed out in the open in legislatures and in newspapers, makes the scripted, press-covered appearances of Fed and Treasury officials seem effete. The observers today most reminiscent of our forefathers are the armies of tea partiers and bloggers, incensed that Main Street has gotten the shaft, first from the evils of hyperextended credit, and doubly now that modern solutions may prolong the madness.

Bill Baker is the founder of Gaineswood Investment Management and GARP Research. His real world experience as an institutional analyst and portfolio manager has built upon a deep curiosity of economics and history, leading him to adopt an Austrian perspective. As an economics major at University of Pennsylvania he developed a strong interest in the Great Depression, and this line of inquiry combined with his intimate knowledge of financial markets led him to author Endless Money, which was published by Wiley & Sons in 2009. He is also a graduate of The Amos Tuck School at Dartmouth College.