Röpke Stood Against the Tide On a recent journalistic junket to West Germany the group with which I was traveling had a mass interview with Ludwig Erhard, the former chancellor who, as Dr. Adenauer's Minister of Economics in the first post World War II government of his country, was responsible for the "German economic miracle." The talk turned to the young who, in West Germany as elsewhere, have been confusing freedom with anarchy. I had one particular question I wanted to ask Dr. Erhard: "Do the young, in the German universities, study any of your old masters in economics such as Wilhelm Röpke?"

The answer, which came with a sort of weary benignity, was that the young economics students didn't seem to be interested in the principles of the "free social market." They were interested in reducing economics to mathematics. Personalities such as Mises, Menger, and Röpke were not in the fashion. If it had been that way when he was a student, said Dr. Erhard, he would never have become an economist. He would not have been able to pass examinations.

This business of reducing economics to mathematics is part of the disease of the Western world. The modern economist tends to think in terms of "input" and "output" and "aggregates." The question of who directs and disposes the "input," and how title to the "output" is acquired or allocated, is dismissed as irrelevant to the problem of seeing that "aggregate" purchasing power, or "aggregate" investment, is kept at a "full-employment" level. The whole business of human incentives, the question of the human will, tends to disappear from the subject of economics; the individual is lost in the sea of statistics.

Paradoxically, this can have a tremendous effect on the integers that go to make up the statistical totals, for the mathematical economist, by making the human terms of "input" irrelevant, may be striking most deleterious blows at individual creativity.

It can matter much to the inventor in his shop, or the chemist in his laboratory, that he be allowed to seek support from individuals rather than faceless bureaucrats. The beguiling breakthrough that ultimately develops into a new "ladder industry," capable of lifting a nation out of depression, is never a "statistic" at its birth; the quantifying economist only catches up with it after a lot of qualitative things have happened.

This is what Dr. Erhard was trying to tell the visiting US journalists through the fog of translation. It so happened that I had been reading Wilhelm Röpke's Against the Tide before coming to Germany. My question to Dr. Erhard had been prompted by a passage in Gottfried Dietze's foreword to the Röpke essays.

Röpke warned against the advocacy of a planned economy and expressed the fear that planning and collectivism would prevent the economic recovery that he felt was inevitable under a free economy. The correctness of his opinion was first demonstrated in Germany. His friend Ludwig Erhard … has told how during the war he illegally got hold of Röpke's books, the contents of which he "devoured like the desert the life-giving water." Erhard repeatedly emphasized his debt to Röpke when, against the opposition of the military government, he introduced the market economy in West Germany … the enormous success of the 'socially responsible market economy' … deprived Western socialist programs of their appeal. After the success of that economic system had been demonstrated in Germany, Röpke's friend and colleague Luigi Einaudi, the first president of postwar Italy, imitated the German economic policy in his country … Other nations … followed suit. A continent that after World War II lay dying recovered in freedom.

Röpke, then, played a part in twentieth-century history that was of the first magnitude, comparable to the role of a Lenin after World War I, though with a different end in view. An individual who talked in terms of qualitative decisions, he had an effect on "input" and the "aggregates" of investment and consumption in West Germany, Italy, and elsewhere that surprised and flabbergasted the Keynesians and the neo-Marxists. He gave socialism its first big setback and thereby may have changed the course of history.

Against the Tide represents many facets of Röpke's intellectual armory. Some of the essays are dated; the long discussion of "the transfer problem in international capital movements," which opens the book, becomes burdensomely technical, and despite the fact that it was written in pre-Hitlerian 1930, it could hardly have been an example of the Röpke that stimulated Dr. Erhard to face down the American Keynesians who tried to keep the free market from re-emerging in post-Hitler 1948 in the shattered Rhineland.

But the second essay, "The Intellectuals and Capitalism," dated 1931, is Röpke at his best. Röpke was combatting the German version of Rexford Tugwell's idea that capitalism must die when the economy becomes "mature." In pre-Nazi Germany economics had become crossed with geopolitics to produce a theory that national salvation resided in a certain "space" in the Danube countries and the Ukraine. If this space could not be seized, Germany would die for lack of markets and sources of raw material.

The members of the Tat circle spoke of expanding in space to create a "want satisfaction economy," an "organic economic community," which would help "the mass of the unpropertied peopIe growing into the state." Röpke punctured this whole tissue of catch phrases by observing that small countries such as Denmark, Holland, and Switzerland managed to do very well without "space," or "space building."

In another essay, "The Secular Significance of the World Crisis," written in 1933 when an "end-of-the-world" mood prevailed in both Europe and America, Röpke doubted that there were structural, as contrasted with cyclical, reasons for the depression. The hypothesis that capitalism had failed because of a shortage of gold "was faulted from the outset by its failure to explain why, nevertheless, the volume of money and credit was able to expand so much immediately before the outbreak of the crisis." (As William Graham Sumner had said long before Röpke, the amount of money in a country is sufficient to do the work of the country.)

As for the theory that declining populations meant a declining capitalism, Röpke remarked that this was to "confuse people with Reichsmarks and dollars." Obviously, purchasing power depends on the money in people's pockets, and a small, rich population makes a better soil for capitalism than a huge, poverty stricken mass such as one finds in India or China. Röpke admitted that some needs are inelastic. The number of Christams trees that can be sold is determined by the number of families who celebrate Christmas are inelastic. "On the other hand," so Röpke said, "the value and amount of presents lying under the Christmas tree vary from one family to another in accordance with the breadwinner's income. Even if the production increased a hundred times, it would still fail to raise the incomes of the masses to a level that is regarded as necessary to the high income brackets today."

Faulty Understanding of the Economics of Freedom

If lack of geographical space, or lack of precious metals, or a fall-off in population, couldn't explain the depression, what did? Röpke decided that the world's troubles in 1933 were due to a faulty understanding of the economics of freedom. He held to this opinion during his long period of exile from Germany in Turkey and Switzerland. And, when the opportunity presented, he managed to convince Dr. Erhard that he was right and the Tugwellians and the Keynesians were wrong. Not even World War II had resulted in the "end of an era." 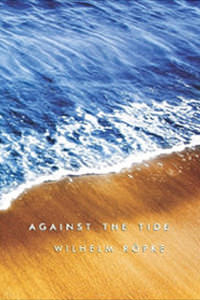 The later essays in Against the Tide attack the problem of inflation, which seems inseparable from the growth of the welfare state. Röpke is not against a basic humanitarianism; he doesn't want to see helpless people starving. But he sees little sense in "robbing Peter to pay Paul" when Paul is just as capable of supporting himself as Peter.

"We are in the predicament of the sorcerer's apprentice," he wrote a few years before he died; "almost anywhere we turn our horrified eyes, we see that the welfare state has a built in, irresistible tendency to further growth." The welfare state, he said, operates without a brake or a reverse gear.

Unfortunately, welfarist ideas are still careening down the highway with as much dangerous momentum as was the case when Röpke was still alive. The more reason, then, to repeat the experience of Dr. Ludwig Erhard when he devoured Röpke "like the desert the life-giving water."